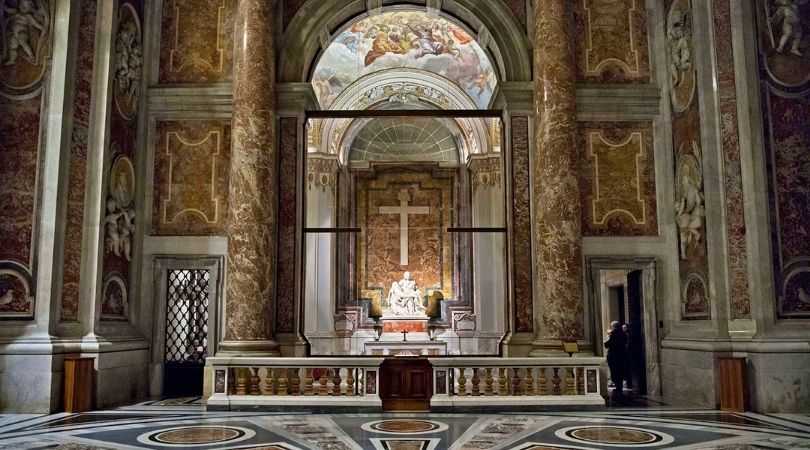 VATICAN CITY (ChurchMilitant.com) - A Vatican Secretariat of State memo has abolished "individual" Masses celebrated at numerous side altars in St. Peter's Basilica and restricted the Traditional Latin Mass (TLM) to a single altar in the basilica's crypt.

The unsigned order, effective March 22, ends the centuries-old practice of Masses by priests celebrating alone, ostensibly "to ensure that the holy Masses in the Basilica of St. Peter's are conducted in a climate of recollection and liturgical decorum."

The diktat banishes the TLM to the tiny Clementine chapel of the Vatican grotto and orders its celebration exclusively by "authorized priests" at four specific times from 7–9 a.m.

"Lone" priest-celebrants celebrating either the TLM or the Novus Ordo (New Rite) will be compelled to join "concelebrations" of the Novus Ordo, according to the order.

Multiple sources confirmed to Church Militant the authenticity of the Vatican document after intense speculation on social media Friday evening and the refusal of the Holy See Press Office to respond to media queries.

"The document is now hanging in St. Peter's sacristy," sources told Church Militant after two priests in the Curia who regularly celebrate alone at side altars said they were shocked and had not yet been informed of the memo.

A top Rome-based canonist questioned the validity of the document: "If the author cannot be identified, the decree is invalid because it is lacking an essential element of a juridical act."

The text is signed by an unidentifiable, unnamed individual, who appears to be of the First Section General Affairs of the Secretariat of State headed by Venezuelan-born Abp. Edgar Peña Parra, currently under investigation for allegations of sodomy, abuse and corruption.

"Secondly, the decree is invalid in my professional opinion because it is insufficiently motivated," the canonist noted. "It is res inaudita (unheard of) for the Secretariat of State to prohibit 'unauthorized' Masses in the sacrosanct basilica of St. Peter."

"What are the real reasons behind such an abuse of power and power grab on the part of unnamed individuals of the Secretariat of State?" the canon law expert asked.

"The beautiful tradition of priests celebrating private Masses at side altars of St. Peter's Basilica — as they have for over a thousand years — so edifying to early-morning visitors, is under threat, apparently because someone wants to promote the concelebration of Mass in a quite-coercive way," Dr. Joseph Shaw, chairman of the Latin Mass Society of England and Wales, told Church Militant.

"Regular or visiting priests who wish to celebrate the Ordinary Form will henceforth be obliged to join a limited number of scheduled Masses unless they have with them a group of pilgrims," said Shaw, a fellow of the prestigious Royal Society of Arts. "Four slots for the Extraordinary Form (TLM) are also made available, almost, it seems, as an afterthought."

The motivation for this move appears to be the enforcement of what has been described in various documents as a "preferable" option, when two or more priests desire to celebrate Mass, for them to concelebrate. This is found in official documents as far back as 1967, though the practice of priests concelebrating with each other is a complete innovation of the same decade. The only historical precedents for the practice are of priests assisting bishops.

The arguments for concelebration as the "preferred option" are undermined by the fact — which Pope Benedict reiterated in 2007 (in Sacramentum Caritatis) — of "the objectively infinite value of every celebration." Given the value of each Mass, reducing the number of Masses by having several priests concelebrate just one, instead of celebrating several individual ones, is clearly a retrograde step.

In addition to scheduled Masses offered daily at the main altars of the basilica, St. Peter's 45 altars and 11 chapels are frequented every morning by clergy — often by priests working in the Vatican's Curia — to celebrate their daily Mass.

The tradition of priests celebrating private Masses is under threat because someone wants to promote the concelebration of Mass in a quite-coercive way.

The memo is directed at "canceling" the TLM from St. Peter's Basilica by making it "virtually invisible" to tourists and Catholics entering the shrine, a Curial priest said. "Pope Francis is literally driving traditionalist Latin Mass Catholics underground and into the catacombs."

Others have suggested that the newly appointed modernist archpriest of St. Peter's Basilica, 55-year-old Cdl. Mauro Gambetti, is responsible for the "traditionalist purge."

However, the controversial memo is not addressed to Gambetti, but to the Extraordinary Commissioner of the Fabric of St. Peter's Basilica, Abp. Mario Giordana, whose department does not deal with the basilica's liturgies but with its conservation and maintenance.

The memo also requires "lectors and cantors" to be present at the "authorized" Masses, leading to suggestions that Pope Francis intends to increase the visibility of laywomen at St. Peter's Basilica as a model for other churches to emulate, following his January changes to the Code of Canon Law institutionalizing female lectors and acolytes.