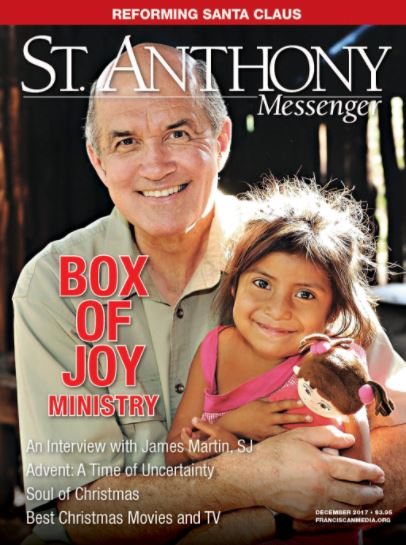 The December issue features an interview with celebrity Jesuit Fr. James Martin, best known for his attempts to normalize homosexuality in the Church. In addition to promoting transgenderism in children, Martin has also said homosexuals are not bound to Catholic teaching on chastity, and has promoted notorious, dissident Catholic leaders, including one who blasphemed that "Jesus is queer."

And the June 2017 issue of St. Anthony Messenger devotes a four-page spread to Fr. Thomas Rosica, founder and CEO of Canada's Salt + Light TV, a priest also known for promoting homosexuality. Titled "God and I," the piece is a wide-ranging interview with the Basilian Father, who offers insights into his priesthood, his writing and the purpose of Catholic media.

Church Militant sent a media query to Franciscan Media earlier this year, asking whether it was aware that Rosica highly praised defrocked priest Gregory Baum, now deceased, who led the vanguard of dissent against Humanae Vitae in the 1960s, served as theological advisor to the dissident Winnipeg Statement, and published an autobiography admitting to having led a life of active homosexuality for many decades while married to his wife, ex-nun Shirley.

In spite of Baum's confession, Rosica has refused to retract his praise. Rosica was also known for pushing a homosexualist narrative at the 2014 and 2015 Synods on the Family. Bishops approached Church Militant privately at the time and disclosed that what Rosica was saying from the podium on homosexuality did not match what the bishops were discussing in their small circle groups.

Feister conducted the interview with Fr. Martin, which revolves around his book Building a Bridge, criticized by leading prelates like Vatican liturgy chief Cdl. Robert Sarah for failing to discuss Church teaching on chastity (a deliberate omission by Fr. Martin, who claims he's no "moral theologian" and therefore not qualified to speak on the topic).

The sympathetic interview allows Martin to again dodge the question of Church teaching on sexuality, instead featuring his common response of blaming the "institutional Church" for "marginalizing" the LGBT community.

Asked whether Pope Francis is "endorsing the gay lifestyle" by his infamous "Who am I to judge?" remarks in 2013, rather than directly answering the question, Martin responds with a series of questions himself.

"Well, it depends on what you mean by the gay lifestyle," Martin tells Feister. "What does that mean? Does it just mean living as a gay person? Does that mean engaging in same-sex relations? Does that mean getting married?"

He goes on to claim that the pope is "trying to move us away from this idea of judging LGBT people as sinners or as the worst sinners."

Fr. Martin: It's the institutional Church that has marginalized the LGBT person, not vice versa.

One reader reacted to Feister's interview: "I expected a deep discussion, and all I got was softball questions tossed up for Father Martin to answer with the same ambiguity or downright falsehoods, and now one pushes for a deeper answer. This is propaganda."

Established in 1893, Franciscan Media styles its publication St. Anthony Messenger "the number-one national Catholic family magazine," boasting its company's media reach to "literally millions of people each year, across the globe with the liberating message of Jesus Christ — in the spirit of St. Francis of Assisi, founder of the Franciscans." It operates as a non-profit run by the Franciscan Friars of St. John the Baptist Province in the Order of Friars Minor.

Like so many religious orders today, the Order of Friars Minor is widely known to have strayed far from its founder's intentions, its focus now largely on social justice issues like climate change, immigration, poverty and the like. The St. John the Baptist Province follows that lead, with its "Peace and Justice" page devoted to issues like "Greening Thanksgiving," protesting pollution and promoting immigration, among others.

A cursory search of the website reveals no discussion of intrinsic evils like abortion or same-sex marriage, but much ink spilled on "caring for creation" and eliminating poverty.

Feister has solicited feedback from readers as to how the magazine can best serve its audience. Catholics can send comments to info@franciscanmedia.org.