It outrages God more than all other mortal sins

Unworthy Communions are frequent. How many have the temerity to approach the holy table with sins hidden and disguised in confession! How many have not that sorrow which the good God wants from them, and preserve a secret willingness to fall back into sin, and do not put forth all their exertions to amend! How many do not avoid the occasions of sin when they can, or preserve enmity in their hearts even at the holy table! If you have ever been in these dispositions in approaching Holy Communion, you have committed a sacrilege — that horrible crime, on the malice of which we are going to meditate. 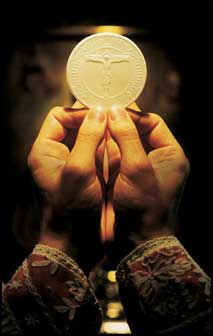 2. Whoever communicates unworthily crucifies Jesus Christ in his heart. He submits Him to a death more ignominious and humiliating than that of the Cross. On the Cross, indeed, Jesus Christ died voluntarily and for our redemption; but here it is no longer so: He dies in spite of Himself, and His death, far from being to our advantage, as it was the first time, turns to our woe by bringing upon us all kinds of chastisements both in this world and the next. The death of Jesus Christ on Calvary was violent and painful, but at least all nature seemed to bear witness to His pain. The least sensible of creatures appeared to be affected by it, and thus wishful to share the Saviour's sufferings. Here there is nothing of this: Jesus is insulted, outraged by a vile nothingness, and all keeps silence; everything appears insensible to His humiliations. May not this God of goodness justly complain, as on the tree of the Cross, that He is forsaken? My God, how can a Christian have the heart to go to the holy table with sin in his soul, there to put Jesus Christ to death?

3. Unworthy Communion is a more criminal profanation than that of the holy places. A pagan emperor, in hatred of Jesus Christ, placed infamous idols on Calvary and the holy sepulchre, and he believed that in doing this he could not carry further his fury against Jesus Christ. Ah! Great God! Was that anything to be compared with the unworthy communicant? No, no! It is no longer among dumb and senseless idols that he sets his God, but in the midst, alas, of infamous living passions, which are so many executioners who crucify his Saviour. Alas! What shall I say? That poor wretch unites the Holy of Holies to a prostitute soul, and sells him to iniquity. Yes, that poor wretch plunges his God into a raging Hell. Is it possible to conceive anything more dreadful?

4. Unworthy Communion is in certain respects a greater crime than the deicide of the Jews. Saint Paul tells us that if the Jews had known Jesus Christ as the Saviour they would never have put Him to suffering or death; but can you, my friend, be ignorant of Him Whom you are going to receive? If you do not bear it in mind, listen to the priest who cries aloud to you: Behold the Lamb of God; behold Him that taketh away the sins of the world." He is holy and pure. If you are guilty, unhappy man, do not draw near; or else tremble, lest the thunders of Heaven be hurled upon your criminal head to punish you and cast your soul into Hell.

5. Unworthy Communion imitates and renews the crime of Judas. The traitor, by a kiss of peace, delivered Jesus Christ to his enemies, but the unworthy communicant carries his cruel duplicity yet further. Having lied to the Holy Ghost in the tribunal of penance by hiding or disguising some sin, he dares, this wretch, to go with a hypocritical reverence on his face, and place himself among the faithful destined to eat this Bread. Ah! No, nothing stops this monster of ingratitude; he comes forward and is about to consummate his reprobation. In vain that tender Saviour, seeing that he is coming to Him, cries from His tabernacle, as to the perfidious Judas: "Friend, whereto art thou come? What, thou art about to betray thy God and Saviour by a sign of peace? Stop, stop, my son; I pray thee spare me!" Neither the remorse of his conscience nor the tender reproaches made him by his God can stop his criminal steps. He steps forward. He is going to stab his God and Saviour. O Heavens! What a horror! Can you indeed behold this wretched murderer of your Creator without trembling?