The Catholic Church is calling upon God's foster father under the title of St. Joseph the Worker to combat the evils of socialism and especially atheistic socialism, which is Communism.

In 1955, Pope Pius XII instituted the feast of St. Joseph the Worker on May 1 to counteract the Socialist and Communist holiday of "International Workers Day" also known as May Day. He was building on the devotion developed by his predecessor, Pope Pius XI, who in his 1937 encyclical Divini Redemptoris wrote:

To hasten the advent of that "peace of Christ in the kingdom of Christ" so ardently desired by all, We place the vast campaign of the Church against world Communism under the standard of St. Joseph, her mighty protector. He belongs to the working-class, and he bore the burdens of poverty for himself and the Holy Family, whose tender and vigilant head he was. To him was entrusted the Divine Child when Herod loosed his assassins against Him. In a life of faithful performance of everyday duties, he left an example for all those who must gain their bread by the toil of their hands. He won for himself the title of "The Just," serving thus as a living model of that Christian justice which should reign in social life.

Pius XI was, himself, building on the devotion forged by his predecessor Pope Benedict XV, who in his 1920 motu proprio Bonum Sane turned to St. Joseph to fight the evils of socialism:

The advent of a certain universal republic ... which is founded on the absolute equality of men and on the communion of goods, and in which there is no longer any distinction of nationality, does not recognize the authority of the father on the children, neither of the public power on the citizens, nor of God on the men gathered in civil consortium.

We, therefore, most worried by the course of these events ... remind the children of the Church of their duty ... who earn their bread with labor, to keep them immune from the contagion of socialism, the bitter enemy of Christian principles, We with great solicitude recommend them in particular to St. Joseph, to follow him as their guide and to receive the special honor of his heavenly patronage.

Watch the panel discuss the role of God's foster father in The Download—St. Joseph the Worker. 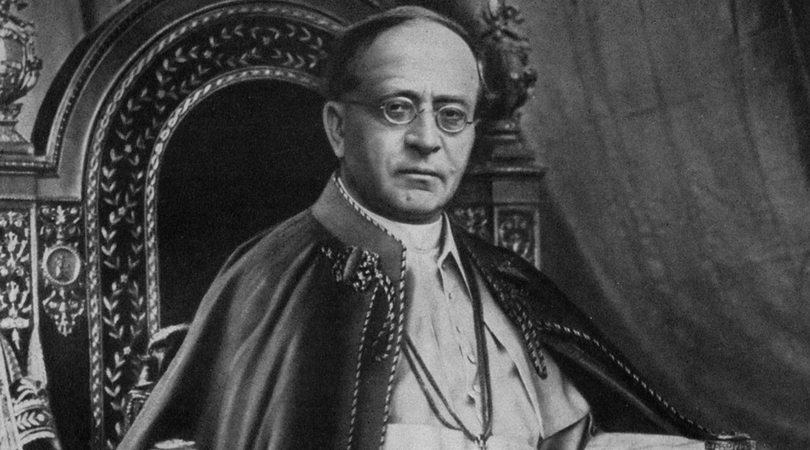