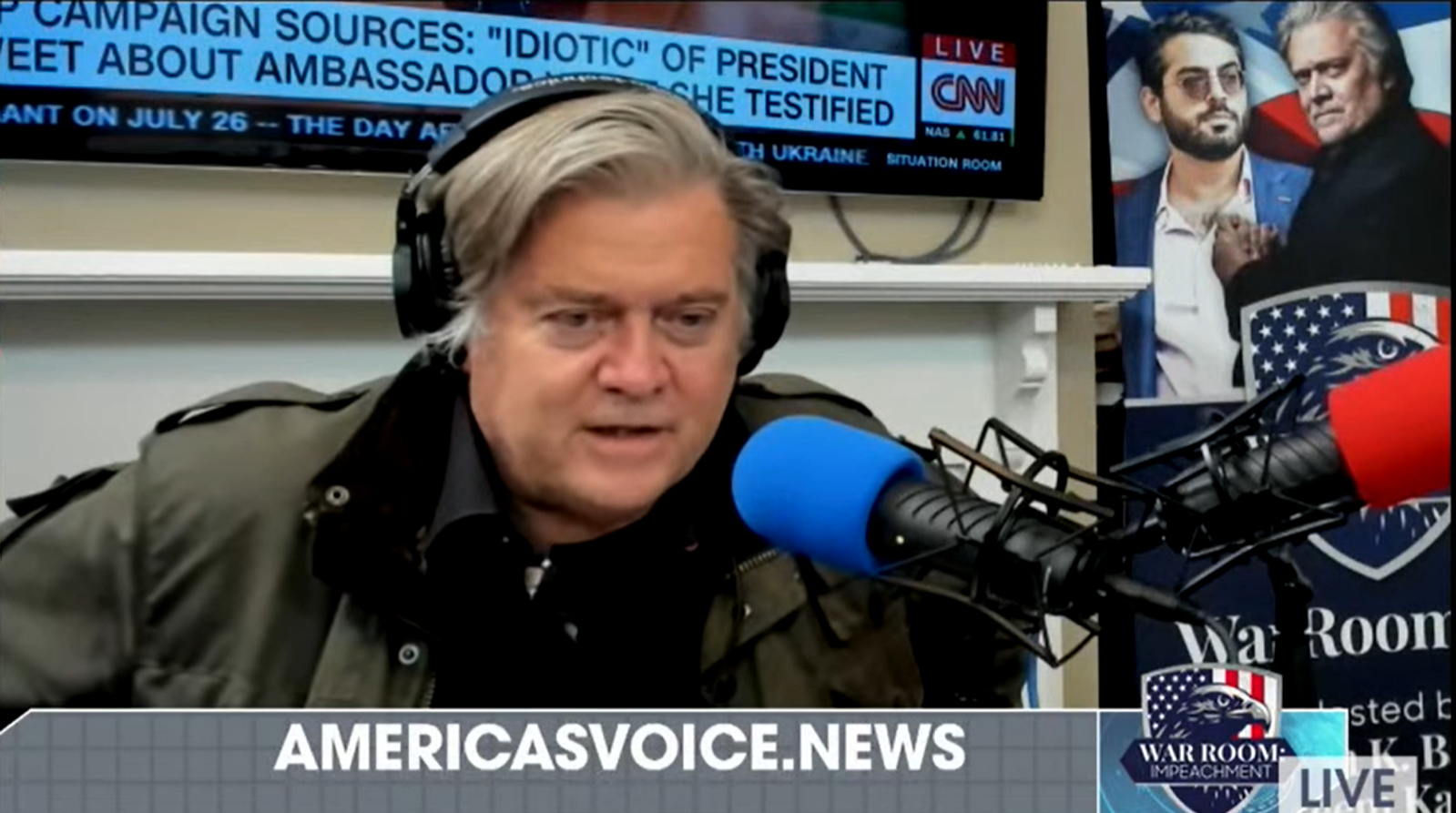 Stephen K. Bannon is back. He's returned to the United States and to the basement of the Breitbart Embassy in Washington, D.C., where he's producing a 9 a.m. and 6 p.m. EST twice daily podcast called War Room: Impeachment.

Episode One aired on Oct. 22. The podcast will continue until the day after Trump's hoped-for acquittal. The New York Times is reporting that War Room: Impeachment wants to "nudge the White House, its allies and the president himself into taking a more focused and aggressive posture to undermine the inquiry currently underway in the House of Representatives."

This is as hardball as it gets.

President Trump has been reluctant to establish a war room to fight impeachment. He believes it's more important for voters to see him focused on the nation's business and not hunkered down managing a roomful of strategists. He has been called a one-person war room fighting almost exclusively with a single weapon: his Twitter account. That's one of the things that made Bannon nervous and brought him back from Europe to the United States.

Bannon believes the president's Twitter account doesn't bring enough firepower to the impeachment battle, nor is it enough to label the impeachment proceedings "fake news." And "nudging" the president is too subtle. Bannon recently told his audience, "This is as hardball as it gets. They [the Democrats] are trying to overturn a federal election of the President of the United States. ... We're trying to coach you up in political warfare, information warfare."

A 2015 Bloomberg article described Bannon as "a mile-a-minute talker who thrums with energy, his sentences speed off ahead of him and spin out into great pileups of nouns, verbs, and grins."

Listening to War Room: Impeachment is kind of like riding behind Trinity on the Ducati 996. It's very fast and there's a lot at stake. You don't have time to enjoy the scenery; but while you’re holding on for dear life, you'll have the chance to eavesdrop on the kind of inside baseball political analysis you can't hear anywhere else.

One of Bannon's favorite podcast interjections is "We need killers!" by which he means, Trump needs on-camera media spokespersons who can destroy the political opposition quickly and move to the next target without having to waste a breath  He and his guests identify who the "killers" are. They tell the audience who they believe are the most effective spokespersons and who are only meh.

Bannon is joined each day by Raheem Kassam, editor-in-chief for Breitbart News London, and Jason Miller, chief spokesman for the 2016 Trump campaign and transition. These men are all political warfare veterans who have served in the trenches together and trust one another. They are joined by political heavy-hitters who walk across the street from the Capitol building during hearing breaks to the Breitbart Embassy basement, where they discuss what they just heard.

To be honest, you need to be a true political junkie to know the names and significance of some of the podcast guests, so expect to be clueless on occasion; but the guests give the audience a peek into Bannon's extensive contacts list. Because of his career activities on Wall Street, in the military and in Hollywood, Bannon is one of the few individuals who can round up political luminaries at a moment's notice for a daily broadcast.

In a recent episode, a guest offered this advice to the president: "The White House and representatives of Congress have got to leak!" On a practical level, the media need scoops: "You've gotta feed the alligators."

And all agreed that the White House needs to get its legal scholars out there to give the President's position extra cache, extra credibility. For example, they recommended looking to The Federalist Society for the right people.

Bannon pointed out that Trump does not have a nickname for House Speaker Nancy Pelosi. The observation is funny/amusing, but it's not. Bannon is a fan of Pelosi in the sense that he sees her as one of the great House Speakers of all time. Her voice may be annoying; but because of Bannon, Trump supporters are warned to take her seriously.

Detractors want to point out that Bannon’s war room is outside the White House, but that’s how Bannon has often operated—outside official channels. When he and Andrew Breitbart launched Breitbart News and bought the Washington D.C. property, they called it Breitbart Embassy, not Breitbart headquarters because they saw themselves as leaders of a foreign power, as outsiders.

Bannon is such a colorful character that he doesn’t need to be inside the White House to make things happen. He can get the party to move to his house. And that’s what he’s done. Every day, at 9 a.m. and 5 p.m. EST, Stephen K. Bannon is in "full guerilla" mode, where he wears his brain on his sleeve for War Room: Impeachment.