At the end of February, the very private Dignitatis Humanae Institute (DHI) emerged like Punxsutawney Phil from his winter burrow and announced from its headquarters in Rome that it is now the leaseholder of the historic Abbey of Trisulti, a 13th-century Italian monastery and national monument since 1873. In late 2018, Cdl. Raymond Leo Burke was named the institute's honorary president, while former White House Chief Strategist for President Donald Trump, Stephen K. Bannon, now chairs the organization's board. All these changes in the last 12 months suggest the organization is ramping up for a new level of visibility.

When Buttiglione, a noted scholar and respected public figure in Italian politics, specifically was questioned about homosexuality and his views on the family, his orthodox Catholic responses raised concerns, even though he emphasized that those were his personal views and would not be the basis of any decisions he made in his official capacity as commissioner. Harnwell, based in Brussels, watched this incident play out from hiw front-row seat and identified it as a harbinger of secularism's growing dominance in Europe. He took action — and DHI was born, with Buttiglione as a founding patron.

Consistently described in the secular press as "far right," DHI appears to be funded by a small group of benefactors, one of whom is Bannon. Its board of advisors consists of 11 cardinals, several well known to conservative Catholics. Bannon chairs the entirely separate board of trustees. The institute's new honorary president, Cdl. Burke, follows Cdl. Renato Raffaele Martino's 16-year service to the organization.

Cardinal Martino, former papal nuncio to the United Nations, is one of three clerics Abp. Carlo Maria Viganò named as part of a "homosexual current in favor of subverting Catholic doctrine on homosexuality." The other two named were Cdls. Francesco Coccopalmerio and Edwin O'Brien. Harnwell made a public statement strongly in support of Cdl. Martino. It is not clear whether there is a causal relationship between the Sept. 2018 change in DHI's advisory board leadership and Abp. Viganò's accusation.

At DHI's 2013, by-invitation-only International Conference on Human Dignity, Cdl. Burke delivered the keynote address, where he repeated Lord Alton of Liverpool's statement that DHI is "one of the most important organizations promoting human dignity in the world today."

In 2014, Bannon was invited to be a DHI conference speaker. The conference focus that year was "Poverty and the Common Good: Putting the 'Preferential Option for the Poor' at the Service of Human Dignity." Bannon's presentation, titled "Should Christians Impose Limits on Wealth Creation," inspired the audience and has been called a "manifesto." In his remarks, among other things, Bannon urged Christians to unite and embrace their destiny as the Church Militant. In fact, Bannon's use of the term "Church Militant" led some to believe there is a direct relationship between Bannon and the St. Michael's Media/Church Militant apostolate — a claim denied by the Catholic media organization.

Bannon's work with DHI is not to be confused with his other project, The Movement. Based in Brussels, The Movement is a Euroskeptic, populist group dedicated to fighting globalism and promoting candidates who represent Western civilization's Judeo-Christian values.

Steve Bannon is the man the "opposition party media" loathes and loves. His opinions about the Mueller report were in great demand because he is witty, articulate, accessible, congenial and oh-so-quotable. It was Bannon who said Trump would go "full animal" now that the Mueller report is complete. He's the man who is predicting that the 2020 election cycle will be "the most vitriolic since the Civil War." He helped popularize the "Honey badger don’t care" meme. If you are a journalist looking for a good time, Steve Bannon is that dangerous date you are dying to get.

With the release of The Brink on March 29, Bannon is really under the microscope. Directed by Alison Klayman and produced by Maria Therese Guirgis, The Brink is a fly-on-the-wall-style documentary production. How did these two young women persuade Bannon to give them such access to his activities? The key contact was Guirgis, who reported to Bannon for three years. She credits him with giving her important responsibilities early in her career. Even though they had very different values, she says he always answered her emails when she wanted to vent about President Trump. She was the connector who persuaded him to let her do the film with Alison Klayman.

Steve Bannon is the man the 'opposition party media' loathes and loves.

With some of the media attention out of the way, Bannon can return to his work with DHI and The Movement. There does appear to be something of a convergence between the two projects. For example, DHI plans to use the abbey for its Academy for the Judeo-Christian West, a place where young people can be trained to govern from the vantage point of Western civilization's values. Scheduled to begin offering classes in 2020, the institute's ambitious plans seem unrealistic, given the massive, massive work it will require to bring the abbey into the 21st century, even with a fast infusion of cash.

While one secular media outlet described the abbey as a "compound," some might say the medieval monastic setting is ideal for DHI's stated purpose. But the realities of modern life and the need for plumbing — not to mention technology — are pressing.

Meanwhile, DHI should probably turn its attention to some of the more mundane tasks of running a think tank, like its website and its ability to accept charitable gifts. Right now, if people want to make a gift in support of the institute, they must make their checks out to Benjamin Harnwell and use the memo line to designate the funds for DHI. Yikes!

Kristine Christlieb Canavan’s work has appeared in the Fort Worth Star Telegram, Christianity Today and The Christian Standard. She has also done documentary film writing for Nebraska Public Television and has been an editor for Syracuse University Press. 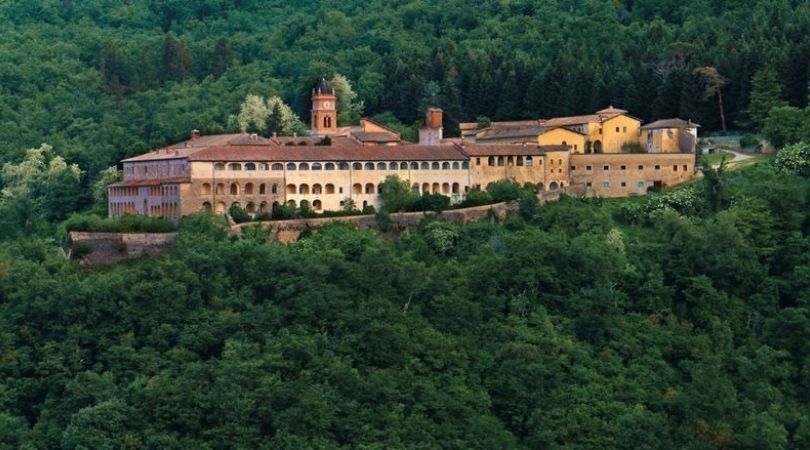