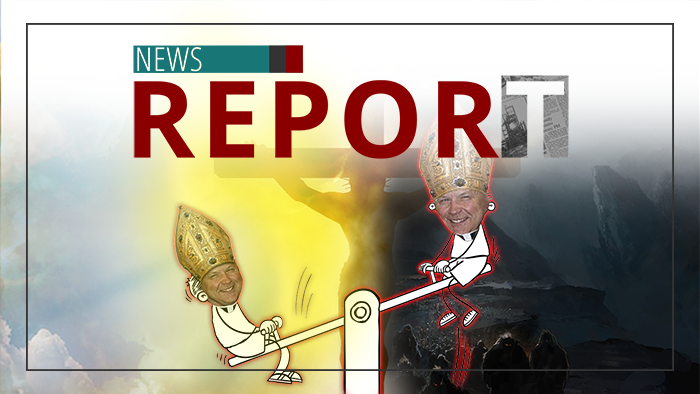 Tennessee bishop Richard Stika is a mysterious figure, sometimes orthodox, sometimes not so orthodox. He recently swapped out a board-appointed investigator in the diocese with his own guy in a case of alleged sex abuse, a move that triggered some complaints to the Vatican. Church Militant's William Mahoney explores growing tension between Stika and his priests.

Clergy in the Knoxville diocese are suspicious of the bishop who's likely facing a Vatican investigation primarily for alleged sex abuse cover-up.

On Saturday, The Pillar reported the bishop, Richard Stika, touts a successful diocese, while his presbyterate tells a different story.

Negative buzz among the ordained comes on the heels of roughly 10 complaints sent in April to the Holy See's Congregation for Bishops, citing cover-up on Stika's part in at least one case. That case involved a seminarian accused of sexually abusing other seminarians. The seminary dismissed the man, but Stika continued calling him a seminarian to avoid complications with his immigration status.

The Knoxville prelate was living with the seminarian in 2019, where he faced a prior accusation of assaulting an employee at the cathedral.

The allegations of cover-up are being reviewed under the terms of the pope's letter on handling sex abuse, Vos estis lux mundi.

While Stika denies cover-up, many are waiting for the Vatican to launch a formal investigation.

Of nearly a dozen priests interviewed, the negative buzz against the bishop included comments like:

Bishop Stika has long been a conundrum for Catholics, confusing everybody one day, then strongly defending the Faith the next.

For example, in May 2020, the prelate instructed his priests "not [to] give Communion on the tongue," even threatening non-compliant parishioners, "they will be asked to leave and not permitted to return."

But then, three months later, he tweeted, "Don't understand how Mr. Biden can claim to be a good and faithful Catholic as he denies so much of Church teaching"

In that thread, Stika also called out Kamala Harris for showing "time and time again in Senate hearings that she is an anti-Catholic bigot."

Bishop Stika currently lives with Cdl. Justin Rigali, for whom he began working in 1994 as the then-archbishop's secretary in the archdiocese of St. Louis, Missouri.

Rigali has his own history of cover-up, retiring as shepherd of Philly in 2011 while engulfed in sex abuse scandal.

Considering their history and current proximity, some in the Knoxville diocese are wondering just how much the cardinal is influencing the bishop.

After serving as Rigali's secretary in St. Louis, Stika continued to climb the ranks, becoming archdiocesan chancellor and eventually second in command as vicar general.

Argentine Bishop Reinstitutes Communion on the Tongue
By Church Militant   •   0