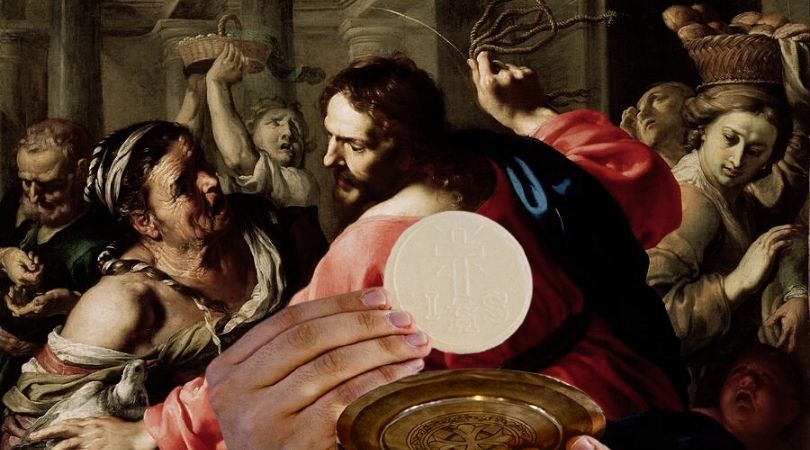 Cleansing the Temple of pro-aborts

Read parts I and II of this series.

Jesus warned the Apostles against the wiles of the Scribes and Pharisees, those who claimed to be teachers and who sat on the chair of Moses (a symbol of authority over the people, like the chairs of the bishops today) and misused that authority to impose their personal and legalistic ways on the people. They were hypocrites — saying one thing and doing another.

Ask the opinion of any modernist bishop or priest today. Was Jesus uncharitable, judgmental, divisive? Or was he perhaps too rigid in his treatment of the scribes and Pharisees?

Our Divine Master, the meek and humble of heart, addressed in clear terms the scribes and Pharisees of His time, those authoritarian individuals who can be likened to certain bishops and priests of today — those who participate in the sacrilege of giving Communion to pro-death politicians during the Holy Sacrifice of the Mass in the very temple of God, a desecration of the Sacred Species in the holy place!

What Would (or Did) Jesus Do?

Let's recall what Jesus did to those who desecrated God's Temple:

Jesus went into the Temple of God, and He made a whip out of cords and drove all from the Temple courts, both sheep and cattle. He poured out the coins of the money changers and overturned their tables and the chairs of them that sold doves. He cast out all them that sold and bought in the Temple, and He saith to them: It is written, My house shall be called the house of prayer; but you have made it a den of thieves (Matthew 21:13).

Again, was Jesus too rigid? If so, every faithful Catholic must like be like Him, unquestionably rigid against evil and hypocrisy in the Church. The disciples remembered the Scripture: "The zeal for thy house has eaten me up!" (John 2:17). Like the prophet Elias, who together with Moses, stood by Him on Mount Tabor on the day of the Transfiguration, he was "Zelus Zelatus sum, pro Domino Deo exercituum" — zealous with zeal for the Lord God of the Hosts!

Today's apostates deserve a sound beating by the Son of God, a beating originating from His holy anger.

Please think about it: What would Jesus say to the bishops and priests who partake in committing sacrilege in God's house? Would He say, "You have made the house of my Father a den of child-killers, sodomites and sacrilegious supporters of murder"?

Yes, friends, because the relentless series of sacrileges today is immensely worse than the money-changing in the Temple! To say the least, today's apostates deserve a sound beating by the Son of God, a beating originating from His holy anger. A sound beating would be an act of mercy to wake certain reprobates up, preparing them to receive divine grace.

Cdl. Raymond Burke warns clergy against giving Communion to those who persist in grave sin.

If it weren't so tragic that many of the infamous politicians who favor the killing of innocent babies are strongly opposed to the imposition of the death penalty on incorrigible criminals, the disparity would be legitimately comical. The innocent ones must die; the guilty ones must live, so the logic goes.

They say that abortion is not murder. But this is a lie, a diabolical lie. Both reason and reality show there is no truth in them. Unborn babies are as human as anyone already born. So, those people who say the preborn are not human — they are liars, pure and simple. They desire that murder be accepted by their ambiguous language.

Jesus says to them, "You belong to your father, the Devil, and you want to carry out your father's desires. He was a murderer from the beginning, not holding to the truth, for there is no truth in him. When he lies, he speaks his native language, for he is a liar and the father of lies" (John 8:44).

Let us pray that the bishops and priests who've fallen prey to the Devil's lies repent and mend their evil ways.

Let us pray that the bishops and priests who've fallen prey to the Devil's lies (and have become Hell's parrots for those same lies) repent and mend their evil ways, lest they perish in their grave sins, and take many souls with them.

But there is hope: Some bishops have realized the situation is insufferable and decided to act, even at the 11th hour, to start a eucharistic revival. One of them is His Excellency Andrew Cozzens, the auxiliary bishop of Saint Paul and Minneapolis and chair of the bishops' evangelization committee. He presented the "Plan of Fire" to his fellow bishops during their virtual spring meeting June 18. He explained the program aims to support and "start a fire" of devotion to the Eucharist with a particular focus on the local level — dioceses, parishes and families.

Excellent plan, Bp. Cozzens! Though you may risk being labeled "rigid" by some fellow bishops for your good plan of fire, you can count me in to work alongside you! From inception, my Sacred Heart Media has always been a fearless herald of the Real Presence and of eucharistic devotion as it defends faith, life and family. No one can wait until mid-2022 to start promoting what should have been promoted decades ago.

It is necessary to increase and multiply efforts to help revive belief in the Real Presence among Catholics in America and to refute and repudiate bishops and priests who partake in the sacrilege and desecration of the Blessed Sacrament, lest they perish in their sin.

Friends, way too many souls are in danger: 70% of Catholics no longer believe in the great gift of the Eucharist. We must act now, while there is still time before the remaining 30% who still believe are reduced even more drastically.

We want to remain part of the solution, not the problem.

America is the richest country in the world in producing lay Catholic apologists who are faithful to the teaching of the Church and defend the faith everywhere. So, I call on all of you, lay Catholic apologists, to join me and all good bishops, priests and others in promoting this revival of eucharistic belief and devotion, and refuting error and heresy about it everywhere.

For many years I have personally been helping Catholic communities to strengthen their knowledge of the Faith at several levels. And this is my contribution to the Plan of Fire:

I volunteer to assist — free of charge — any parish, association, diocese, school, etc., in North America to address conferences in defense of the Real Presence of Jesus in the Eucharist, from the points of view of logic, Sacred Scripture and the early Church Fathers.

No speaker’s fees are required. Just see to transport and accommodation, and I am your man to help you inform and form your community on the Real Presence of Jesus in the Holy Eucharist. I pray many other lay apologists will do likewise.

Raymond de Souza is Brazilian by birth, Catholic by grace and American by choice. He is a knight of the Equestrian Order of the Holy Sepulcher of Jerusalem, a dnight of the Sovereign and Military Order of Malta, and a fourth degree Knight of Columbus. Raymond puts logic at the service of the Faith to "re-evangelize the baptized" (John Paul II), blending it with wit, Scripture and history in a unique and riveting style. He has given in person, on radio and television over 2,500 talks on apologetics and pro-life issues. He has also assisted religious education programs in dioceses, parishes, schools and lay organizations in 38 countries of the six continents in four languages (English, Spanish, French and Portuguese, plus some Italian and Afrikaans). He writes weekly articles for the oldest national Catholic newspaper, The Wanderer. He is the delegate for International Missions for Human Life International, the largest Catholic pro-life and pro-family association in the world, having affiliates in over 100 countries.
--- Campaign 31877 ---