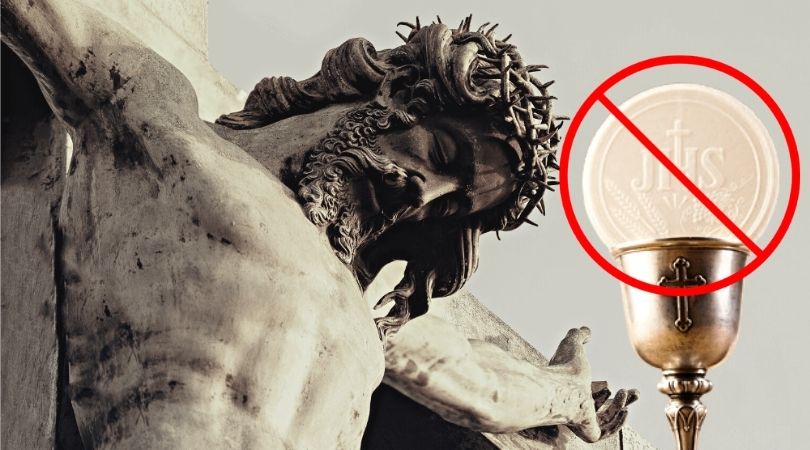 Read parts I, II, III, and IV of this series.

Can any one of you help me to clarify a simple thing: Which part of the word "murder" and the word "sacrilege" don't the evil politicians, bishops and priests understand?

I, for one, believe and affirm complicit clergy are all wolves in sheep's clothing, or rather, wolves in shepherd's clothing, teaching ideas contrary to the gospel of Jesus Christ. They are apostates from the Catholic faith, calling evil good, and good evil — trying to change what we have learned from the beginning. Saint Paul gives them the anathema!

Such apostates are rather flexible when it comes to accepting every kind of moral and theological error but very rigid with regard to faithful Catholics who oppose their apostasy. They label us "traditionalists," "divisive," "rigid" — as we know.

Saint Thomas More believed that to be united with evil people "for the sake of fellowship" was not a good idea. It serves no good purpose at all to be united with the bishops or priests or politicians in error if we all land together in Hell.

Pope Benedict XVI told the faithful in 2007 that struggling for the truth can result in division: The peace that Jesus brings is the fruit of a constant struggle against evil.

Quoting Jesus, he challenged the faithful, "Do you think that I have come to give peace on earth? No, I tell you, but rather division" (Luke 12:51).

Christ's words mean that the peace he came to bring us is not synonymous with the mere absence of conflicts. On the contrary, Jesus' peace is the result of a constant battle against evil. The fight that Jesus is determined to support is not against human beings or human powers, but against Satan, the enemy of God and man.

Anyone who desires to resist this enemy by remaining faithful to God and to good, must necessarily confront misunderstandings and sometimes real persecutions.

Anyone who wishes to follow Christ and commit himself to the cause of truth without compromise, he adds, "must know that they will encounter opposition" and become "a sign of division between people, even in their own families."

Benedict also pointed to the Virgin Mary, the Queen of Peace shared in her Son's fight against the Devil. He urges us to invoke her motherly intercession so "she may help us always to be witnesses of Christ's peace" without ever stooping "so low as to make compromises with evil."

Are you listening, fake Catholic politicians, liberal bishops and priests who compromise with the evils of sacrilege and baby killing?

Friends, let us pray for their conversion, that they may change their ways and do penance for the grave injuries they've inflicted on the unborn children of God and the Body of Christ, lest they perish in their sin.

The Right to Speak, Be Persecuted

When you argue in defense of the truth and the Church based upon logic, Scripture and Church teaching, the modernists will try to denigrate you by calling you a traditional Christian, a conservative and, of course, rigid and divisive. They attack you as a person in order to avoid answering your arguments. This is a fallacious tactic called an ad hominem attack, and it's the calling card of those small minds who have no use for logic. So they attempt to denigrate you as a person. They do not know the proper meaning of the word charity.

Let me make it clear: If you, as a Catholic faithful to the Magisterium of the Church, decide to stand up and speak up in defense of the Faith, as I am doing now, there will be modernist clergy who will, no doubt about it, strike you with insults, call you uncharitable, judgmental or even rigid and divisive. For them, the layman has to obey, pay, have no say and be kept at bay. But the Catholic Church is not a dictatorship of the fascist kind, which imposes the whims of the clergy on the laity, as if those whims had any power to silence you.

But no — the Code of Canon law (especially canon 212) gives to us, the laity, the right to speak up and share our views, as I am doing now. Surely the dictator bishops and priests will try to silence us. Either they are ignorant of canon law or know it and do not teach the people their rights. Perhaps, in the seminary, they heard of canon law as a segment of the army — the artillery — and being pacifists, they did not want to study it. In any event, when they call you divisive or rigid, these are simple ad hominem insults from people who have no argument to justify their apostasy.

To this, we can reply as Our Lord Jesus Christ did who, when a pagan soldier struck him in the face at the house of Caiaphas, wondered, "If I said something wrong, testify as to what is wrong. But if I spoke the truth, why did you strike me?" (John 18:23).

When we suffer persecution in the Church for being faithful to Christ, let us rejoice! The eighth beatitude is for us: "Blessed are you when they shall revile you, and persecute you, and speak all that is evil against you, untruly, for my sake. Be glad and rejoice, for your reward is very great in Heaven. For so they persecuted the prophets that were before you" (Matthew 5:11–12).

When we suffer persecution in the Church for being faithful to Christ, let us rejoice!

Alongside the call to start a revival of knowledge of and devotion to the Blessed Sacrament, let us add something else. Many of us offer holy hours of adoration in reparation for the crimes of abortion, and this is very good. But let us add holy hours of reparation for the sacrileges committed by the bishops and priests who give Holy Communion to politicians who support the murder of the innocents. And let us vote the politicians out in the next election, as they are not only useless but also counterproductive for the nation.

A song of praise to the eucharistic Jesus touched me profoundly many years ago and continues to do so to this day. It bespeaks a sacred love to Our Redeemer, a filial intimacy that leads us to come closer to Him; to be part of the Holy Family with Mary, His mother and ours; that manifests His Sacred Heart filled with love for mankind and invites us to return love for love. It is a filial act of thanksgiving for the divine gift of His Real Presence in the blessed Eucharist, to stay with us as He promised not to leave us orphans. Most of you know it. It goes like this:

Jesus, my Lord, my God, my all ... how can I love Thee as I ought? And how can I revere this wondrous gift, so far surpassing hope of thought.

Had I but Mary's sinless heart, to love thee with, my dearest King, O with what bursts of fervent praise, Thy goodness, Jesus, would I sing!

Sweet Sacrament, we Thee adore, or make us love Thee more and more.

Raymond de Souza is Brazilian by birth, Catholic by grace and American by choice. He is a knight of the Equestrian Order of the Holy Sepulcher of Jerusalem, a knight of the Sovereign and Military Order of Malta, and a fourth degree Knight of Columbus. Raymond puts logic at the service of the Faith to "re-evangelize the baptized" (John Paul II), blending it with wit, Scripture and history in a unique and riveting style. He has given in person, on radio and on television over 2,500 talks on apologetics and pro-life issues. He has also assisted religious education programs in dioceses, parishes, schools and lay organizations in 38 countries of the six continents in four languages (English, Spanish, French and Portuguese, plus some Italian and Afrikaans). He writes weekly articles for the oldest national Catholic paper, The Wanderer. He is the delegate for International Missions for Human Life International, the largest Catholic pro-life and pro-family association in the world, having affiliates in over 100 countries.
--- Campaign 32075 ---