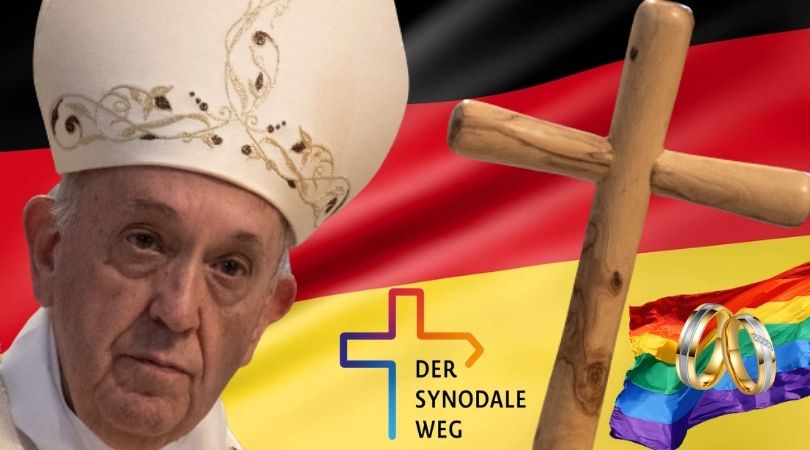 Catholics beg pontiff to step in

VATICAN (ChurchMilitant.com) - Catholics at all levels of the hierarchy are petitioning Pope Francis to save the German Catholic Church from schism.

A cardinal, 2 bishops, 12 priests and over 50 laymen signed an appeal on Wednesday — pleading with the pope to intervene to end the German Catholic Church's string of so-called pastoral conferences (which are known as the Synodal Way):

The German Synodal Way, initiated in 2019, has been, during the past two years, fertile ground for the planning and subsequent homogenization of ideas and theories that are blatantly contrary to the immutable and perennial Magisterium of the Holy Catholic Church, founded by the Divine Savior on the solid rock of the Apostles.

Concerned about this sad situation, we Pastors of the Catholic Church and faithful laity committed to the defense of the Truth of the Faith, ask the Holy Father to take the necessary measures to put an end to these drifts of the German Synodal Path and, if necessary, to apply the appropriate canonical sanctions against the promoters of this tremendous deviation from both doctrine and communion with the Keys of Peter.

Among these "tremendous deviations from doctrine," they mention promoting the LGBT agenda, objecting to clerical celibacy and pushing the ordination of women.

On the issue of homosexuality, the signers invoked the explicit teachings of the Catechism of the Catholic Church, which says the "matrimonial covenant, by which a man and a woman establish between themselves a partnership of the whole of life, is by its nature ordered toward the good of the spouses and the procreation and education of offspring."

This issue in particular was highlighted because over 500 members of the German clergy, including several bishops, plan to defy the Congregation for the Doctrine of the Faith (CDF) and bless homosexual couples on May 10 — publicly disobeying the CDF's March 15 ban on blessing them.

Now, the head of the German bishops conference president rejects the idea that the Synodal Way is leading to schism. Bishop Georg Bätzing claims Catholics in Germany pushing a left-wing agenda are not "schismatics," and denied they are seeking to "detach ourselves as the German national Church from Rome."

Despite what the Catechism states, the pontiff is unlikely to step in.

Though petitioners shied away from saying the German bishops' acts are, in fact, schismatic, they did suggest it.

"According to the Code of Canon Law, schism is defined as 'the refusal of submission to the Supreme Pontiff or of communion with the members of the Church subject to him' (c. 751) thus incurring excommunication latae sententiae on all those who promote it," they reiterated. "All this makes one think that the German Synodal Way is daily tending to become a step towards declared schism and heresy."

Despite what the Catechism states, the pontiff is unlikely to step in. His past comments and comments credited to him appear to indicate he isn't fully on the side of the Congregation for the Doctrine of the Faith.

Back in April, Juan Carlos Cruz, a gay journalist and sex abuse victim, said, "I spoke with the pope, I don't want to betray a confidence, but I know that the pope is a man who is very hurt by this, although ultimately he is responsible."

Pope Francis also allegedly backed homosexual civil unions in October, claiming, "What we have to have is a civil union law, that way they are legally covered."

Much like the German bishops, his comments also defy a CDF declaration, one from 2003 making clear that "respect for homosexual persons cannot lead in any way to approval of homosexual behavior or to legal recognition of homosexual unions."

No matter the Pope's current position, this coming Monday, he will be faced with a decision that will alter the direction of the Catholic Church for decades to come — as German clergy give "blessings" to same-sex couples.

If the Holy Father refuses to act, it could show the Church will do nothing when faced with obstinate heresy — and if he chooses to take action, he risks full-blown schism in Germany.