Study: As Number of Catholics Goes Up, Number of Priests Going Down

The Center for Applied Research in the Apostolate (CARA) at Georgetown, which specializes in social scientific studies on the Catholic Church, released a report yesterday titled "Global Catholicism: Trends & Forecasts." Its results look positive at first: The global Catholic population is rising. Overall, the number of Catholics worldwide rose 57 percent between 1980 and 2012 — 2012 being the most recent date for reliable numbers. Thirty five years ago, there were just more than 780 million Catholics in the world; three years ago, there were almost 1.23 billion. 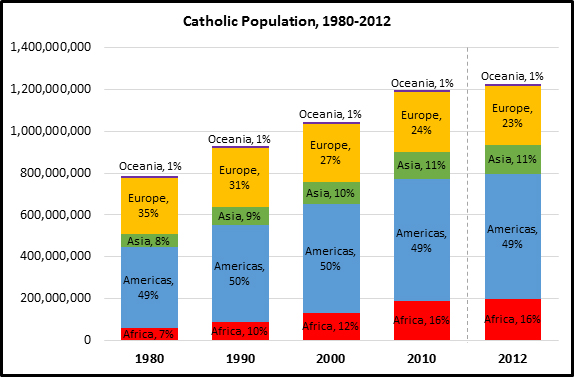 The study divides the world's population into five regions: Africa, the Americas, Asia, Europe and Oceania (Australia and proximate islands). The most growth is coming from Africa, where the Catholic population has risen by 238 percent, from slightly fewer than 60 million in 1980 to about 200 million in 2012. Europe's Catholic population, perhaps surprisingly, is still increasing, but at a drastically slower pace than anywhere else in the world. The number of European Catholics has only risen by 6 percent, from slightly more than 271 million in 1980 to around 290 million in 2012. The difference, according to the study, mostly reflects the areas' different fertility rates. 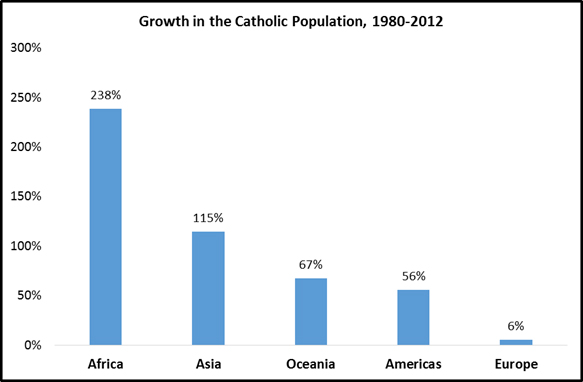 CARA includes future projections based on its findings as well: The estimated Catholic population in 2050 will be 1.64 billion — a projected 29 percent overall increase. 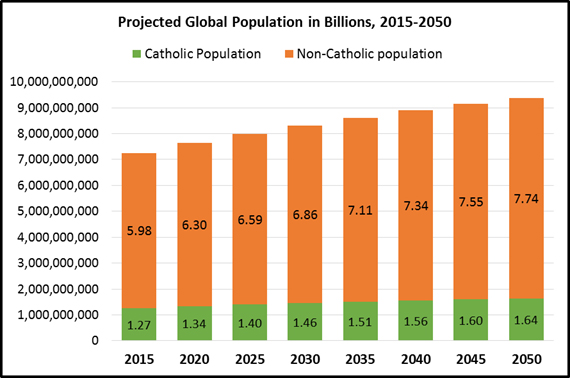 When it comes to Catholic parishes, however, not all regions have higher numbers. While there's big growth in the number of parishes in Africa and Asia, the Americas' parish growth is less than half its population growth, Oceania's is very slight, and Europe's parish number has dropped by 12 percent. 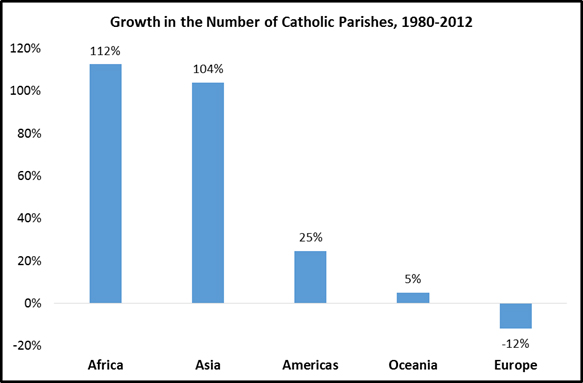 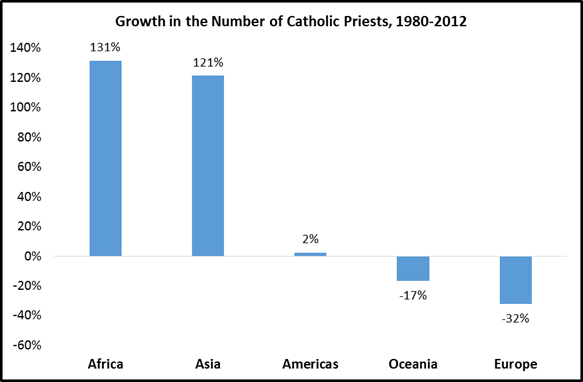 In the Americas, the increase of priests is almost negligible: It only went up by 2 percent, or about 2,000, within 32 years. That's well behind its 56 percent increase in overall Catholic population. Oceania's number of priests sunk by 17 percent, but that was only about half the drop Europe suffered. There were almost 245,000 priests in Europe 35 years ago; now, there are barely more than 165,000 — that marks a loss of almost 80,000 priests since 1980 in Europe, a 32 percent loss.