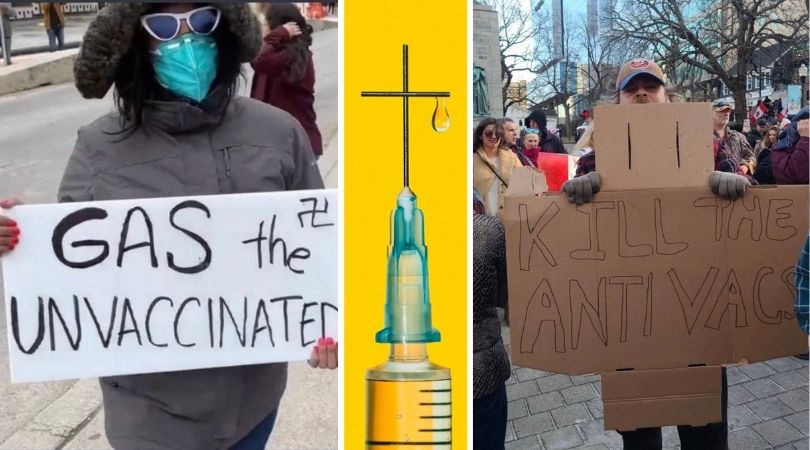 AARHUS, Denmark (ChurchMilitant.com) - A groundbreaking study has found that vaccinated people exhibit high levels of prejudice and hatred towards the unvaccinated.

In contrast, researchers at Aarhus University in Denmark who studied the responses of 10,740 respondents in 21 countries found no evidence that unvaccinated people display antipathy towards vaccinated people.

"The results demonstrate that this antipathy is completely one-sided — exclusively being directed by the vaccinated towards the unvaccinated, while the average unvaccinated person harbors no antipathy towards vaccinated individuals," the authors reveal.

The political scientists who conducted the research note that the antipathy of the jabbed towards the ununjabbed is so high that it is 2.5 times greater than the hatred directed at Middle East migrants — a group facing high levels of global discrimination.

Titled "Prejudice Against the Vaccinated and the Unvaccinated During the COVID-19 Pandemic: A Global Conjoint Experiment," the study, published Friday, warns that the antipathy towards the unvaccinated may exacerbate initial vaccine hesitancy and "further entrench the conflict."

"The novel socio-political cleavage we document may thus be an indication that societies worldwide will leave the pandemic more divided than they entered it," the scientists note, as the unvaccinated in some countries have even been excluded from family relationships.

The antipathy is one-sided, exclusively directed by the vaccinated towards the unvaccinated.

The antipathy towards the unvaccinated resembles the stigma attached to other deviant groups — such as promiscuous females, atheists, substance abusers and the mentally ill, the researchers discovered.

Academics are also observing how the exclusionary rhetoric of religious leaders has contributed significantly to the "othering," stigmatization and vilification of the unvaccinated.

A supporter of U.S. Democrat congresswoman Alexandria Ocasio-Cortez calls for "gassing the unvaxxed"

Italian ethicist Fulvio Di Blasi explained to Church Militant that by "supporting the demagogic slogan that getting vaccinated is an act of love," religious leaders have created a new moral category, "instantly transforming those who do not get vaccinated as selfish people and criminals to be condemned."

Dr. Di Blasi, whose forthcoming book is titled Vaccination as an Act of Love? Epistemology of Ethical Choice in Times of Pandemics, elaborated:

The hatred of the unvaccinated is based, above all, on the erroneous assumptions that these new vaccines are the only salvation against an unspeakable pandemic danger and that the unvaccinated is an egoist unwilling to do his part to defeat it. Unfortunately, many religious leaders have fueled both errors by meddling in scientific issues not within their competence, fueling fear in the virus even at the expense of faith in God.

Jewish anthropologist Karen Harradine said she found it "particularly shocking for Jewish rabbis to tell Jews it is their 'moral duty' to get jabbed," especially because such rabbis were violating the Nuremberg Code's prohibition of medical coercion, set up in the wake of the Holocaust.

Even in the College of Cardinals there are some deniers.

"Many religious people are unthinkingly obedient to clergy, thinking they are endowed with 'special' spiritual insight. So when religious leaders equate 'unvaccinated' with 'immoral,' it is not surprising their followers develop antipathy towards the unjabbed," Harradine told Church Militant.

"The ecclesiastical establishment has undoubtedly contributed to the vilifying of people who refuse the series of injections — such as Pope Francis calling them 'selfish' and the archbishop of Canterbury labeling the unvaccinated 'immoral,'" medical ethicist Dr. Niall McCrae agreed.

McCrae explained how bishops have "fostered hostility to the unvaccinated by imposing a medical apartheid and, in several instances, excluding the unvaccinated from Holy Mass and the sacraments — even sacking unvaccinated clergy and dismissing unjabbed seminarians."

Rabbi Avraham Steinberg, a member of the Pontifical Academy for Life, compared unvaccinated people to murderers or "rodef" — a pursuer with an intent to kill. "Vaccine refusers" should be judged in a "criminal" light and "in the sphere of damages/torts," he argued.

The rabbi, who was invited to a Vatican health conference in September, said it is "an obligation of the government," to punish vaccine refusers and bar them from entering public places, synagogues and schools.

"Cain, feeling inferior in relation to his younger brother, closes himself off and lets himself be invaded by hatred against his brother"; therefore, he "becomes inhuman — his identity turns to violence and despotism," Bingemer told the Vatican health forum.

Quoting Pope Francis' description of the unvaccinated as "victims of their own imagination," Borg vilified unjabbed individuals as those who "not only disdain the common good, but ... also disparage the truth."

Francis has insisted vaccination is a "moral obligation" and disparaged unvaccinated people as "suicidal" and as those swayed by "baseless information or poorly documented facts."

"Even in the College of Cardinals there are some deniers," Francis said in September, en route home from Slovakia.

Jews for Justice warned Anglican archbishop of Canterbury, Justin Welby, not to scapegoat the unvaccinated.

"The current 'othering' of the unvaccinated precisely reflects the 'othering' of Jews in 1930s Germany," Andrew Barr, secretary of the campaign group, wrote.

Moralizing by religious leaders and others was initially thought to be effective in increasing vaccine uptake, but the present research demonstrates the strategy has a negative impact, the Aarhus scientists emphasized.

"In the short run, prejudice towards the unvaccinated may complicate pandemic management. In the long run, it may mean that societies leave the pandemic more divided than they entered it," the researchers conclude.