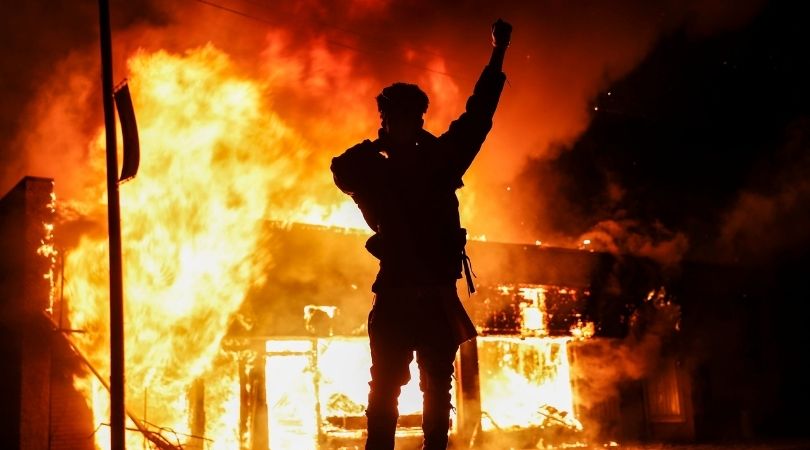 DETROIT (ChurchMilitant.com) - Despite establishment media claiming this summer's protests have been all peaceful, a new study shows 95% of the riots are tied to Black Lives Matter.

This came from a study conducted by the Armed Conflict Location and Event Data Project (ACLED), a nonprofit data collection, analysis and crisis-mapping organization. The data collected by ACLED ws reported by The Federalist on Wednesday, and showed nearly 6% of protests in the United States in the three month period covering June, July and August, have involved violence to people and property. It has resulted in 47 fatalities.

The report and accompanying data project, however, which was supported by liberal Princeton University, reads like an attempt to blame police for this summer's death and destruction:

Although federal authorities were purportedly deployed to keep the peace, the move appears to have re-escalated tensions. Prior to the deployment, over 83% of demonstrations in Oregon were nonviolent. Post-deployment, the percentage of violent demonstrations has risen from under 17% to over 42%, suggesting that the federal response has only aggravated unrest.

Joy Pullman, writer for The Federalist, believes the report takes unfair shots at the police while purposely ignoring reason and the facts.

Pullman also noted that the report, even while documenting the chaos, seems to understate the violence and blame the police.

The cause of violence is the people who have chosen to be violent.

The vast majority of demonstration events associated with the BLM movement are nonviolent. In more than 93% of all demonstrations connected to the movement, demonstrators have not engaged in violence or destructive activity. Peaceful protests are reported in over 2,400 distinct locations around the country. Violent demonstrations, meanwhile, have been limited to fewer than 220 locations.

The facts, however, don't seem to fit the narrative, claims Pullman. "Of the 12,045 incidents" ACLED recorded in summer 2020 protests, nearly 10% involved violence to people and property. Of these violent incidents, 84% involved BLM. It was involved in 95% of the riots for which there is information about the perpetrators' affiliation.

Despite BLM activists' violent record and BLM's explicitly stated war against the family, the world of sports has publicly embraced the movement, as have many corporations and Democrat politicians.

The Democratic Party platform reflects many of the demands advanced by the Black Lives Matter movement. This prompted a Trump campaign spokesperson to say in a statement that Biden is "now under the control of extreme elements of his party who support communism, disavow the family structure and demand the defunding and dismantling of our police departments."

Biden is 'now under the control of extreme elements of his party who support communism, disavow the family structure and demand the defunding and dismantling of our police departments.'

Vice-presidential hopeful Kamala Harris, in an interview with ABC News, said she gives full credit to the Black Lives Matter movement for shifting attitudes on policing. "It is time for that kind of change and enough is enough," Harris said.

Many believe it was Black Lives Matter that influenced Joe Biden in choosing a black running mate. David Axelrod, a Democratic pundit from CNN who worked for the Obama administration, attests to the fact that Harris was not Biden's first choice for a running mate yet chose her due to pressure.

The 2020 Democratic National Convention aligned itself with the Black Lives Matter movement without dissent. Former first lady Michelle Obama, whose closing speech was a highlight of the convention, took aim at Donald Trump: "Stating the simple fact that a black life matters is still met by derision from the nation's highest office."

Stephen Stills and Billy Porter performed a concluding song as Black Lives Matter signs and protesters flashed by in the background.

In a national poll completed Sept. 14 by Civiqs.com, 88% of Democrats support Black Lives Matter while 6% of Republicans do.