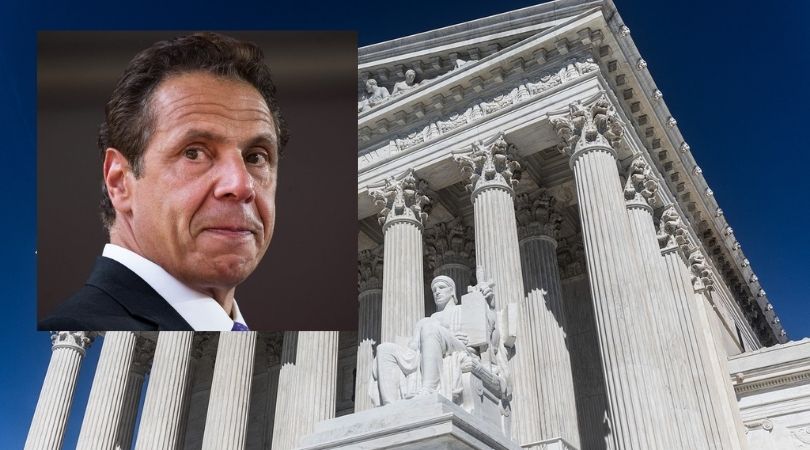 WASHINGTON (ChurchMilitant.com) - In a victory for religious freedom, the U.S. Supreme Court has handed down an order temporarily blocking New York's lockdown restrictions on houses of worship.

The diocese of Brooklyn and several Orthodox Jewish synagogues sued Cuomo, arguing that the lockdown restrictions made it "impossible" for them to "exercise their religious faith." Cuomo's Oct. 6 "Cluster Initiative" limited in-person worship to only 10 or 25 people, depending on the level of infection in the area.

The guidelines particularly angered the Orthodox Jewish community, which held protests in the streets, with one of their most prominent rabbis even characterizing Cuomo's actions as "a soft pogrom" against Jews.

In its Nov. 25 opinion, the Supreme Court highlighted the targeting of religious communities and the double standard:

Both the Diocese and Agudath Israel maintain that the regulations treat houses of worship much more harshly than comparable secular facilities. ... In a red zone, while a synagogue or church may not admit more than 10 persons, businesses categorized as "essential" may admit as many people as they wish.

The Court noted that "essential" businesses include campgrounds, car garages and acupuncture services, and even businesses not considered essential, e.g., chemical manufacturing plants and transportation facilities.

But even in a pandemic, the Constitution cannot be put away and forgotten.

The heart of the opinion is contained in the following lines:

Members of this Court are not public health experts, and we should respect the judgment of those with special expertise and responsibility in this area. But even in a pandemic, the Constitution cannot be put away and forgotten. The restrictions at issue here, by effectively barring many from attending religious services, strike at the very heart of the First Amendment's guarantee of religious liberty.

The Court split 5–4, with Justice Amy Coney Barrett joining the other four reliably conservative justices: Clarence Thomas, Samuel Alito, Neil Gorsuch and Brett Kavanaugh. It is her first vote in a significant case since being confirmed on Oct. 26.

Chief Justice John Roberts, a Catholic and the unpredictable swing vote, sided with the liberal bloc. Admitting that the restrictions limiting worship to 10 or 25 people "do seem unduly restrictive," Roberts argued that the issue is now moot, as Cuomo has already relaxed the guidelines to allow a maximum capacity of 50%.

The liberal justices who dissented — Stephen Breyer, Elena Kagan and Sonia Sotomayor — also admitted that the numbers of people allowed to worship are "indeed low," but insufficient to determine whether they violate the Constitution.

"But whether, in present circumstances, those low numbers violate the Constitution’s Free Exercise Clause is far from clear," Breyer wrote.

The Supreme Court order is temporary, pending the lawsuits' appeals before the Court. If the Court decides not to take the cases, the order will terminate immediately. It is more likely, however, that the High Court will accept the cases, and legal analysts predict the final ruling will be the same — 5–4 in favor of protecting religious liberty.