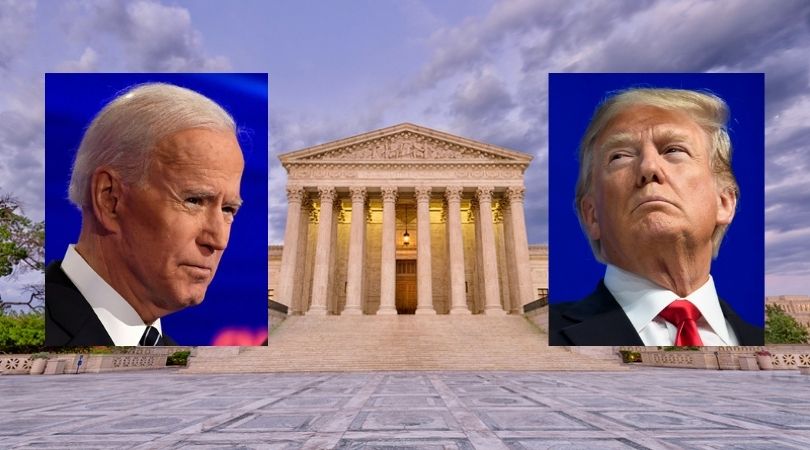 It may all hinge on High Court ruling on Pennsylvania

As the nation awaits ballot totals from several key states, it appears this entire election may hinge on the U.S. Supreme Court, specifically with regard to Pennsylvania.

If trends continue in Arizona, which is returning votes at a rate of 58% for Trump — a rate sufficient to overturn Biden's lead — then Trump may actually win the state. That, combined with North Carolina, Georgia and Alaska, which still have Trump in the lead, would be enough to get him to 259 electoral votes, while bringing Biden down to 253 electoral votes.

Pennsylvania, with its 20 electoral college votes, would be the deciding factor for either candidate.

When the Supreme Court rejected the Pennsylvania GOP's first challenge on Oct. 19, the justices were deadlocked 4–4, with Chief Justice John Roberts joining the liberal bloc to reject the petition. Justices Clarence Thomas, Samuel Alito, Neil Gorsuch and Brett Kavanaugh would have granted the petition.

While the order did not come with an accompanying opinion, several justices have since given insight into their reasoning in later statements, discussed further down in this article.

The Pennsylvania GOP took another swing at the bat, submitting a second emergency petition to the High Court to reconsider the mail-in ballot extension. On Oct. 28, while the High Court rejected a request to expedite the petition, it did not reject the petition itself.

This is why Justice Alito issued a statement in Republican Party of Pennsylvania v. Bookvar requesting that Pennsylvania segregate all ballots received after 8 p.m. ET on Election Day, in the eventual case the Court hears the case and strikes down the ballot extension, leading to those votes being thrown out.

Thus the petition remains before the Supreme Court, which is signaling it will indeed hear the case, after ordering the Pennsylvania Democratic Party to answer Trump's petition to intervene in the case.

Alito's Oct. 28 statement was joined by Gorsuch and Thomas, who would have accepted the petition to expedite. They made clear how they would vote were the case to come before them:

It would be highly desirable to issue a ruling on the constitutionality of the State Supreme Court's decision before the election. That question has national importance, and there is a strong likelihood that the State Supreme Court decision violates the Federal Constitution. The provisions of the Federal Constitution conferring on state legislatures, not state courts, the authority to make rules governing federal elections would be meaningless if a state court could override the rules adopted by the legislature simply by claiming that a state constitutional provision gave the courts the authority to make whatever rules it thought appropriate for the conduct of a fair election. (emphasis added)

And while Kavanaugh remained silent on Bookvar, he did indicate his own thinking on the Pennsylvania petition in an important footnote in Democratic National Committee v. Wisconsin, a 5–3 case that struck down a federal court's ruling to extend the deadline for mail-in ballots in Wisconsin.

Before understanding Kavanaugh's footnote, one has to look at Chief Justice Roberts' explanation for why he voted to strike down the extension in Wisconsin while refusing to hear the Pennsylvania case: It hinges on the difference between intrusion by a federal court vs. a state court:

While the Pennsylvania applications implicated the authority of state courts to apply their own constitutions to election regulations, this case involves federal intrusion on state lawmaking processes. Different bodies of law and different precedents govern these two situations and require, in these particular circumstances, that we allow the modification of election rules in Pennsylvania but not Wisconsin.

Kavanaugh's footnote responds to this reasoning: "[U]nder the U.S. Constitution, the state courts do not have a blank check to rewrite state election laws for federal elections."

State courts do not have a blank check to rewrite state election laws for federal elections.

Quoting Bush v. Gore, Kavanaugh added, "The text of Article II means that 'the clearly expressed intent of the legislature must prevail' and that a state court may not depart from the state election code enacted by the legislature."

This clearly indicates the way Kavanaugh would vote were the High Court to accept the Pennsylvania GOP's petition.

And with Justice Amy Coney Barrett now on the bench, whose jurisprudence more closely matches that of Kavanaugh and Gorsuch than Roberts, it is highly likely the outcome of that eventual ruling would be 5–4 in favor of striking down the three-day mail-in ballot extension in Pennsylvania.

Thus, even if Pennsylvania is declared for Biden this weekend, there is the very real possibility that that declaration would be abrogated by the Supreme Court weeks from now after it rules on Bookvar, forcing the invalidation of all post-Election Day mail-in ballots in Biden's favor and restoring the count to its original figures favoring Trump — a potentiality that is appearing more and more likely.