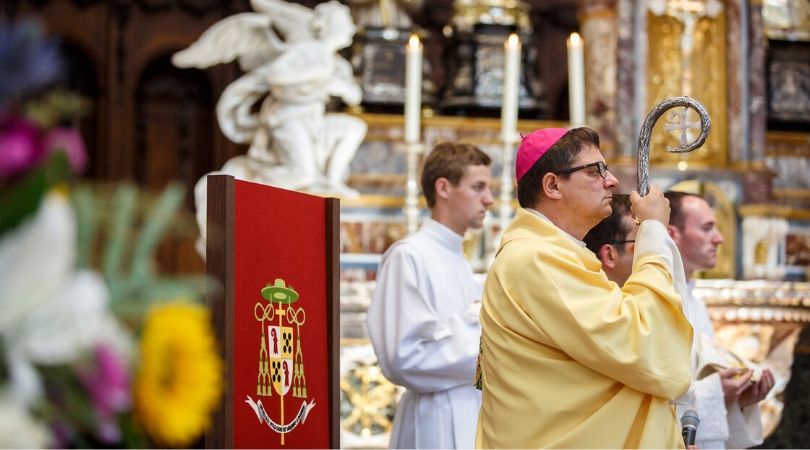 Lay-run parishes on the rise in Basel

BASEL, Switzerland (ChurchMilitant.com) - As the number of priests and seminarians continues to drop, the diocese of Basel, Switzerland is turning to lay Catholics to help run parishes and even baptize children.

The bishop of Basel, Felix Gmür, has permitted more lay men and women to confer the sacrament of baptism in all parishes in his diocese. Since July, pastoral assistants and lay ministers (called Gemeindeseelsorger) could seek permission from the bishop to perform baptisms, even if they're not running a parish in place of a priest.

In November, Bp. Gmür granted to female theologians the authority to baptize, according to Melanie Ploch in an article for katholisch.de, a Catholic news website connected to the German Bishops' Conference as well as the German dioceses.

In November, Bp. Gmür granted to female theologians the authority to baptize.

Bishop Gmür is not the first bishop to allow lay baptisms in a Western European diocese. His predecessor, Kurt Koch, had already done so, but only if the laity in question were running the parish. Bishop Koch was appointed by Pope Benedict XVI to be the president of the Pontifical Council for Promoting Christian Unity in 2010. He was made a cardinal later that year.

While even non-Catholics can validly baptize, this is only allowed by canon law in emergency situations. Canon 861 §2 states:

When an ordinary minister is absent or impeded, a catechist or another person designated for this function by the local ordinary, or in a case of necessity any person with the right intention, confers baptism licitly. Pastors of souls, especially the pastor of a parish, are to be concerned that the Christian faithful are taught the correct way to baptize.

The same canon is used by the diocese of Basel to justify allowing laity regularly to confer baptism. The bishop of Basel connects that piece of canon law with canon 517 §2, which states:

If, because of a lack of priests, the diocesan bishop has decided that participation in the exercise of the pastoral care of a parish is to be entrusted to a deacon, to another person who is not a priest, or to a community of persons, he is to appoint some priest who, provided with the powers and faculties of a pastor, is to direct the pastoral care.

Thus, a lay person may run a parish, or, as canon law puts it, may participate "in the exercise of the pastoral care of a parish." The Swiss diocese construes this as granting authority for the laity to baptize.

This would indicate that the number of priests has fallen by 62% since 1950, with every priest baptizing fewer than 18 people every year. It may be that some priests are no longer able to exercise their ministry due to old age or sickness. But even if only 150 priests were able to baptize, that would still amount to just under 44 baptisms per priest. Just doing the math casts doubt on the argument put forward by the diocese of Basel, which claims the lack of priests necessitates lay people doing baptisms.

Another cached version of official statistics shows that in 2016, there were only 64 seminarians all across Switzerland. Fourteen of those were preparing for the priesthood in the diocese of Basel. But from 1975–1990, there were still around 180 seminarians in all of Switzerland. Contrast this with the years just before the end of the Second Vatican Council, when Switzerland had more than 300 seminarians.

The dramatic drop in vocations brought with it an equally dramatic drop in the number of newly ordained priests. While there are no pre-Vatican II statistics on this, there were still around 20 ordinations per year in the 1990s in all Swiss dioceses combined. That number has sunk to an average of just seven ordinations in the years 2015 and 2016.

Today, there are only 1.7 ordinations each year for every 10 priests who have died, which means the total number of priests is decreasing at an alarming rate.

The diocese of Basel is considered one of the most liberal in Western Europe. As Church Militant reported in September, "The diocese of Basel, Switzerland, has expressed approval for political efforts to legalize so-called same-sex 'marriages' in the country for the good of children being raised by homosexual partners."

Bishop Gmür, according to Swiss broadcasting company SRF, said in February that power structures, as well as the position of women within the Church, need to change. The bishop has also said priestly celibacy should be re-evaluated.