VATICAN CITY (ChurchMilitant.com) - A soldier who quit the Pontifical Swiss Guard as a conscientious objector is pointing the finger at Pope Francis for discriminating against the guardsmen and blackmailing them into taking the abortion-tainted vaccine.

In an explosive interview published Sunday, the 24-year-old Catholic says the order to vaccinate the guardsmen and fire soldiers who resisted came directly from Francis.

"[My superiors] summoned me. In his office, the commander, who was disappointed and distressed, explained to me that it was definitive; the unvaccinated guards had to leave," Pierre-André Udressy told Italian media Renovatio21.

The commander "informed me that the decision came not only from the Secretariat of State, but from the authority of the Vatican," the soldier said. "I got a letter telling me I had until Oct. 6 get the vaccine or quit. After that date, I would be dismissed."

Asked if the order came from the pope, Udressy responded: "It is so."

Udressy narrated how the coercion "started with the Guard, arguing that we are a police force, and we are close to the Holy Father. So, we had to get vaccinated. For the Guard it is easy: Just give an order since it is a military body."

No Way Out: Decision to Discriminate

"It was also explained that there was no other option, not even waiting an extra month for a traditional type of vaccine. I was told that taking time to argue was impossible. The decision was made," Udressy emphasized.

The halberdier said he contracted COVID-19 during the 2020 Christmas holidays but was not given the legally valid option of using his recovery from the disease to obtain the Vatican's Green Pass, even though he had developed antibodies against the virus.

The Vatican is the center of the Church. It should defend freedom of conscience, freedom in general.

The Holy See discriminated against guardsmen by forcing them to be vaccinated, even though the Vatican's Green Pass rules allow unvaccinated workers and residents the option of regular testing or producing a certificate of recovery from COVID-19, Udressy revealed.

"According to the Vatican decree, the swab [lateral antigen test] should be tolerated for everyone. But that is not the case with the Swiss Guard," he lamented, adding: "In theory, everyone should be tested: The risk is the same for the vaccinated and unvaccinated."

The colors in today's Swiss Guard uniforms have specific meanings

There are a few cardinals and priests in the Vatican who remain unvaccinated and are resisting the jab, but they survive by using the option to be tested every 48 hours, Udressy explained, noting that some of them have commended him for his bold stance.

The French-speaking halberdier, who hails from the Canton of Valais in Switzerland, described how Vatican officials had quashed a vaccine mutiny in the ranks of the Swiss Guard.

"We were given the opportunity to sign up for the vaccination program around Christmas 2020. But no one in the Guard signed up because everyone doubted the vaccine," Udressy said.

No one in the Guard signed up because everyone doubted the vaccine.

The Vatican hosted conferences aimed at persuading the guardsmen, but several questions were left unanswered, the soldier noted. But a doctor "who explained the vaccine and its principles" at the sessions agreed that "it wasn't easy to get COVID more than once."

Doctors told guardsmen that the virus could be transmitted even by vaccinated persons. "They also said that despite the vaccine, mask restrictions and social distancing would not be lifted. It was hard to understand the vaccine's effectiveness and its usefulness," Udressy noted.

Speakers at the sessions "only quickly hinted at" the use of aborted fetal cell lines used in the production, testing or confirmation of the vaccine, "saying that the Congregation for the Doctrine of the Faith had already spoken about it and given its assent," Udressy disclosed.

"I left the conference dazed. The conference gave me more doubts about the vaccine than others. It convinced me not to [get the jab]. I questioned many things," he added.

Most guardsmen signed up for vaccinations by summer, but some still had doubts. But even the remnant "convinced themselves to sign up and get vaccinated" when an ultimatum was issued, Udressy said.

The halberdier said many of his colleagues decided to "continue their careers" and "agreed to be vaccinated." Others made "the terrible choice" having "no choice"; three resigned and three were fired.

In theory, everyone should be tested. The risk is the same for the vaccinated and unvaccinated.

The soldier, who only last year fulfilled his 10-year dream of joining the Swiss Guard, explained there was "no active resistance" to vaccine coercion in the Vatican, even though guardsmen could have demonstrated, asked for justice and made a noise in the media.

"But we were, in the end, very docile," he lamented. Many got vaccinated "to save their job in the Guard. However, I believe the majority did it to escape pressure, to be able to go out, go to the restaurant. Not for medical reasons. For false freedoms."

Udressy concluded his interview remarking he found it "scandalous" that the vaccine was forced and freedoms were supressed, "when it should be something done conscientiously with a doctor."

"The Vatican is the center of the Church. It should defend freedom of conscience, freedom in general. For me, a Catholic, it is something that is not human," he said. "We are no longer trying to defend the truth, but trying to adapt to what is happening outside, and even be the first to apply the changes."

The halberdier, who said it was a "privilege" to be "at the center of the Church, alongside the Holy Father," is returning to Switzerland to resume his former profession as a carpenter.

On Friday, the guardsman wrote an open letter to Pope Francis and Vatican authorities explaining he had "a duty to fight the Vatican City's vaccine mandates, as a Catholic who follows the Magisterium," Church Militant reported.

Swiss Guard commander Col. Christoph Graf reluctantly received the vaccine only a few days ago after being "threatened," several sources within the corps said.

Vaticanist Edward Pentin earlier revealed that at least 30 guardsmen had refused to take the China virus vaccine as recently as July but eventually capitulated after a concerted campaign by the Vatican trying to "indoctrinate and convince" the elite corps to take it.

Resolution 2361 (2021) orders governments to ensure "that citizens are informed that the vaccination is NOT mandatory and that no one is politically, socially, or otherwise pressured to get themselves vaccinated, if they do not wish to do so themselves." 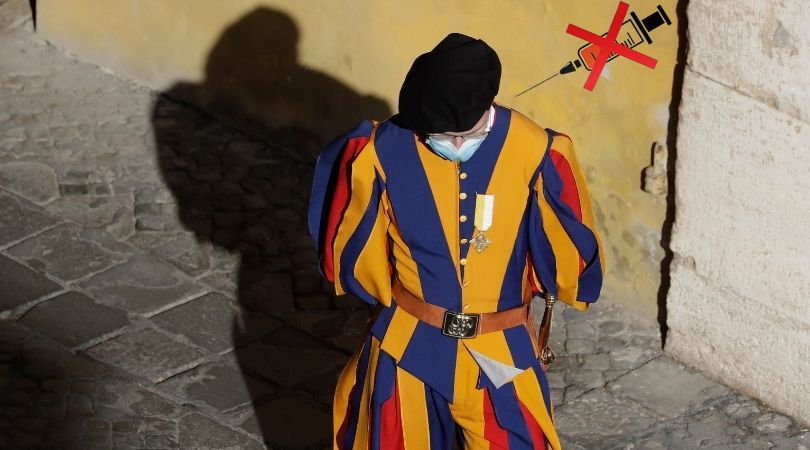