Sympathy for the Pedophile

The fight against "pedophobia" goes mainstream

The piece is titled, "I'm a pedophile, but not a monster." The subtitle reads, "I'm attracted to children but unwilling to act on it. Before judging me harshly, would you be willing to listen?"

Although "pedophile" and "child molester" have often been used interchangeably in the media, and there is some overlap, at base, a pedophile is someone who’s sexually attracted to children. That's it. There's no inherent reason he must act on those desires with real children. Some pedophiles certainly do, but many of us don't. Because the powerful taboo keeps us in hiding, it's impossible to know how many non-offending pedophiles are out there, but signs indicate there are a lot of us, and too often we suffer in silence. That's why I decided to speak up.

While disapproving of acting sexually on pedophilic urges, the article seems to advocate for pedophilia as an identity in the same way homosexuality has come to be considered the basis of an identity. The author, Todd Nickerson, discusses his pedophilia as if it's something that defines who he is.

"I eke out a living (barely) on a freelance graphic design business, in a small town where too many people know who and what I am," he remarks. Later, promoting a support group called Virtuous Pedophiles (which encourages an "anti-contact" approach to children), he states, "It'll make all the difference as they [pedophiles] settle into themselves and learn to accept who they are."

"Those individuals who have the courage to come forward and lay claim to this affliction with the understanding that they only want to use their pedo powers for good should be commended," says Nickerson, "not hated and feared."

Critics of "gay marriage" have long been warning that pedophilia will be the next perversion to be normalized now that society has embraced sodomy wholesale.

Much of the negative reaction spurred on by Salon's article argues that Nickerson's piece, while it doesn't call for allowing child molestation or specific rights for pedophiles, is just the first step in the direction of declaring pedophiles as a protected class. Then, further assaults on traditional morals and sensibilites could be advanced, potentially tearing down all cultural and legal defenses against pedophilia-driven abuse. 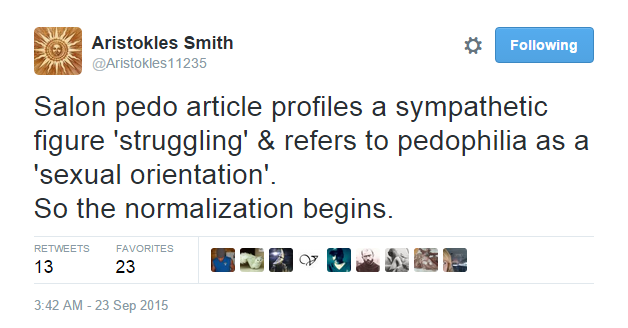 Following Nickerson's piece, National Review Online's Charles C. W. Cooke wrote an article slamming conservatives' objections to it. This mostly just added to the negative reaction, with many critics — especially on Twitter under #NRORevolt — pointing to it as a sign of National Review's false conservatism. 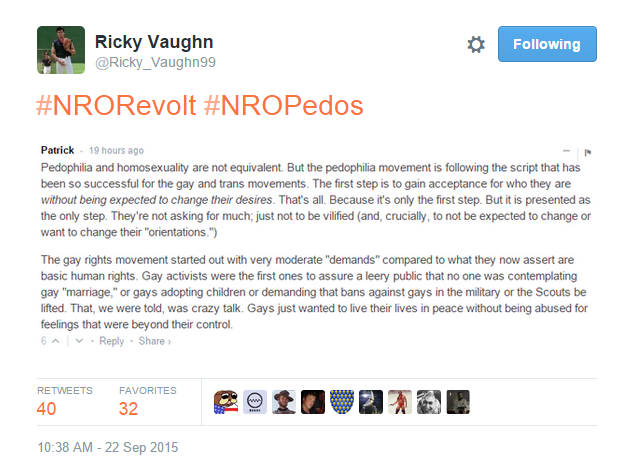 The worries of conservatives — that "virtuous" pedophilia will become a public cause rallied behind in spite of traditional taboos — are apparently becoming a reality. In the original Salon article, Nickerson writes, "There are still holdouts, people who believe that pedophilic feelings should be crammed down into the most subterranean recesses of ourselves, never to be discussed in the open, but these folks are going the way of the dodo bird."