Skepticism Follows Announcement of Synod for ‘Protection of Minors’

Many express doubt that gathering will lead to lasting reform

VATICAN CITY (ChurchMilitant.com) - Pope Francis is ordering the heads of all national bishops' conferences to Rome for a synod on the "protection of minors" from Feb. 21–24, 2019.

As the Pope wrapped up a three-day meeting with his closest advisors Wednesday, Paloma García Ovejero, vice director of the Holy See Press Office, announced a 2019 synod to tackle the clerical sex abuse crisis: "The Holy Father, after hearing the Council of Cardinals, convened a meeting with the presidents of the Episcopal Conferences of all the world to speak about the prevention of abuse of minors and vulnerable adults, as announced in the communiqué published today."

Meanwhile, the Council of Cardinals — which includes prominent leftists like Cdl. Óscar Maradiaga of Tegucigalpa, Cdl. Reinhard Marx of Munich and Freising, Cdl. Seán Patrick O'Malley of Boston and Vatican Secretary of State Cdl. Pietro Parolin — released its own communiqué, saying, "The Holy Father Francis, after hearing the Council of Cardinals, has decided to convene a meeting with the presidents of the Episcopal Conferences of the Catholic Church on the theme of the 'protection of minors.'"

But faithful Catholics are voicing skepticism over the plan, noting the hierarchy's entrenched pattern of sex abuse cover-up.

Another meeting with department heads to continue discussing a scandal that has been unfolding over the course of the last 20 years is the last thing the Church needs right now. What happened to the 300-plus page dossier on the network of sexual corruption in the clergy that Pope Benedict specifically set aside for his successor? Why are whistleblowers, like Abp. Viganò, getting more attention from the Vatican than the people he identified? If Pope Francis had any actual good will intent in rooting out the serious issues in the clergy, he would have started by removing the very prelates he has placed and promoted. But instead, he has called for yet another useless meeting that will further implement policies and procedures that do the same amount of nothing that his zero-tolerance policy does.

Likewise, Regina Magazine's Beverly Stevens told Church Militant the announcement is simply "more spin," as well as "astounding hubris on the Pope's part," considering that "he is implicated himself in covering up horrific sex abuse of orphans and deaf children in Argentina."

"With today's explosive revelations of almost 3700 victims in Germany — again, mostly male teenagers — if he had a shred of decency, he would cancel his fake 'Youth Synod'," Stevens continued. 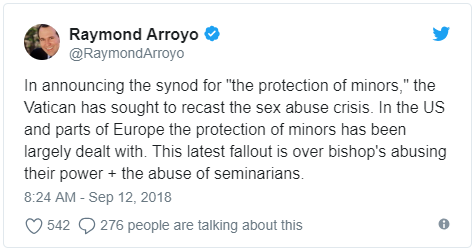 "I actually think that Francis may have the idea that such a bishops' conference might be twisted to push through the 'need' for a married priesthood," she observed. "From there, it's only a few short steps to a homosexual married priesthood."

"However," Stevens added, "across the Church, laity and clergy are beginning to wake up to this agenda. We are hearing confidential reports that big fundraising efforts are falling flat in many U.S. dioceses. If Francis is looking to create schism, this trajectory he's on is a sure way to do so."

EWTN's Raymond Arroyo took to Twitter to voice his concern. "In announcing the synod for 'the protection of minors,' the Vatican has sought to recast the sex abuse crisis. In the US and parts of Europe the protection of minors has been largely dealt with. This latest fallout is over bishop's abusing their power + the abuse of seminarians," he said.

Faithful Catholics in the pew are equally skeptical. Decades of clerical sex abuse cover-up have demonstrated the bulk of the world's bishops inch toward reform only when the outcry against them has become so great as to threaten their positions of power. Even then, real reform has often been elusive.

Church-watchers point to the case of the Dallas Charter, constructed in June 2002 after The Boston Globe exposed clerical sex abuse in Boston. Among U.S. bishops gathering in Texas to hammer out protocols, then-Cdl. Theodore McCarrick, a serial sexual predator, presented himself as a leading voice of reform.

Together with allies among his brother bishops, McCarrick deliberately diluted the Dallas Charter by exempting bishops from its provisions and seminarians from its protections — apparently tailoring the document to protect himself and others like him after decades of abusing those under his authority.

Now, after two-and-a-half months of denials by top U.S. clerics that they knew anything about McCarrick's crimes; of insistence that the root of the problem is "clericalism," not homosexuality; of assurances that the Church isn't facing a "massive, massive crisis," faithful American Catholics — and those everywhere — sense there is little reason to hope another synod of bishops will solve the mess of their own making.