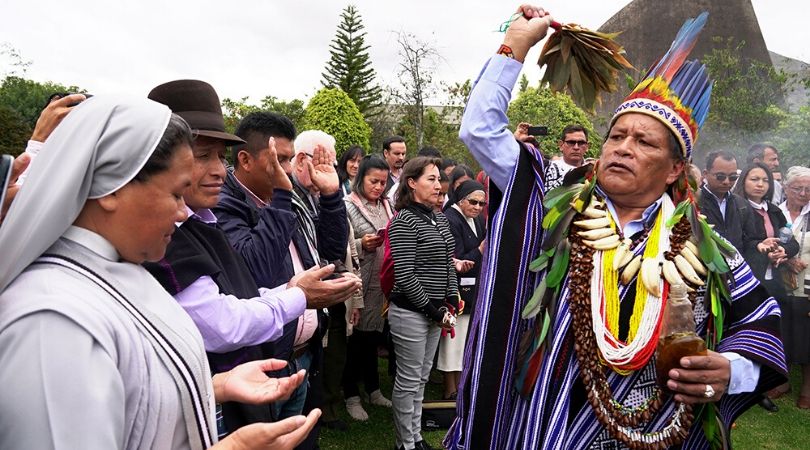 VATICAN (ChurchMilitant.com) - Synod fathers are proposing the creation of an "Amazonian Rite" that will allow the ordination of women to the diaconate and married men to the priesthood.

On Friday, the Vatican published summaries of the synod fathers' circuli minores ("small circles") working groups, with cardinals grouped according to language.

Seven of the 12 groups referred to the possibility of ordaining women as deacons.

Three were strongly in favor, including Portuguese groups A and B, who called for the ordination of married men. One of those two groups said that "the presence of women is decisive in the life and mission of the church in the Amazon."

Ten of the small circles discussed ordaining married men, with two groups calling for ordinations of married men to go forward immediately. Only two of these 10 groups are strongly against it. The two groups that call most prominently for the allowance of married priests were both Portuguese speaking.

However, another Portuguese group appeared clearly against the idea, saying it requires further study.

Eight of the groups referred to arguments on both sides of the issue. One of the Italian groups, appearing firmly opposed, said its members expressed "perplexity" that the synod has not tried to examine more clearly why the celibate priesthood is not attractive to young men.

Italian Group A, moderated by Bp. Flavio Giovenale, proposed ordaining women as acolytes: "We propose that the ministry of lector and acolyte also be conferred to women, religious or lay, adequately trained and prepared."

Portuguese Group A stressed that new paths for ordained ministries are "necessary and urgent" and the ordination of women would give "a feminine and maternal face to the Church."

Italian Group B stressed that the new rite should be allowed to develop its own spirituality, theology, liturgy and discipline based on the "singular richness of the Catholic Church in the Amazonia."

The ordination of women would give 'a feminine and maternal face to the Church.'

The Amazonian church could no longer depend on "imported models" of ministry, and ministerial formation must be "inculturated" and "build its own face," according to the small groups discussing the proposals.

The ordination of viri probati (married men whose virtue has been tested) was considered necessary for the Pan-Amazon region, the small circle group reports categorically stated.

The proposals suggested entrusting the implementation of the ordination of married men to the bishops' conferences or to individual bishops.

Twitter is tagging this video as "sensitive material", to make it impossible to it to spread.

This took place INSIDE OF A VATICAN CHURCH, in front of the Tabernacle! pic.twitter.com/UCraOMnOdi

Synod fathers argued for ordaining women to the diaconate as a "valid argument" based on the "decisive presence of women in the history of salvation" and on the restoration of the permanent diaconate to married men by the Second Vatican Council.

Italian Group B underlined the importance of Pope Francis' initial intervention at the synod when he stated, "The pastoral dimension is the essential one, the one that includes everything. We face it with a Christian heart and look at the reality of the Amazon with the eyes of a disciple."

Synod fathers from Italian Group A and Portuguese Group B said that the Amazon is "living a Kairos" (Greek for "opportune time") that has particular significance for this synod.

The small groups also admitted that the exponential growth of neo-pentecostal and evangelical movements is the most significant cause of "the drastic reduction of Catholics" in the region:

These grow because they respond to the need for healing, proximity and salvation beyond their very questionable economic and political interests. In addition to expressing our concern for the growth of these new religious denominations, we are provoked to move from a still-too institutional image of the Church to an outgoing Church that listens, and which creates communities that rejoice and celebrate the beauty of the Gospel.

Italian Group B said it is imperative for the Church to develop knowledge of the Bible by multiplying translations into local languages, to allow for "interreligious and ecumenical dialogue."

At #SinodoAmazonico #AmazonSynod Presser; +Rino Fisichella, President of the Pontifical Council for the Promotion of the New Evangelization, explains why he is in favor of an Amazonian Rite: "let us not forget, in the Latin Rite, there is the Ordinary and Extraordinary Form" pic.twitter.com/LhHMq1Qrsq

Defending the call for a new Amazonian rite, the same group observed that there were already about 23 different rites in the Catholic Church. This, they said, is a clear sign of a tradition that from the first centuries tried to inculturate the Faith and liturgy through a language that was as coherent as possible in order to express the Sacred Mysteries of the Church.

These rites originated according to the mission of the Church, and the Amazon with its different cultures and traditions already began the formal process over two years ago.

The synod cited Lumen Gentium, giving the example of the Eastern Churches with their own rites and a married priesthood.

These churches "established in various places by the apostles and their successors … enjoy their own discipline, their own liturgical usage, and their own theological and spiritual heritage," according to Lumen Gentium.

Portuguese Group A confirmed the proposal to create an episcopal body representative of the local churches of the Pan-Amazonian region, attached to the Latin American Episcopal Council (CELAM).

On the first day of the synod, Sr. Teresa Cediel Castillo, M.ML. told a reporter that women "ministers" in the Amazon were already administering the sacraments:

"They know that they are baptized, and therefore, prophets and priests," she said. "Women baptize children. If there is a marriage, women witness the marriage. If someone has need of confession, we listen 'to the bottom of our hearts.' We may not be able to absolve [according to the Church], but we listen 'with humbleness.'"

At #SinodoAmazonico #AmazonSynod Presser; Paolo Ruffini, Prefect for Communications, angry about questions on pro-abortion Ford Foundation's funding of Cimi, disdainfully says "I'm asking you, is it better for the Ford Foundation to use that money for non-Christian purposes?" pic.twitter.com/jZODWjQVbY

At Friday's press conference, Abp. Rino Fisichella, president of the Pontifical Council for the Promotion of the New Evangelization, confirmed the proposal for creating an Amazonian rite, which would include not just a liturgical rite for eucharistic celebration but a broader rite that would introduce a new discipline for the Amazon church.

"As a Catholic, as a Christian, I think it's good that money goes to good deeds, and I'm asking you if it's better for the Ford Foundation to use that money for non-Christian purposes?" he asked, justifying the bishops' acceptance of what some critics have called "blood money."

10/20/2019: This article was updated with added information about the small circle discussion groups.