Code word for a democratic Church?

The abuse of so-called synodality is being used by some prelates to attack the Catholic Church at the same time certain Church leaders use it to adopt heterodoxy.

Just a generation ago, among many American Church theologians, the term à la mode was "collegiality." It was used in the aftermath of the Second Vatican Council by many of these clerics and their ilk in academia to foist nebulous theological concepts upon unsuspecting and gullible Roman Catholics impressed by the fancy term.

Local council XYZ discusses some shady topic ... yada, yada, yada ... and by a majority vote is approved. You know, collegiality! Majority rules! Have no worries — if the majority of some committee votes on whatever and approves it, it can't be a bad thing; Or can it?

Not so surprisingly, the term collegiality had its day in the sun and never really caught on across the pond. As noted in Separated by a Common Language:

Professor American expressed his dismay at our news and how it had been delivered to us and the campus — that he felt a lack of collegiality in the way that we were treated.

As soon as he went back to his table, my British colleague said, "I love that word collegiality. It's really an American thing, isn't it?"

Here in the United States, many nefarious liturgical practices such as reception of Holy Communion in the hand and errant ideas such as ordaining homosexuals ended up being adopted by Roman Catholics. This was not because the Second Vatican Council voted on and mandated them, but simply because alpha bishops virtually bully whipped into compliance the priests and laymen in their jurisdictions.

And now, a generation later, many young priests are finding no real basis in the Vatican II documents for this about-face in the form of saying Mass and so have returned to the ancient practice of facing God when offering the Holy Sacrifice. It's this orthodoxy that has attracted many young people to return to the Church.

The propriety of the word "synodality," depending on which pop theologian you talk to, hinges on how it is defined. For a little living-color illustration of how a simple word like synodality can obfuscate the evils playing out exponentially in the Church, try wrapping your mind around what is being said — or not said — in this short quote from America Magazine:

Journeying together — laity, pastors, the bishop of Rome — is an easy concept to put into words, but not so easy to put into practice. After stating that the people of God is comprised of all the baptized who are called to "be a spiritual house and a holy priesthood" (LG 21), the Second Vatican Council went on to say that "the whole body of the faithful, who have an anointing which comes from the Holy One, cannot err in matters of belief."

Talk about some whoppers of half-truths thrown together in a single paragraph! The Second Vatican Council may have said that "the whole body of the faithful, who have an anointing which comes from the Holy One, cannot err in matters of belief." But, when a small group of bishops gets together, how is this by any stretch of the imagination representative of the whole body of the faithful? Has any one of us as a layman voted on who is his bishop? Or is there any guarantee that what is decided on by this group of guys is free from error? Maybe, just perhaps, the entire lot of those gathered are deceived! Great deceptions have happened before — with grave consequences. Take for example what happened to Adam and Eve in the Garden of Eden.

One reason why concepts like "collegiality" and "synodality" get so much leeway with laity these days is that most lay Catholics value democratic governments over other forms, which is all fine and good. But, then in their naivety, they presume the Church has worked over the centuries in some sort of a similar democratic fashion, or that God operates democratically. Both concepts are erroneous.

Let's start with the misconception that God works democratically. There is absolutely no scriptural or historical basis for holding this position. In fact, Scripture records that over the millennium, God has called specific individuals close to Himself, and these individuals God has used to make known who He is and use them in his plan of redeeming humanity.

God revealed Himself to Abraham. And Abraham entered into a covenant with the Almighty. During the days of Abraham, what did not happen was a group of men sitting around a campfire and deciding that the Almighty was One God as compared to several.

And I tell you, you are Peter, and on this rock, I will build My Church, and the gates of Hell shall not prevail against it.

Let's bump it up a thousand or so years and talk about New Testament times. Christ did not establish a governing body of 12 men to establish rules and so forth to guide His fledgling Church by majority vote. He put Peter in charge as a sovereign: "And I tell you, you are Peter, and on this rock, I will build My Church, and the gates of Hell shall not prevail against it" (Matthew 16:18). And the Church over the last two millennia has operated surprisingly well under this monarchy. Why, at this late stage in the game, should anyone think that because some nations are ruled through one version or another of democratic governance, the Church should adopt some such form of it as well?

Mic'd Up Report: 'Thou Art Peter'

Another misconception with respect to the Church and its governance has everything to do with erroneously looking back at past councils of the Church and thinking they operated in some fashion akin to the U.S. Senate, or say England's House of Commons. These assemblies have participants selected by vote in the regions they serve and their proceedings follow Robert's Rules, or some such protocol. Nothing could be further from the truth, if you look back at Church councils.

Take for example the great Ecumenical Council of Nicaea, called by the Emperor Constantine in 325 to end the disunity of the Faith in his empire. The Council of Nicaea, apart from having a large number of bishops participate from various regions of the Empire, did not have any lay representatives, nor from day one imagine itself to have the authority to deviate at all from precepts of the Faith as found within the body of the Sacred Scriptures or commonly understood Sacred Tradition. Constantine, who opened the council on May 20, 325 commanded the participating bishops, priests and deacons to end all divisive rhetoric, as recorded by Theodoret at the time:

He pointed out how dreadful it was, aye, very dreadful, that at the very time when their enemies were destroyed, and when no one dared to oppose them, they should fall upon one another and make their amused adversaries laugh, especially as they were debating about holy things, concerning which they had the written teaching of the Holy Spirit. "For the Gospels," (continued he) "the apostolical writings, and the oracles of the ancient prophets clearly teach us what we ought to believe concerning the divine nature. Let, then, all contentious disputation be discarded; and let us seek in the divinely inspired word the solution of the questions at issue."

The outcome of the Council of Nicaea was clear from Day One, the first Christian emperor of the Church, who had brought peace to his empire, was determined in a like fashion as temporal king to end all squabbles among proponents of heretical beliefs. One incident that took place at the very start of the Council of Nicaea — which revealed Constantine's true character and demonstrated to all assembled that he was a no-nonsense sort of emperor — was the burning en masse, in public, the lobbyist proposals submitted to him by self-promoting prelates; to condemn so and so, to exile such and such men, and so forth. As recounted by Socrates at the end of the council:

For several of them had brought accusations against one another, and many had even presented petitions to the emperor the day before. But he, directing their attention to the matter before them, and on account of which they were assembled, ordered these petitions to be burnt; merely observing "that Christ enjoins him who is anxious to obtain forgiveness, to forgive his brother." When therefore he had strongly insisted on the maintenance of harmony and peace, he sanctioned again their purpose.

If the Church in the future should convene a council of any sort, this precedent of destroying the lobbyists' protocols, recommendations and condemnations must be included on Day One. Talk about one effective tool for eradicating the B.S. fermented by alpha-male personalities who think because they know best, their individual perspectives upon this, that and the next should be adopted!

Recall Chicago cardinal Blase Cupich's positioning of himself at the meeting of the 2018 gathering of U.S. bishops. Here is a man who has the claim to fame of being America's most unliked bishop and yet he pontificates at the annual U.S. bishops' meetings as if he were pope! And he is in charge of an archdiocese that is not supported by any popular acclaim. If you look closely at Cupich's fan base, his support comes from the pro-abort politicians whose favor he curries, but not from the regular Sunday Mass attendees in Chicago who detest him, whose parishes in the city he has widely shuttered.

"Synodality," as it's currently being abused in Germany and the like, is fundamentally just a load of B.S. It's being used as another ruse by some alpha prelates to steer the Church away from orthodoxy. Like the abuse of the term collegiality in the aftermath of the Second Vatican Council, lots of errant practices were mainstreamed by use of the ruse, as if to say, "Well everyone voted for it: It's the guidance of the Holy Spirit." For naïve Catholics, in the aftermath of Vatican II, this ruse worked for a time.

But in 2021, Catholics are not so naïve, and not so gullible as to blindly follow a group of alpha male prelates pushing an agenda and a narrative that runs fundamentally opposed to the doctrines of the Church as found in our Sacred Tradition and our Sacred Scriptures.

'Synodality,' as it's currently being abused in Germany and the like, is fundamentally just a load of B.S.

The list of anathemas from those pushing a false sense of synodality is legion. But the ruse is up; it is no longer the swinging '70s where anything goes. It's demonic how a bunch of men in their 70s operate as if the '70s never ended! It's 2021 already!

Catholics these days are cognizant of their Sacred Tradition and will not let an elite group of uninspired, false shepherds hoodwink the faithful yet again! Your nonstop synodal gatherings that discuss canceling established Church teachings are neither inspired nor of God, and we the laity will reject them! 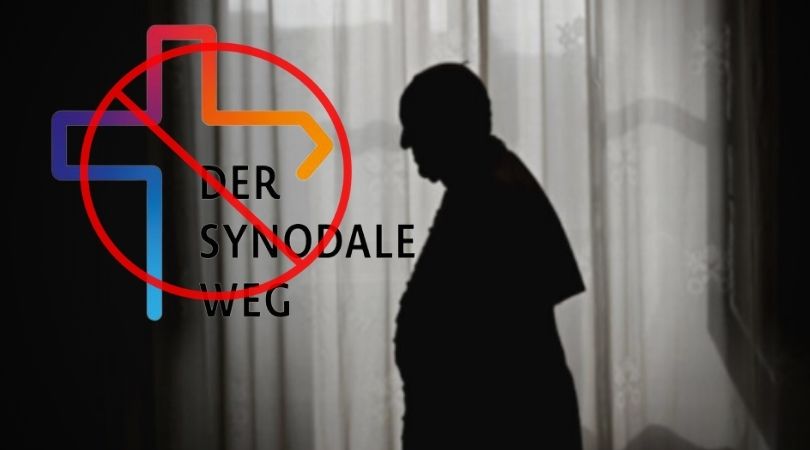