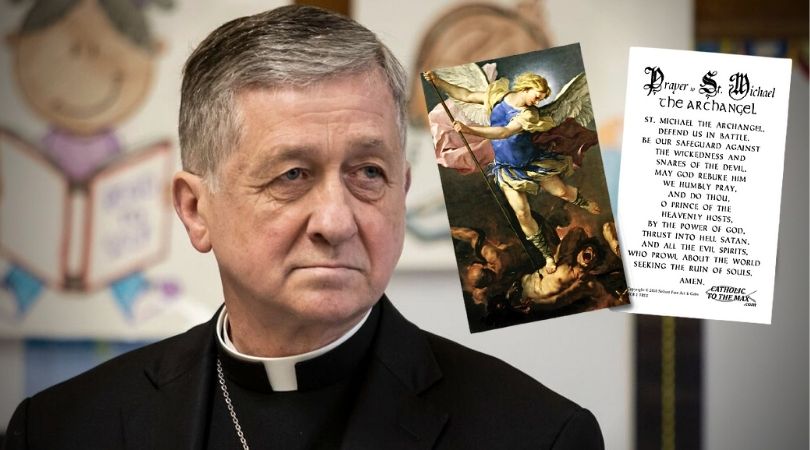 Just this past week, a young priest in the archdiocese of Chicago, Fr. Emanuel Torres Fuentes at St. Joseph's parish in Libertyville, gained notoriety for his short announcement at the end of his livestreamed Mass. Fuentes announced that, according to Cdl. Blase Cupich's instruction, he (and anyone else for that matter) is no longer permitted to say aloud after Mass the Saint Michael Prayer or even a Hail Mary. The video announcement went viral, as God-fearing and Devil-hating faithful Catholics just could not believe how off base Chicago's cardinal could be! As if prayer of any kind could not benefit the faithful in the evil times in which we live!

Many Catholics were asking themselves after viewing the announcement if this man was a devil incarnate! He has no right whatsoever to tell us to end our devout participation in the Holy Mass with the Saint Michael Prayer!

And to add more obfuscation and melodrama to the situation, on Saturday the pastor of St. Joseph parish, Fr. John Trout, Fr. Fuentes' boss, weighed in heavily in Cdl. Cupich's defense.

Father Trout stated publicly, as reported in a CNA article: "Fr. Fuentes wishes to state that he misspoke at a recent Mass when he falsely attributed statements to Cdl. Cupich. For this reason, the video of that Mass has been removed to avoid any confusion."

Excuse me, Fr. Trout, but Fr. Fuentes is a grown man. If he misstated something attributed to the cardinal, is he not capable of making that apology himself to the world at large?

Moreover, Fr. Trout, your long-winded rationalization misses the most important point stated clearly by Fr. Fuentes in his video: a decree was in fact handed down to nix these prayers from being said in unison. So, Fr. Trout, your explanation — meant to unsully the perpetrator — only renders observers all the more incredulous.

Father read the directive for all to hear and see. The document was lying on the altar. Is this just a figment of Fr. Fuentes' imagination? Did Fr. Fuentes make up this directive? To cover for Cdl. Cupich is lame at best; no one thinks a priest would cite a superior for a controversial edict unless he had the goods to back it up. It was quite obvious Fr. Fuentes was citing exactly what he'd been told and from whom it had come. But Cdl. Cupich's (predictable) involvement aside, where is your horror at the decree on its face?

This venerable practice of saying the St. Michael Prayer at the end of Mass was re-started by the faithful following the Summer of Shame to ask St. Michael's help in ending homosexual predation in the Church. Excuse me, Fr. Trout, but the fellow who forced the edict (while a surprise to no one) is less an affront than the edict itself — an egregious move to strip the faithful of two of the most powerful spiritual weapons employed by Catholics against the homo-monstrosity strangling Holy Mother Church.

It's an egregious move to strip the faithful of two of the most powerful spiritual weapons employed by Catholics against the homo-monstrosity strangling Holy Mother Church.

The Saint Michael Prayer was introduced to the Roman Catholic Church by Pope Leo XIII in 1886 after a mystical experience he underwent two years earlier. This prayer, begun at Pope Leo XIII's insistence, was to be said by the congregation in unison at the end of every low Mass offered. This devout practice of the laity continued uninterrupted for almost a century, up to 1964 and despite two world wars and the Spanish flu pandemic.

For some reason, on Sept. 26, 1964 — exactly 77 years after its inception — the holy practice of saying the Saint Michael Prayer at the end of low Masses was suppressed unceremoniously in an instruction on liturgical norms called "Inter Oecumenici," published by Consilium (a sub-council of Vatican II) and accepted by Pope Paul VI. The Saint Michael Prayer was discontinued by this subcommittee of the council with the bland line, "The last gospel is omitted; the Leonine Prayers are suppressed."

It's ironic that after all the fanfare and solemnity in which the Saint Michael prayer and other Leonine prayers were introduced by Pope Leo XIII, that in one simple line of prose, accompanied by no justification or rationale whatsoever, the entire lot of prayers simply disappeared! As if the Church no longer had a need for these prayers and its adversary, the Devil, no longer existed!

It's hard to fathom how the authors of "Inter Oecumenici" in 1964 could so blithely write off the Saint Michael prayer; the Soviet Union during that year was poised to devour all of Europe and the communists in Vietnam were violently and murderously taking control.

Blessedly, Pope St. John Paul II in 1994 rehabilitated for the Church the Prayer of Saint Michael when he urged each and every devout Catholic not to forget the archangel's help. Besides the group recitation, he urged the faithful to say it often "to obtain help in the battle against forces of darkness and against the spirit of this world."

So, today, a full century after Pope Leo XIII introduced to the Church the Saint Michael prayer, many faithful have come to a renewed belief in its efficacy — a prayer as pertinent today as it ever was to fight the Devil and all other adversaries of Christ and His Church. And if men like Cdl. Cupich do not think this prayer should be said following the Holy Mass, so be it. Cupich is entitled to his opinion.

But his ire against the faithful and faithful priests like Fr. Fuentes has certainly backfired! The kerfuffle over the livestreamed (and now deep-sixed) proclamation has begun conversations among the faithful worldwide, who will now be saying this powerful prayer at Masses' end because they now appreciate not only how it started and why, but how effective it must be if one of the most scandalized prelates in the Church wants it gone. They'll add their voices to congregations already using it, say it with others in their pew in churches that don't, or just pray it devoutly on their own.

Regularly recite the Saint Michael Prayer 'to obtain help in the battle against forces of darkness.'

Our merciful God who hears all prayers — even those said quietly as to not to offend the cardinal's ears — will most certainly answer these sincere supplications. Following this latest ridiculous scandal, many are awakening with questions about the mighty Saint Michael Prayer. Few have any questions left about Cdl. Cupich.