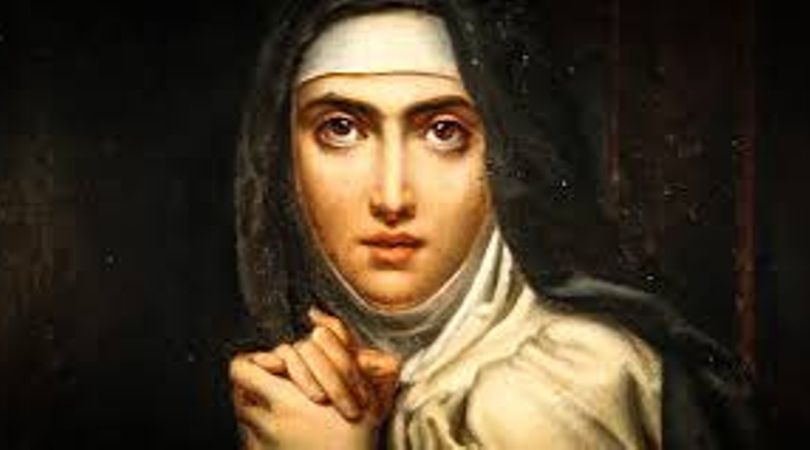 Saint for all seasons — and synods

If St. Teresa of Ávila, the 16th century nun, could time travel to the Amazonian synod, she would not be a happy person. Life is like a night in a bad inn she is to have once said, and she would find many things about the synod bad indeed.

Teresa was a great protector the Catholic faith — desired death by martyrdom as a child — and was deeply upset by the “Lutherans," a term she liberally used to describe all those breaking from the faith. She thought the devil was snagging them away to hell and was worried about their souls. She wanted to rescue them through penance until she could find more effective measures.

Cardinal Marx and the leftist-leaning German synod bishops might find their current plans lambasted by this faithful, tireless nun, who reformed the Carmelite order, wanting to do all she could for Christ’s church on earth knowing there would be time to rest in Heaven — although she is said to have discussed doing God's work in Heaven as well.

It is interesting — even entertaining — to imagine what she might say to the intellectual hefties of the German Church who are now making mass change to the "face of the Church."

She might well suggest that they start reforming the Church by reforming themselves — donning discalced sandals as a good way to start.

But St. Teresa has not time-traveled to Rome for the synod and the progressive bishops — and their UN associates – would certainly describe her take on matters, the first female doctor of the Church, as "out of touch" – as they have described Jesus.

They may even argue that were she to be dropped into their world, she would no doubt see things as they do, appropriating her as they have St. Francis of Assisi.

Or they might shun her as a “dragon traditionalist” whose life represents a backward and irrelevant past.

But to ignore Teresa would be to ignore the mind-boggling contributions she left behind --and the huge talents that have been inspired by her throughout the centuries.

Born from a converso family in 16th century Spain, Teresa left her home to join the Carmelites in Avila despite the consternation of her father.

She lived in a convent of ease and even luxury, as was often the case in those days and place. The convents often served as places where well-to-do women who did not marry came to live, replete with their riches and servants.

Teresa herself was, at first, part of this station. But it is said that a statue of our suffering Lord — that exists to this day in Ávila — gave her deep spiritual pause which caused her to ask: "Who is this Man? And why is he suffering?"

The asking and the answering of this question was to lead to Teresa’s mystical prayer experiences, her writing masterpieces of Catholic and Spanish literature and to the successful and long-lasting reformation of 17 Carmelite convents throughout Spain.

The saint was nothing without her being a person devoted to prayer — even union — with God. It is said that Teresa was besieged by raptures and visions, desperately trying to steer a course toward heaven, suffering to discern if the visions were from and of God.

A look at Bernini's famous sculpture in the Cornaro Chapel of the Church of Santa Maria della Vittoria in Rome does much to describe the quality and timber of Teresa's prayer life as what Teresa described in her biography Bernini dramatized in marble. Teresa wrote that she saw in an angel's hand

a long spear of gold, and at the point there seemed to be a little fire. He appeared to me to be thrusting it at times into my heart, and to pierce my very entrails; when he drew it out, he seemed to draw them out also, and to leave me all on fire with a great love of God. The pain was so great, that it made me moan; and yet so surpassing was the sweetness of this excessive pain, that I could not wish to be rid of it ...

Teresa's Las Moradas represents as thorough a treatise on how to pray, starting with rote prayer to union with God, as anything any Church Father has yet written. It is inspired by her vision of the soul as a diamond in the shape of a castle containing seven mansions, which she interpreted as the journey of faith through seven stages, ending with union with God.

The diminuative nun also gave her Carmelite sisters The Way of Perfection, calling it a "living book" in which she taught her nuns how to progress through prayer. In it she gave an explication of the Our Father that helps "perfecters" of prayer life to this day. As Teresa said: “As we repeat the Our Father so many times ... let us delight in it."

Teresa's prayer life was not overshadowed by her administrative skills — something the synod planners might well admire.

Taking on the laxity and decadence of her order, when she was 47-years-old, she founded her first reformed convent named for St. Joseph, for whom she had a life-long devotion. Teresa went on to found and reform 16 more convents throughout Spain, all against the backdrop of the Protestant reformation sweeping Europe and the Spanish Inquisition.

Teresa eschewed the titles aristocratic women brought with them to the convent, choosing to be called Teresa of Jesus, and urging her sisters to follow suit.

Not often discussed is that Teresa is responsible for a lineage of modern Catholic holy women and saints of great influence.

Saint Thérèse of Lisieux (1875-1898), the French Carmelite, was named for Teresa, and took as her religious name Sister Thérèse of the Child Jesus.

Edith Stein (1891-1942) is said to have converted from atheism after reading Teresa’s biography and eventually took the name of  Sr. Teresa Benedict of the Cross. Stein said, "When I had finished the book, I said to myself: This is the truth."

Dorothy Day (1891-1980) narrates in her autobiography The Long Loneliness that after Teresa's biography fell into her hands, her life direction changed course. Day also named her daughter Tamar Terese in honor of the 16th century saint.

And of course Mother Teresa of Calcutta’s name is a nod to all of her above Teresian namesakes.

Teresa is also known for her down-to-earth sense of humor. One often-quoted is embedded in Teresa making her way to a convent in the middle of a rainstorm. She slipped down an embankment and fell into the mud. She looked to Heaven and said to her Maker,  "If this is how You treat Your friends, no wonder You have so few of them!"

So fully dimensional is the person of Teresa of Jesus – nun, reformer, sister, Mother, writer, mystic, friend to John of the Cross, administrator, doctor — her feast day is not easily documented in words.

A prayer attributed to St. Teresa, whose soothing words are known for instilling peace in those who pray them, may serve as a more suitable ending:

Let nothing disturb you,
Let nothing frighten you,
All things are passing away:
God never changes.
Patience obtains all things
Whoever has God lacks nothing;
God alone suffices.

Teresa of Jesus was canonized in 1622 and elevated to doctor of the church in 1970 by Pope Paul VI, the first woman to be so honoured.