Opponent has 'meltdown,' booed off stage

SAN ANTONIO (ChurchMilitant.com) - Pro-life Republican James Dickey was re-elected as the Texas State GOP chairman on Friday after facing a challenge by Republican Cindy Asche, and an hours-long fight on the floor of the GOP convention at the Henry B. Gonzalez Convention Center.

As Mike Stasiowski, a delegate from Brazos County in College Station, explained to Church Militant, the chairman of the Republican Party is elected every two years by the delegates at the state convention. Dickey was the preferred nominee of 22 of the 31 Senate districts at the convention, but Asche also qualified for nomination by winning more than 20 percent of the Senate districts.

"There was a minority report that was presented that suggested Cindy Asche to be the preferred nominee," Stasiowski told Church Militant. "While we were debating the minority report, accounting director Jennifer Stoner used that time to resign her position in protest."

Asche was quoted by The Texas Tribune, saying, in reference to the Stoner resignation, "She has never seen the level of dishonesty, manipulation and erroneous reporting that she has seen from this chairman and her direct quote was '[Dickey] is not trustworthy.'"

Stasiowski told Church Militant that Asche "went on a five-minute rant to throw as much mud as she could at Dickey. She referenced Jennifer Stoner and claimed that Dickey was lying about the party finances. It appeared to me to be a political meltdown. She was booed off the stage."

Stasiowski also said that the State Republican Executive Committee met after the convention, and Dickey insisted that there be another audit conducted to put Stoner's claims to rest.

Dickey told the floor of delegates, "Whether you voted for me this afternoon, or not, we are all Texas Republicans. And we have a singular goal in front of us, in November, to beat the Democrats."

Dickey continued, "Let's now come together, show each other the grace, forgiveness and teamwork that makes us the better party, the better people, the better Texans."

Church Militant has covered developments in the continuing fight between solid pro-life Republicans in the Texas legislature and what Texas Right to Life calls RINOs or Republicans in Name Only.

The few differences between the ruling class, an unholy alliance of elitist Republicans and Democrats, are measured in degrees and are accidental, not substantial.

In May 2017, Texas Right to Life President Jim Graham told the N.E. Tarrant Tea Party, "The few differences between the ruling class, an unholy alliance of elitist Republicans and Democrats, are measured in degrees and are accidental, not substantial."

Graham went on to slam what he called the "cartel of liberal Republicans in name only," saying, "this group only cares about maintaining power for the most venal reasons, and they do so by begrudgingly doling out the minimum acceptable to watchful voters but careful enough to keep the Democrats on their plantation."

In February, the Texas Conference of Catholic Bishops issued an "advisory" slamming Texas Right to Life and directing Catholics to other pro-life groups which have backed RINO Republicans such as Byron Cook, who killed an amendment in 2017 which would have protected the disabled unborn from abortion.

Bishop Michael Olson of the diocese of Fort Worth was among the most vocal regarding the advisory, going so far as to send out a tweet reading, "Please notify my office if your parish did not include the advisory bulletin insert or a pulpit announcement."

Church Militant replied to the tweet with a video clip of Olson stating "the obedience one makes as a promise is never at the violation of one's conscience," and continuing, "obedience is a subordinate virtue to justice."

Church Militant asked, "What if the priests disagree with your attack on @TXRightToLife & don't want to read the parish advisory? Will you respect their conscience?" 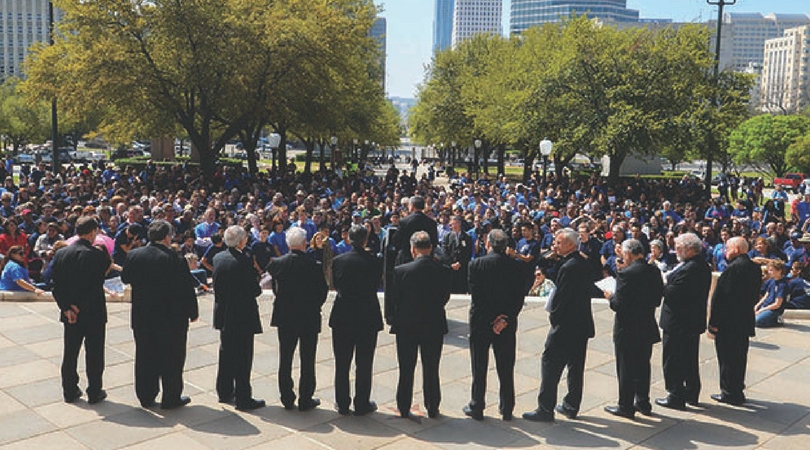