FORT WORTH, Texas (ChurchMilitant.com) – Supporters of an embattled Texas priest are challenging their bishop's version of events.

Earlier this year, Bp. Michael Olson of Fort Worth requested the resignation of Fr. Richard Kirkham, former pastor of St. Martin de Porres parish in Prosper. Olson had accused the priest of failing to report a fellow priest's sexual misconduct and of sending the same priest a "lewd" and "threatening" letter. Kirkham stepped down on June 4.

In response, Kirkham's supporters formed the FRK Advocates group, which launched a petition calling on the Vatican to investigate Olson. Church Militant reported on Olson's reply, which attacked supporters for staging what the bishop called a "destructive social media and political campaign" to "discredit and disrupt" him.

I don't think [Olson] has dealt with Fr. Kirkham in a fair way.

"I don't think [Olson] has dealt with Fr. Kirkham in a fair way," Walsh said, calling the bishop's actions "rash and impetuous" and not "well thought-out."

According to Walsh, in October Kirkham learned that a priest of the diocese of Dallas was having an affair with a woman in his parish office. Kirkham admonished the priest to end the affair, and the priest agreed to do so. At the time, Kirkham believed the situation had been resolved.

In January, however, Kirkham learned the affair had continued. He confronted the priest again, who became angry with Kirkham for "harping" on the topic and who began to reject Kirkham's phone calls.

Kirkham sought professional advice on how to handle the situation. He resolved to make one last attempt at "fraternal correction" by sending the priest a draft letter detailing his knowledge of the affair and informing the priest he would report him to the diocese if he did not resolve the situation.

According to Walsh, the normative process under canon law when one priest learns of another's misconduct is to attempt a "fraternal correction," that is, to privately urge the priest to cease his misconduct and make amends. Only when fraternal correction fails are reporting priests expected to go to superiors.

An ordinary is to take care to initiate a judicial or administrative process to impose or declare penalties only after he has ascertained that fraternal correction or rebuke or other means of pastoral solicitude cannot sufficiently repair the scandal, restore justice, reform the offender.

In his letter, Kirkham quoted his conversations with the Dallas priest, and also told him he should seek help for a drinking problem. Olson called the letter "threatening" and "lewd," a characterization Walsh rejects (except insofar as Kirkham informed the priest of his intent to report him and quoted the Dallas priest's own vulgarity).

"He wanted to make the other priest aware, 'This is what I have to report. This is what you told me,'" Walsh told Church Militant. "It was blunt."

On June 4, Kirkham was summoned to a meeting with Olson and others, which lasted three hours. According to Walsh, Kirkham was not informed of the meeting's purpose and was "blindsided." Olson asked Kirkham whether he had contacted Dallas bishop Edward Burns regarding the other priest. Kirkham said he had not, and Olson ordered him not to do so.

Olson then told Kirkham his letter was "unbecoming of a priest," saying that "everyone can see" Kirkham is "obsessed" with the recipient. Walsh rejects the characterization.

Olson demanded Kirkham's resignation, threatening suspension otherwise. Olson would not have been able to directly remove Kirkham as pastor by canon law, Walsh told Church Militant, so instead he "browbeat" and "threatened" him into resigning, which Kirkham did "under duress."

Kirkham would have known to refuse "if he had spoken with counsel for five minutes," Walsh said.

Olson claimed that Kirkham never intended to report the Dallas priest, and that he admitted as much to Olson and other witnesses. But Walsh denies Kirkham made such an admission.

Kirkham "wouldn't have sent the letter if he wasn't intending [to report the other priest]," Walsh said, referring to the letter's opening: "You are being reported to the Dallas Diocese for Sexual Misconduct …"

At the June 4 meeting, Kirkham was also ordered to report to St. Luke's Institute in Maryland for psychiatric evaluation. Church Militant has previously reported on the Institute's abuse of psychiatric healthcare to silence and punish faithful priests.

Kirkham arrived at St. Luke's on June 7. While there, he made his first contact with his attorney, Walsh. The two were put in contact by fellow St. Martin's parishioner and FRK Advocates member Stephen Knobbe. On June 14, Kirkham left St. Luke's "of his own volition," feeling "he was being set up."

Canon 188 states, "A resignation made out of grave fear that is inflicted unjustly or out of malice, substantial error, or simony is invalid by the law itself."

And Canon 189 §4 states, "A resignation can be revoked by the one resigning as long as it has not taken effect; once it has taken effect it cannot be revoked, but the one who resigned can obtain the office by some other title."

The same day Kirkham's rescission was submitted, Olson suspended him in what Walsh called a "retaliatory" act. According to Kirkham's canon lawyer, the suspension was inappropriate, and Kirkham filed a petition to Rome challenging it. Olson also issued a "precept," or gag order, prohibiting Kirkham from speaking to anyone at St. Martin's or at the other priest's parish.

Olson later provided the private letter to the Fort Worth Star-Telegram, which reported on its contents on Aug. 3. In accompanying comments, Olson claimed Kirkham never reported the Dallas priest's misconduct.

Walsh, however, called this characterization "absurd," since Kirkham was prevented from formally reporting the priest while already in the process of addressing the situation, and was then suspended for having not made a report, making Olson's story "just not true."

Following removal from St. Martin's, Olson threatened Kirkham with arrest if he tried to re-enter the parish rectory. On June 26, Judge Mike Oglesby allowed Kirkham re-entry to retrieve his belongings.

The Star-Telegram published what Walsh called two "defamatory statements" by Olson in its Aug. 3 report. The first was a "more than loaded" innuendo that Kirkham was removed to "protect the safety of children." The second was Olson's central claim that Kirkham failed to report sexual misconduct. Walsh responded to Olson's statement in a letter dated Aug. 6 to the Dallas diocese's attorney.

Olson and the Dallas priest were "good friends" in regular contact, Walsh said. In his Dec. 15 reply to the FRK Advocates' petition, Olson noted that he was rector of the seminary the priest attended, Holy Trinity.

Walsh referenced a report of a Dallas diocese statement claiming "the diocese did not directly receive Kirkham's letter but says officials immediately conducted an inquiry upon learning of its contents." Walsh speculates that, attempting to preemptively discredit Kirkham before he came forward, the Dallas priest contacted Olson directly regarding the letter, rather than going to Burns, as Olson claims.

Kirkham maintains he never signed the letter, and the signature appearing on the excerpt published by the Star-Telegram is a forgery. 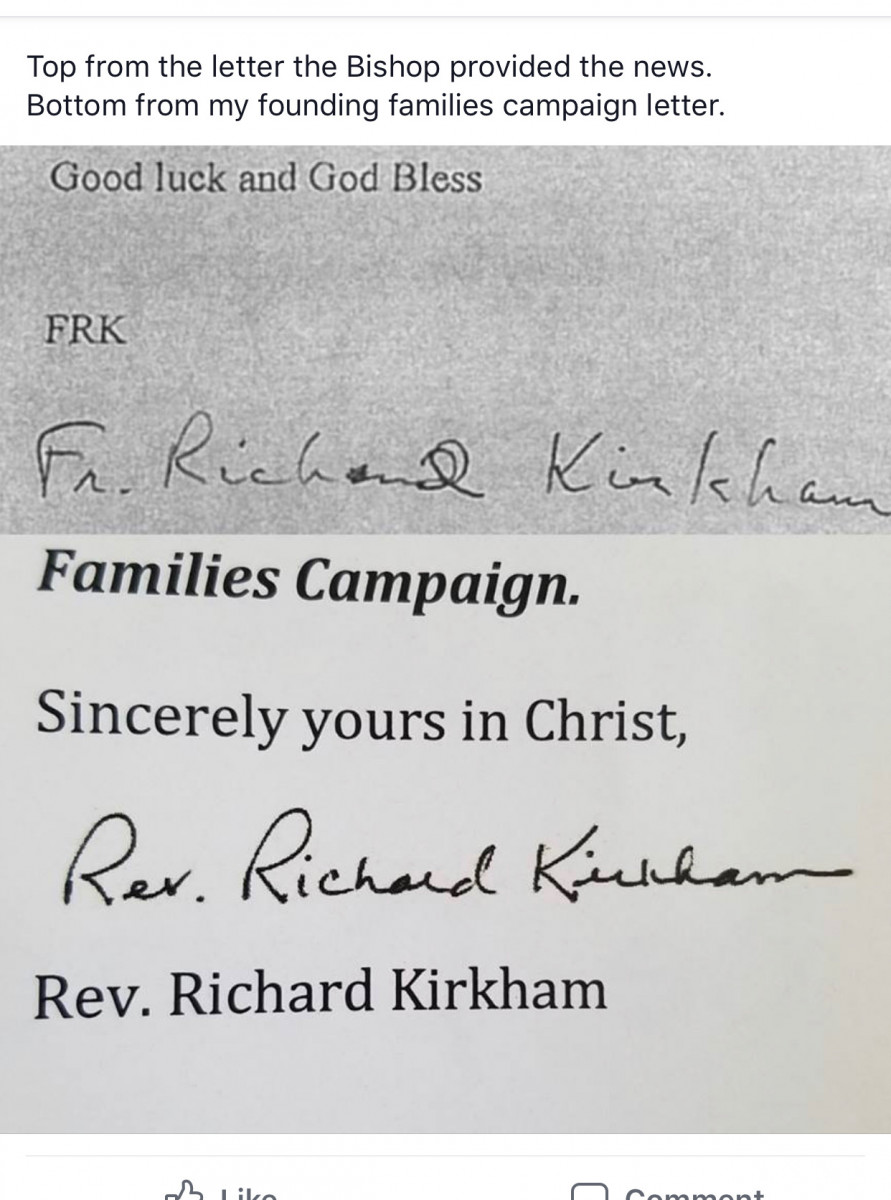 The signature is a "small piece of the puzzle," Walsh said, but shows "someone is acting in bad faith."

While Kirkham has retained a canon lawyer, Walsh said, he has no interest in suing the Catholic Church in civil court, with Walsh saying Kirkham "loves the Catholic Church" and "loves being a priest," and only hopes to be reinstated as a priest through the canonical process.

Walsh called Olson's treatment of Kirkham "disconcerting," saying he is "really a good priest" whom people "love," and that he does not believe Olson has treated Kirkham fairly.

Walsh also claimed Olson refuses to discuss the situation when approached by lay faithful. He referred to a signed affidavit by St. Martin's parishioner Deborah Krivacek, which states Olson became "very angry" with her when she confronted him after Mass at St. Martin's on June 30 regarding Kirkham's removal, and that he told her, "I AM the shepherd; you are just a sheep" (emphasis original). The affidavit also claims that Olson "repeatedly" called Krivacek "a nasty woman" as she walked away.

Another signed affidavit by Marilyn League, also a parishioner, supported Krivacek's claim, saying Olson was "yelling, very angrily" at Krivacek, his face "beet red." The "look of anger on his face scared" her. According to League's affidavit, Olson also called Krivacek "an evil woman."

If Kirkham had turned a blind eye to the Dallas priest's misconduct, 'he would still be the pastor of St. Martin's.'

Walsh told Church Militant in an email that if Kirkham had turned a blind eye to the Dallas priest's misconduct, "he would still be the pastor of St. Martin's." The message Olson has sent, he wrote, is that Kirkham "should never have sought to redress the sexual misdeeds of this priest," calling the choice to do so "a huge mistake."

"It cost him his parish. It cost him his right to be a priest. And it may prevent him from ever being an active priest again," Walsh said. "That is a lot to endure for sending a letter to another priest about his immoral actions." 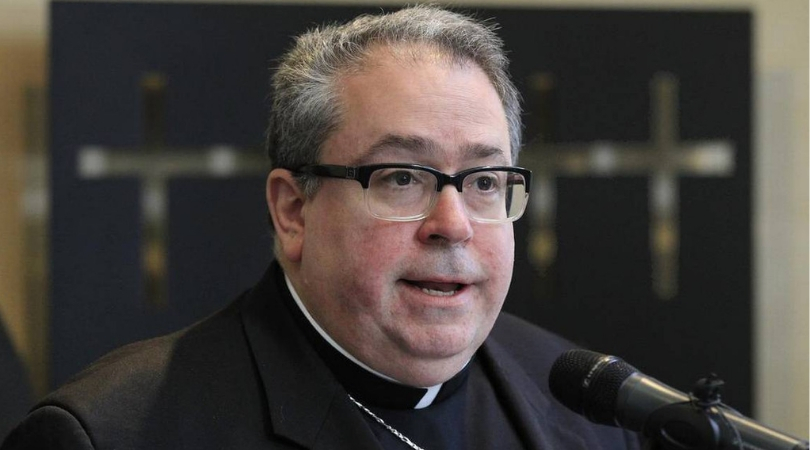