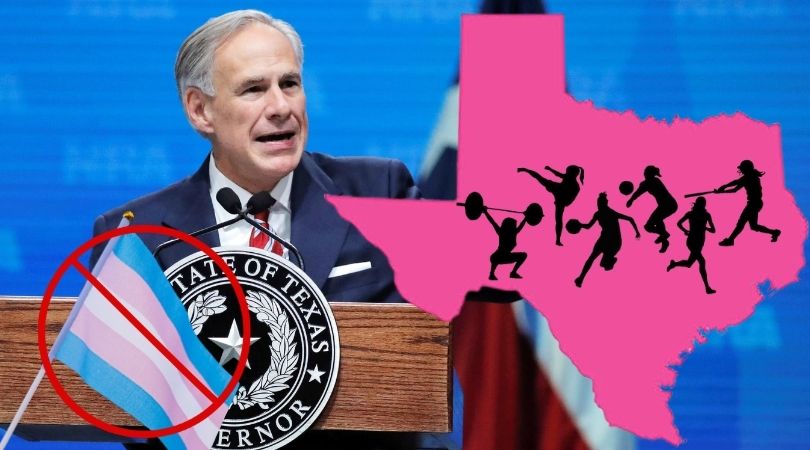 Legislators in the Lone Star State have passed House Bill 25, "The Save Women's Sports Bill," protecting girls and young women from having to compete with biological males in K–12 sports. The Catholic governor of Texas, Greg Abbott, a Republican, is likely to sign the bill into law.

The Texas law is just the latest move in the culture war over so-called transgender students in sports. The law is being hailed by parents and female athletes, and excoriated by leftists at the White House.

Greg Abbott is likely to sign the bill into law.

"Our message to young transgender people in Texas and across the country: these hateful bills are bullying disguised as legislation," Hill tweeted, promising that Joe Biden's administration "will always keep fighting for the full equality LGBTQ+ folks deserve."

Our message to young transgender people in Texas and across the country: these hateful bills are bullying disguised as legislation, and @POTUS and our Administration will always keep fighting for the full equality LGBTQ+ folks deserve. #YallMeansAll https://t.co/bpb1UwI1KL

The bill, which was approved in a third special legislative session in Austin Monday, is designed to prevent biological males from infiltrating all-female teams and sporting events. It will enforce sex segregation in sports according to the sex on the athletes' birth certificates (as opposed to the gender they choose to identify with).

Republican state representative Valoree Swanson, who authored the bill, sees it simply as a matter of justice.

"This is all about girls and protecting them in our UIL sports," said Swanson Thursday in a debate on the House floor, referring to the University Interscholastic League, which provides leadership and guidance for public school debates. "We need a statewide level playing field. It's very important that we, who got elected to be here, protect our girls," she added.

According to the National Law Review, the stated purpose of HB 25 was to remedy past discrimination for girls who historically were denied sufficient interscholastic athletic opportunities because:

White House press secretary Jen Psaki chose not to get involved in the public debate. When asked about what the Biden administration may do to combat the new Texas legislation, she deferred to the Justice Department, noting that "the president's view is that transgender rights are human rights, whether for adults or kids."

Texas has become the 10th state in the nation to enact a law protecting girls' sports from transgender ideology.

Recently, Texas has been in the national spotlight for its Heartbeat Law, which bans the killing of preborn children after their heartbeat can be detected — which usually occurs at around six weeks post-conception. The Biden administration is challenging the Heartbeat Law in court.