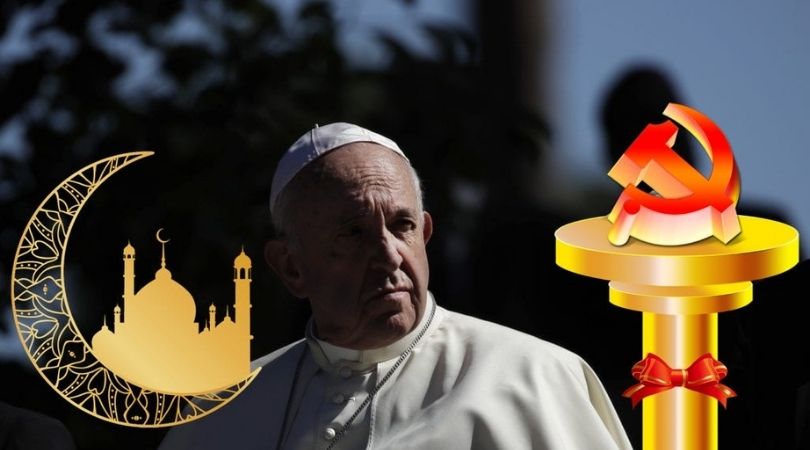 ROME (ChurchMilitant.com) - In an unprecedented move, faithful Catholics are calling for resistance against "the policies pursued by Pope Francis that threaten the West's integrity, security and cultural identities."

Lambasting the pontiff for orphaning the Christian West and favoring "those attacking the West with unparalleled intensity," Catholics on five continents from the Instituto Plinio Corrêa de Oliveira and its sister organization Tradition, Family, Property (TFP), are urging the faithful to "resist a pope who abandons the Christian West."

The seven-page manifesto, published Friday following the horrific jihadi massacre of Catholic worshippers in Nice's Notre-Dame Basilica, beseeches Catholics "to reaffirm their love for Western Christian civilization and their willingness to defend its remnants and culture."

"Until Pope Francis, the sovereign pontiffs recognized Western Christian civilization as the Church's firstborn daughter and sought to defend it," the manifesto explains.

The Church would be an "unnatural mother" if She turned Her back on this eldest child when the daughter was in danger of dying, or even worse, "helped Her enemies attack this firstborn until she perished."

However, "In the face of this apocalyptic scenario ... this is the attitude shown by many of our highest ecclesiastical authorities," the manifesto laments.

"You would think that the supreme authority of the Church would come out, in this supreme hour of crisis, in defense of Christian civilization when the family is being destroyed, a radical Islam is being installed in the West and the Chinese influence threatens our values and principles," Juan Miguel Montes, director of TFP, Rome, told Church Militant.

Until Pope Francis, the sovereign pontiffs recognized Western Christian civilization as the Church's firstborn daughter and sought to defend it.

"Well, what do we see? Exactly the contrary: Legal approval of homosexual unions, invitation to an indiscriminate Islamic immigration into Christian countries and sympathy towards China, accompanied by disdain and reproach of the West," Montes lamented.

"Do we have the right to resist such pastoral policies?" he asks. "Yes. St. Paul teaches us that there is a case for resistance."

"In this supreme hour of Christianity, the faithful would naturally lift their gaze to the Chair of Peter, the supreme authority of the Catholic Church, seeking a word of comfort and guidance. Instead of being the West's bulwark, however, the Holy See seems indifferent to its fate," the manifesto observes.

Titled "An Urgent Appeal to Resist the Betrayal and Ruin of the West, Flower of Christian Civilization," the declaration notes that despite the Church's universality, "Western Christian civilization has been the most visible and enduring fruit of the Church's apostolate."

But now, according to the document, the West is in the throes of a spiritual crisis, with "untold numbers abandoning the Faith and liv[ing] without God or His Law, no longer seeking God's grace and sacramental life."

Instead of being the West's bulwark, the Holy See seems indifferent to its fate.

The document proclaims that "Our moral decadence has weakened us, and we have forgotten our Christian roots." However, it adds that even more critical is "the parallel crisis within the Church [which] undermines our certainties, principles and values." The declaration underscores that "This spiritual crisis is far more destructive since it deprives us of the means that help us find solutions."

The document blasts the "hierarchy's passivity" during the Wuhan pandemic "when many religious authorities went beyond political ones, prohibited Masses and imposed Communion in the hand."

"For the first time in history, the Catholic clergy celebrated Easter without the faithful," it reads. "Many among the latter are not returning to Church, aggravating a growing apostasy."

Listing Pope Francis' recent attempt to undermine the foundation of the Faith, the document names the pontiff's endorsement of homosexual civil unions, open borders, uncontrolled invasion by Muslim migrants and submission of countries to international organizations like the United Nations.

Of special concern is the pope's pronouncements in his recent encyclical Fratelli Tutti, restricting "private property and the free market economy so extensively that, in practice, it denies the moral licitness of these two foundations of the Western economy."

The manifesto cites a 1974 document written by Prof. Plinio Corrêa de Oliveira during the reign of Pope Paul VI and the Vatican's policy of détente with communist regimes: "In this filial act, we say to the pastor of pastors: 'Our soul is yours, our life is yours. Order us to do whatever you wish. Only do not order us to do nothing in the face of the assailing red wolf. To this, our conscience is opposed.'"

The West's demise is not a foregone conclusion.

The document exhorts that to resist is "to denounce with filial and respectful frankness" Pope Francis' "endorsement of the legal recognition of homosexual unions — a death blow to what remains of Western Christian civilization" as well as "the privileged treatment accorded by the Holy See to Red China (whose communist regime it does not condemn)."

The faithful must also denounce "Pope Francis' disdain for the great countries of Europe and the Americas, for he mercilessly attacks their sovereignties and economic system based on free enterprise and private property," the manifesto states.

"The West's demise is not a foregone conclusion," the declaration insists. "When men resolve to cooperate with the grace of God, the marvels of history are worked: The conversion of the Roman Empire; the formation of the Middle Ages; [and] the reconquest of Spain, starting from Covadonga."

"These resurrections are invincible because nothing can defeat a people that is virtuous and truly loves God," it triumphantly concludes.