On average, since 1964, Black support for the Democratic presidential candidate has hovered at just under 90%.

In this week's Mic'd Up, Michael Voris interviews Dr. Alan Keyes, former presidential candidate and U.S. ambassador. Doctor Keyes ran for president in 1996, 2000 and 2008. In 2004, he also ran against Barack Obama for the U.S. Senate in Illinois.

Over the past five election cycles, the Republican presidential ticket has, on average, garnered the support of less than 8% of the black community. However, some polls now show that this demographic increasingly approves of Trump. Last year, the president's approval rating among blacks was more than 34%; more recently, Rasmussen Reports polled black voter approval at 45%.

Main concerns of black voters include the economy, health care and racial and ethnic inequality.

When Trump took office, the unemployment rate for blacks was at 7.5% and since then, it's been on a steady decline. In late 2019, black unemployment hit 5.4% — the lowest recorded level in U.S. history.

Not only does the abortion industry extinguish the American population, but it directly targets the black community at a higher rate than any other.

The report highlights a study from 2010 Census results: "79% of Planned Parenthood's surgical abortion facilities are strategically located within walking distance of African and/or Hispanic communities."

The majority of these Planned Parenthood locations are in black neighborhoods.

Every year Planned Parenthood increases its number of abortions, meaning that every year, more black babies are targeted for termination.

A 2008 report from Planned Parenthood's own research arm, Guttmacher Institute, revealed that: "In the United States, the abortion rate for black women is almost five times that for white women."

Every year Planned Parenthood increases its number of abortions, meaning that every year, more black babies are targeted for termination.

Likewise, in 2011, the Centers for Disease Control and Prevention released a report that revealed, "36% of all abortions were obtained by black women" — this, in spite of the fact that black women make up just 14% of the childbearing population.

On top of extinguishing the black population through abortion, the Democrats advocate for further breakdown of the family by promoting gay "marriage" and transgender ideology. The party also contributes to family disintegration by promoting Black Lives Matter; the Marxist group proclaims that as a key component of its philosophy, "We disrupt the Western-prescribed nuclear family structure."

A whopping 19.7 million U.S. children, more than 1 in 4, now live without a father in the home. Among blacks, the figure in 2018 stood at 65% — the highest of any race in America. In four out of every five of these single-parent families, it is the father who is absent. Children from fatherless families have a substantially greater risk of living in poverty, dropping out of high school, committing crime, going to prison, abusing drugs and alcohol and being obese.

Trump checks the box on addressing with blacks the economy, health care and race and ethnic inequality, while the Democrats have proven only to destroy the black community through abortion and the dismantling of the nuclear family. 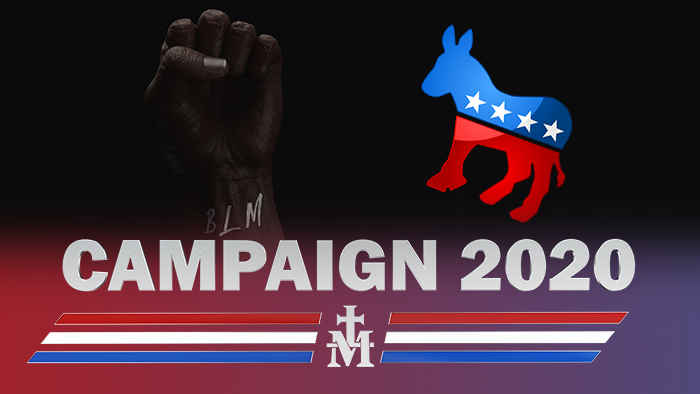