The Burrill Effect: Crisis in Clergy and Catholic Media

Episcopate may be forever changed

The Pillar's investigative reports on alleged serial sexual misconduct by Msgr. Jeffrey Burrill has set in motion a frenzy of highly placed clerics on the verge of falling in disgrace. Just days after the outing of Burrill, an announcement by the North American College (NAC) in Rome confirms that Washington, D.C. priest Fr. Adam Park abruptly relinquished his post as vice rector amid multiple allegations of sexual predation. While, at this point, the reports against Burrill center on alleged homosexual activities over a period of years, Park stands accused by multiple witnesses in New York's Supreme Court of serial acts of sexual harassment and other nonconsensual misconduct toward vulnerable seminarians under his authority.

The announcement that Park "will not be returning" to his position at America's seminary at the Vatican quickly followed reports by The Pillar that "analysis of commercially available signal data ... shows that ... at least 32 mobile devices emitted serially occurring hookup or dating app data signals from secured areas and buildings of the Vatican."

Park's sudden departure also comes after bombshell affidavits from a former special agent in charge (SAC) of the Federal Bureau of Investigation (FBI) and a subject of Park's sexual misconduct revealed that Cdl. Timothy Dolan; the NAC rector, Fr. Peter Harman; the NAC board of governors; as well as Vatican and other Church officials had received over the course of two years and refused to investigate numerous reports of Park's alleged predatory behavior.

Are you kidding? He's sleeping with half the faculty and a number of students.

The long-existing problem of homosexual predation and misconduct at the NAC is supported by findings of Dr. Joseph Barone, a New Jersey psychiatrist and AIDS expert who set up an underground AIDS testing program at the NAC. Barone reported that of those he worked with at the NAC, "1 in 12 tested HIV-positive."

Interestingly, Park is not the first NAC official forced to resign after having been accused of homosexual predation. When another former NAC faculty member was sent home before the end of his five-year contract, his bishop told the clergy of the diocese that their brother priest's early return was due to a "drinking problem." This explanation was refuted by a young man who was visiting the NAC and, in response to inquiries if the priest in question might be gay, said he was told, "Are you kidding? He's sleeping with half the faculty and a number of students." After the priest's return to his diocese, he was also accused of abusing teenage boys and was only removed from ministry when the victims threatened to sue the diocese.

A number of Catholic media sources, angered that two of their fellow journalists had broken the Church's code of silence, published articles accusing The Pillar of being "unethical" and "homophobic." These same media outlets have not addressed the existence of retaliatory homosexual cultures that have taken over many seminaries. For instance, both Catholic News Agency (CNA) and Catholic News Service (CNS) received sharp criticism for one-sided reporting, blatant omission of facts and other inaccuracies in their February 2021 articles on former seminarian Anthony Gorgia's lawsuit against Cdl. Dolan and NAC officials. The lawsuit reveals numerous witnesses alleging predatory behavior by Park and graphic homosexual misconduct by Harman in the presence of seminarians, as well as a massive cover-up by Dolan, the NAC Board of Governors and scores of other prelates.

With rising numbers of homosexual bishops and amid findings that four out of five clerics working at the Vatican and more than three out of five U.S. priests are homosexuals, Church leaders and their media lackeys have resorted to unprecedented and even unethical steps to cover up the extent of homosexual misconduct prevalent in seminaries today. Religious and secular readers alike have demanded to know why many Catholic media agencies are covering up one of the largest present-day sexual predation scandals, which has caused the Church to hemorrhage holy vocations.

The report states that Brockhaus, on behalf of CNA, initiated unauthorized "ex parte" contact with the office of the presiding judge in Gorgia's case without the knowledge of Gorgia and his attorney, in a brazen effort to recruit the judge into discussing the ongoing legal proceedings. Just as the Argentinian court upheld Grassi's conviction in spite of Bergoglio's attempted influence, so too did the New York state court decline to communicate with Brockhaus.

Despite efforts on the part of prelates and many Catholic media sources to downplay or cover up Church officials' liability for the conduct of clerics like Burrill and Park, they cannot refute a study by homosexual activists Karla Jay and Allen Young showing how "73% of homosexuals surveyed at some time had sex with boys 16 to 19 years of age or younger."

Over 30 implicated U.S. and Vatican bishops may be next to suffer the same fate.

While bishops have attempted to convince their flocks that allowing accused priests to continue to serve in ministry does not endanger minors or vulnerable adults, such was not the case with Washington, D.C. priest and Navy chaplain Fr. John Lee. After Lee's archbishop failed to investigate a report dated May 6, 2002 accusing him of having a "live-in boyfriend," Lee was arrested in 2007 for conduct unbecoming an officer, sodomy, aggravated assault and failure to inform sex partners that he was HIV positive. Lee was released after serving two years in prison only to be arrested again and sentenced in 2017 to 30 years behind bars for soliciting teenagers to send him sexually explicit images of themselves.

The implications of the respective falls of Burrill and Park extend far beyond these two accused former NAC faculty members. The fact that these two clerics were allowed to rise to power in the Church may be seen as an indictment upon Church leaders and media outlets who chose to look the other way.

Will the NAC rector, Fr. Harman, himself accused of sexual misconduct involving seminarians, be next to be shown the door for ignoring reports against Park and using his position to retaliate against seminarians who objected to Park's misconduct? How can Cdl. Dolan and each bishop on the NAC board of governors account for evidence of their failure to investigate no less than seven reports of incriminating allegations against Harman and Park?

It also remains to be seen how Cdl. Wilton Gregory, Park's ordinary, and Bp. William Callahan, Burrill's ordinary and a member of the NAC board of governors, will deal with their sexually active gay priests. Over 30 implicated U.S. and Vatican bishops may be next to suffer the same fate as disgraced NAC board of governors member Bp. Michael Hoeppner, who was forced to resign for having "failed to observe applicable norms when presented with allegations of sexual abuse involving clergy."

With victimized seminarians and numerous other witnesses preparing to give damning testimony in court, the aftermath of Burrill and Park may well reshape the future of the U.S. episcopate and Catholic media.

Anyone wishing to support the "Save Our Seminarians" cause in the effort to apply legal protections to seminarians is encouraged to contribute.

Gene Thomas Gomulka is a victims abuse advocate, investigative reporter and retired Navy captain/chaplain. A Catholic priest (monsignor) ordained for the Pennsylvania Altoona-Johnstown diocese, Gomulka was a victim of reprisals for confronting Church leaders who underreported and covered up abuse.
--- Campaign 32075 --- 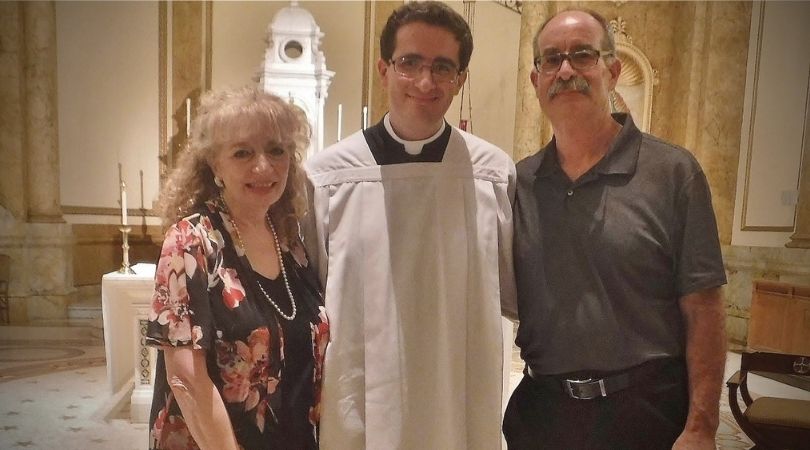