The Catholic Temperament of the Supreme Court Justices, Part II

Read Part I of this series here.

Chief Justice John G. Roberts has puzzled Catholics and non-Catholics alike since his appointment to the High Court, offering at times unexpected and seemingly contradictory rulings. He gave a hint of his later track record during his Senate confirmation hearings in 2005: When the panel asked about his approach to constitutional interpretation, Roberts replied simply, "[It's] my job to call balls and strikes, and not to pitch or bat."

He went on to elaborate his belief in the necessity of federal judges to respect the limits of their authority and not overstep their bounds, making policy when that role is properly reserved to the Legislature.

The Supreme Court has, throughout its history, on many occasions described the deference that is due to legislative judgments. ...

The determination of when deference to legislative policy judgments goes too far and becomes abdication of the judicial responsibility ... is properly called judicial activism; that is certainly the central dilemma of having an unelected ... undemocratic judiciary in a democratic republic. 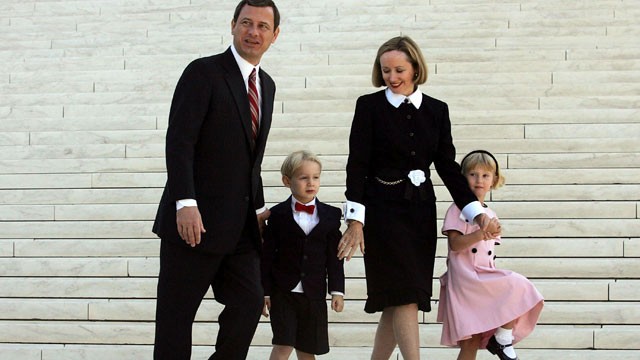 Roberts was raised in a faithful Catholic home, attending Mass regularly and serving as sacristan in high school. His parents enrolled him in an all-boys Catholic prep school, where he excelled in theology. His wife, from a devout Irish Catholic background, is a pro-life activist, serving for 12 years as legal counsel to Feminists for Life. Roberts himself authored a court brief in opposition to Roe v. Wade during his tenure as a lawyer under the Reagan administration. He and his wife attend and are active at Church of the Little Flower in Bethesda, Maryland, known for its orthodoxy. The parish priest, former attorney Msgr. Peter J. Vaghi, presided over the Roberts' wedding, and seems to be a close family friend (he's also good friends with Justices Scalia and Thomas). He's known for promoting teachings faithful to the Magisterium, including the necessity of chastity, as well as condemnation of contraception and abortion.

The Roberts have two adopted children — a choice they made in conformity with Church teaching that in vitro fertilization is wrong and not an option for faithful Catholics.

Originally nominated by George W. Bush to replace retiring justice Sandra Day O'Connor, Roberts was re-nominated to take the place of a man he once clerked for: Chief Justice William H. Rehnquist, who had unexpectedly passed away during Roberts' confirmation hearings. 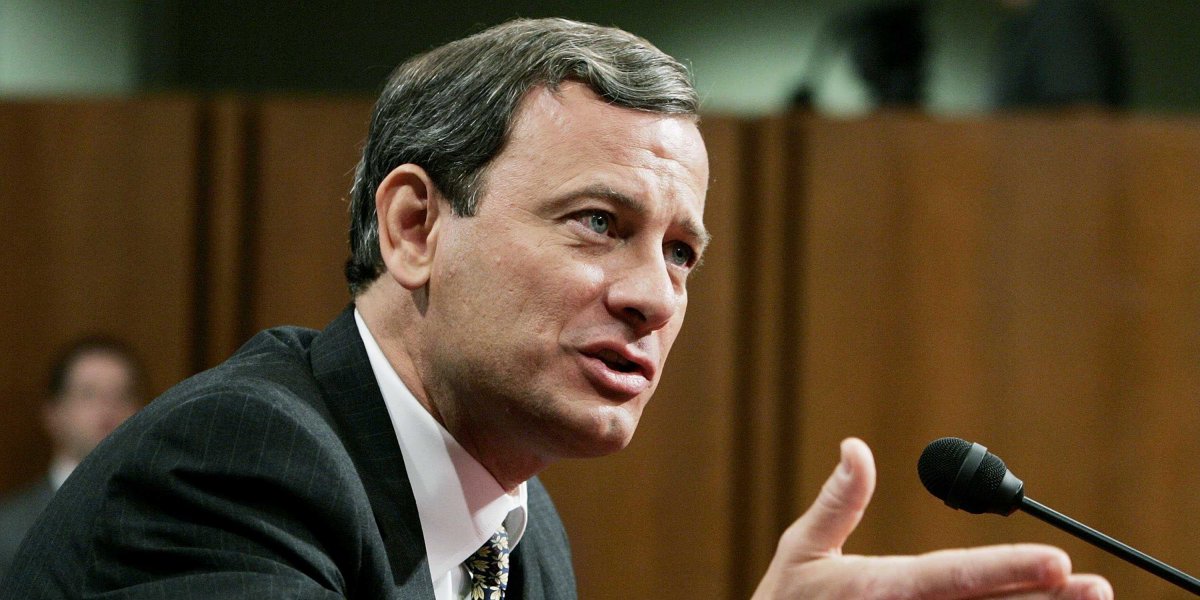 It was understood by conservatives that Roberts' toughest battle would involve questions on abortion, and that Democrats would use Roe v. Wade as a litmus test (as they have done in essentially every Supreme Court confirmation hearing since Robert Bork). This explains his restraint on the topic when pressed by various senators: With regard to Roe, he said it was "settled as precedent."

"There's nothing in my personal views based on faith or other sources that would prevent me from applying the precedent of the court faithfully under the principles of stare decisis."

Some pro-life critics were quick to mistake this claim as evidence of lack of concern for the unborn, when in fact Roberts was only offering his judicial philosophy, one that would give insight into his future voting record: He sincerely believes that as a judge, he has no authority to impose his personal beliefs (regardless of how strong) in his interpretation of the law. Impartiality and judicial restraint must rule the day, even if application of the law clashes with his Catholic, pro-life convictions.

Roberts never actually said he would uphold Roe; the legally savvy understood that couched within his seemingly offhand comments was the caveat that Roe is subject to stare decisis — the principle that cases must follow established Court precedent. In other words, his response was crafted in such a way as to reserve the right to overturn Roe if it conflicts with the entire body of case law — which, as fellow Catholic justice Scalia has repeatedly said, it most certainly does.

He caught conservatives by surprise when he joined the majority opinion in National Federation of Independent Business v. Sebelius, which upheld Congress' authority under its taxing powers to enact Obamacare. Key to understanding his decision, though, is this paragraph, which reinforces his consistently held belief in judicial restraint and respect for the will of the people as shown in the democratic process:

Our permissive reading of these powers is explained in part by a general reticence to invalidate the acts of the Nation's elected leaders. ... Members of this Court are vested with the authority to interpret the law; we possess neither the expertise nor the prerogative to make policy judgments. Those decisions are entrusted to our Nation's elected leaders, who can be thrown out of office if the people disagree with them. It is not our job to protect the people from the consequences of their political choices.

His same hesitancy to "invalidate the acts of the Nation's elected leaders" was again on display in King v. Burwell just handed down Thurday, which upheld subsidies under Obamacare. The case centered on how to interpret a clause in the Affordable Care Act; Roberts took a more permissive interpretation of the statute because it seemed the most consistent with the overall purpose and meaning of the Act — thus saving it. 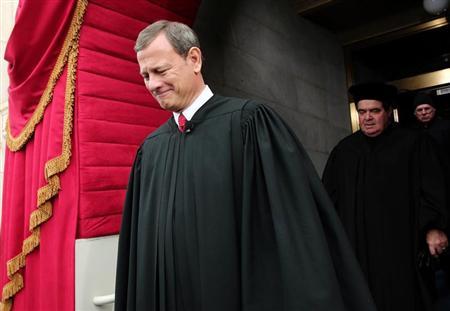 Roberts joined Scalia and two other Catholics, however, in dissenting in the gay "marriage" case handed down Friday. Although some have criticized his seemingly schizophrenic votes upholding Obamacare while voting against gay "marriage," Roberts' judicial philosophy once again is key to understanding his choices. Authoring the lead dissent, he wrote:

Whether same-sex marriage is a good idea should be of no concern to us. Under the Constitution, judges have power to say what the law is, not what it should be. ... The fundamental right to marry does not include a right to make a state change its definition of marriage.

In reasoning mirroring that of fellow dissenting justice Scalia, Roberts rejected the notion of "unelected and unaccountable" judges determining social policy for all 50 states in an area not reserved to the federal courts.

But Roberts is not without his critics, some who've said his approach forgets the forest for the trees. Professor Randy Barnett, law professor at Georgetown, criticized Roberts' dissent as being "all about restraint and only secondarily about correctness."

Natural Law jurists would agree, but on a different basis, arguing that Roberts' judicial philosophy, though humble and respectful of the democratic will, overlooks the larger point that no law that promotes evil can be upheld — even if passed by an elected majority — and that judges have a duty, grounded in natural law, to vote against such laws.

For instance, on the issue of abortion, Roberts and similar-minded jurists might reason that Roe must be overturned, not because abortion is intrinsically evil, but because the Constitution confers no explicit right to abortion, and this question should go back to the states, as it had before.

The Natural Law jurist would argue both: Not only does the Constitution confer no right to abortion, it actually prohibits abortion, via the very clause justices haved used to usher in this evil — the Fourteenth Amendment's Due Process Clause: "No State shall ... deprive any person of life, liberty, or property, without due process of law; nor deny to any person within its jurisdiction the equal protection of the laws."

There is evidence that at the time of the ratification of the Constitution, a general consensus existed in legal minds that the fetus was a person deserving full protection of the law. Although we can't get into this complex historical debate here, the Natural Law jurist would argue that even if no general consensus existed during the time of the Framers to shed light on the definition of personhood in the Fourteenth Amendment, Natural Law requires a reading of that clause consistent with its enduring and objective principles: A fetus is a person, and no State shall deprive that person of "life, liberty, or property, without due process of law; nor deny to any person within its jurisdiction the equal protection of the laws."

In Part III: A profile of Catholic justices Samuel Alito and Sonia Sotomayor.