The Devil in Detroit

A celebration of perversion

DETROIT, July 26, 2015 (ChurchMilitant.com) - ChurchMilitant.com was clandestinely on the scene at the unveiling of the satanic statue in Detroit Saturday. After discovering the location — an abandoned bank on the corner of Grand River and Warren in downtown Detroit — staff started arriving at the venue in the afternoon. We alerted police and local news stations, who sent squad cars and mobile television stations to monitor the event. 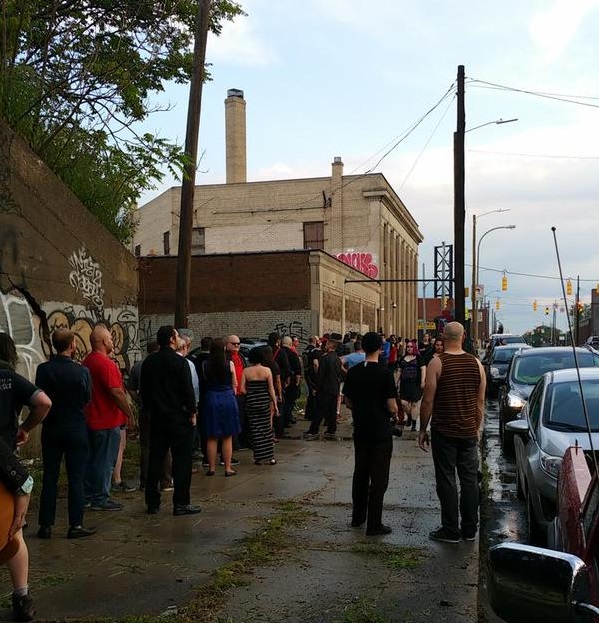 As evening wore on, greater numbers of ticketholders began to arrive, the line stretching down the block. President of the Detroit chapter Andrea Potti (a.k.a. Jex Blackmore) also made a brief showing.

We brought our six-foot bronze statue of St. Michael, who normally rests in our Abp. Fulton J. Sheen studio, as a counterwitness to the blasphemous goat-headed statue of Baphomet, meant to represent Satan. According to Scripture, St. Michael is the angel who did battle against Lucifer and cast him out of Heaven into the Abyss. 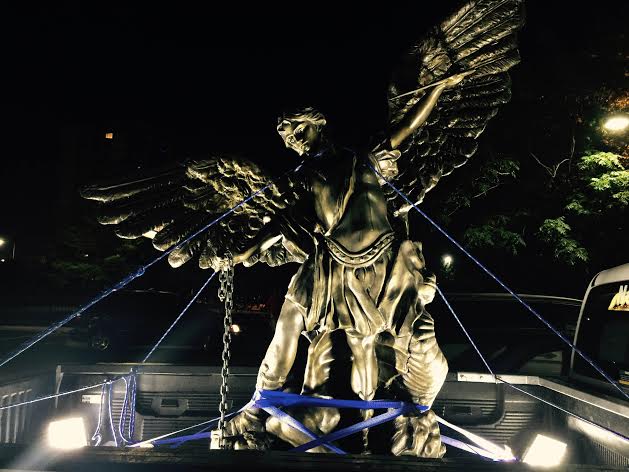 Staff were able to enter the building, and amidst the largely empty room observed a naked woman on a central platform, flanked by an obese naked couple on the floor.

But the original venue turned out to be a ruse.

On entry, ticketholders were instructed to drive to a parking lot on the corner of Chene and Franklin 15 minutes away, where a woman in a red scarf would check their tickets and direct them to the actual location: the Lauhoff Corporation building next to Chene Park in the Rivertown Warehouse District. Our crew found the location, and several of our staff gained entry into the building, where a loud party was in full swing.

An earlier downpour had come through the roof and flooded the dance floor, and approximately 100 people milled around the dark, smoke-filled room. As the rain ceased, more people trickled in, and towards midnight the number went up to about 400. On one side of the room stood an inverted red cross, and on the other the nine-foot-tall statue of Baphomet, covered in a white sheet. 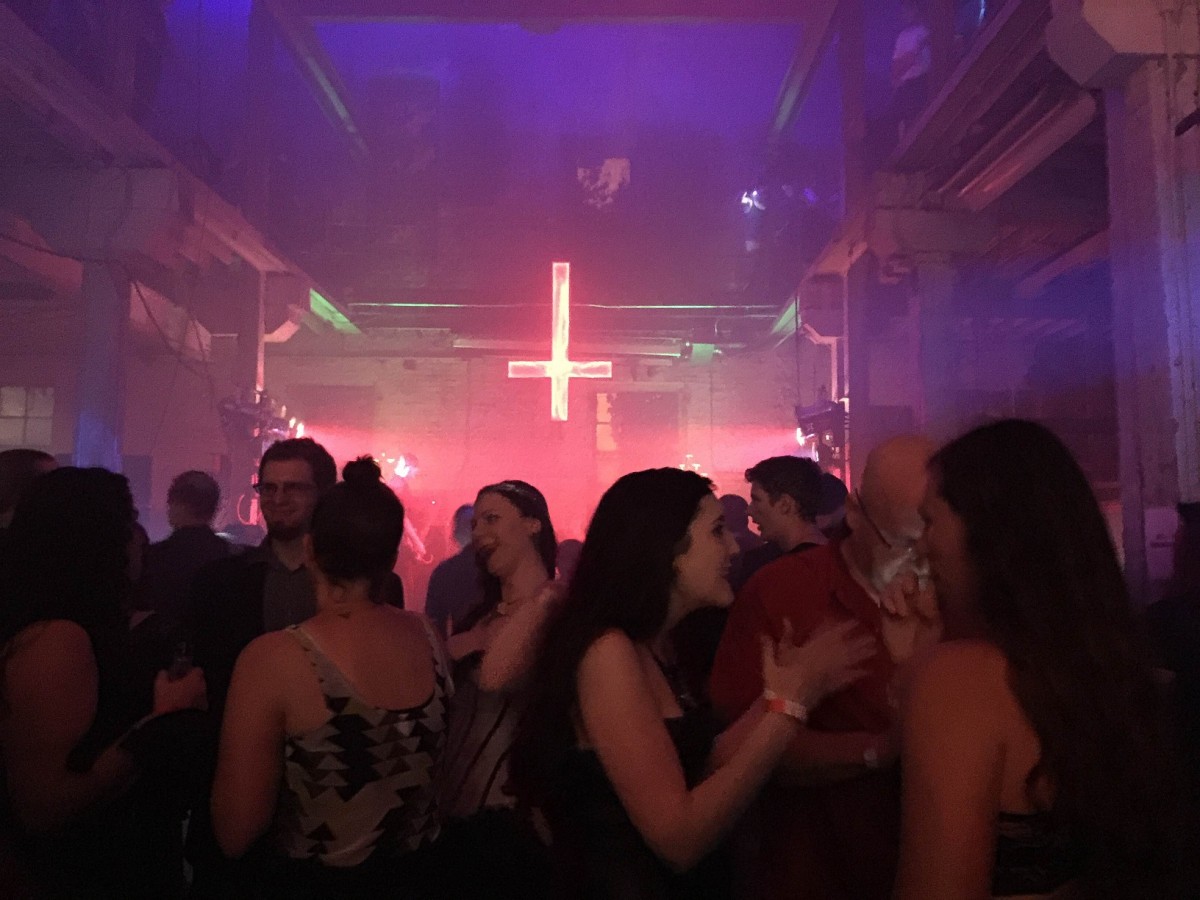 The organizers announced the unveiling would take place at 11 p.m., and ChurchMilitant.com obtained photographs of the event. 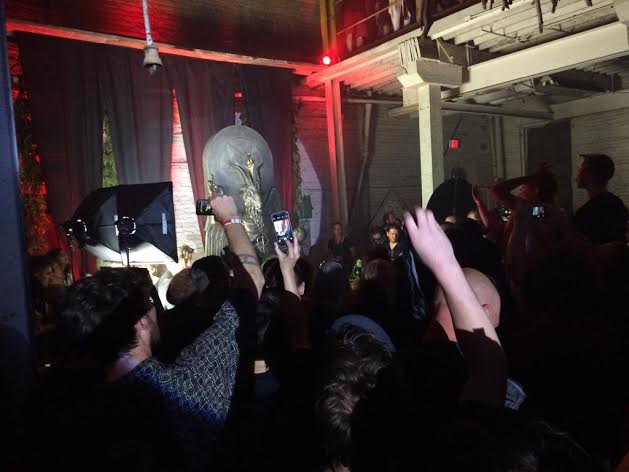 Before the unveiling, the announcer denounced the protestors who had shown up outside the original venue — in addition to ChurchMilitant.com's presence and our conspicuous six-foot-tall statue of St. Michael secured to a flatbed truck, two women were also present holding up a large banner with an image of the Blessed Virgin Mary.

At 11 p.m., two men in leather S&M attire grabbed each side of the sheet and yanked it off, to loud applause and shouting. The men then stood directly in front of the monument and began kissing lewdly while the crowd cheered, and afterwards a steady stream of VIP ticketholders — who had paid $75 for the chance to approach the statue — took turns sitting on Baphomet's lap while engaging in sexual groping, mostly homosexual in nature. 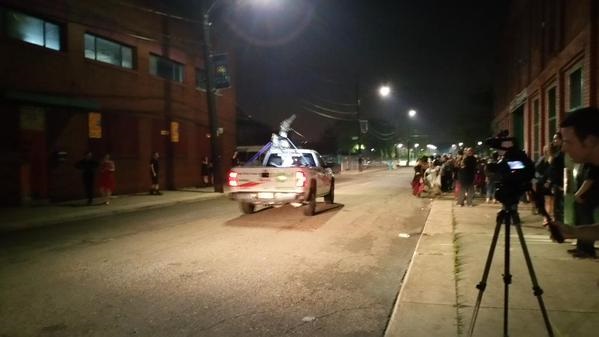 Outside, ChurchMilitant.com staff drove the St. Michael statue around the venue three times while reciting the St. Michael prayer. Some in the crowd outside jeered, and a dark grey SUV holding four men started following our truck on the second loop, staying on our tail for several minutes, parking nearby and watching us as we drove to a nearby parking lot. It continued to follow us as we headed back toward the venue, before driving past and leering at us, then driving off.

All the staff of ChurchMilitant.com returned to the studio safely.

Stay tuned for more video coverage of the Devil in Detroit.