The Download—German Bishops: No Money, No Mercy

Abp. Georg Gänswein is denouncing the Church in Germany for refusing sacraments to non-taxpaying Catholics

MUNICH (ChurchMilitant.com) - The secretary of Pope Francis is criticizing the German Church for, in effect, excommunicating Catholics who don't pay their "Church tax."

On their tax forms, all Germans, whether Catholic, Protestant, Jewish or nonaffiliated, must check a box designating their religious affiliation. When the box indicating their religion is marked, the German government automatically collects a special income tax which goes to whichever religious body is indicated on the tax form. If no religious affiliation is indicated then the person is not required to pay the tax.

If for whatever reason, a Catholic German citizen decides to stop paying this tax, they must uncheck the Catholic box on the tax form. Leaving it unchecked saves them money in Church taxes but then they wind up being barred from receiving the sacraments or a Catholic burial — in effect, excommunicated.

In an interview published Monday, Abp. Georg Gänswien, Prefect of the Papal Household and secretary to both Pope Emeritus Benedict XVI and Pope Francis, commented on the German Church tax.

"Yes, that is a serious problem," he said. "How does the Catholic Church in Germany react to someone leaving? By automatic expulsion from the community, in other words, excommunication! That is excessive, quite incomprehensible."

Because of this arrangement, the Church in Germany is by far the richest group of Catholics in the world. Just the diocese of Cloyne itself, has more assets than the Vatican. And the diocese of Munich/Freising, reportedly has over a billion dollars of actual cash on hand.

The interview with Abp. Gänswien comes in the wake of new statistics showing affiliation with the Catholic Church in Germany continues its downward spiral. A recent report reveals that for every one Catholic joining or returning to the Church, 68 leave.

This has been the trend in Germany for several years — meaning that the German Church is losing money as Catholics leave and stop paying the tax.

During the Synod of Bishops in 2014 and the Synod on the Family in 2015, the German bishops were notorious in pushing for Holy Communion for the divorced and civilly remarried, cohabiting couples and homosexual couples. Such proposals all flew under the banner of "mercy." Some speculate it's in the bishops' interests to be inclusive rather than teach orthodoxy on the matter of sexual morality, as it's more likely to keep the coffers full.

Archbishop Gänswein, a native of Germany questions this type of "false mercy" which is extended to people who don't practice their faith, but is not offered to those who choose to stop paying taxes to the Church. As he observes, "You can question dogma, no one is concerned about that, no one gets kicked out. Is the non-payment of the Church tax a bigger offense against the Faith than violations of the tenets of Faith?”

Watch the panel discuss these issues in "The Download—The German Church in Crisis." 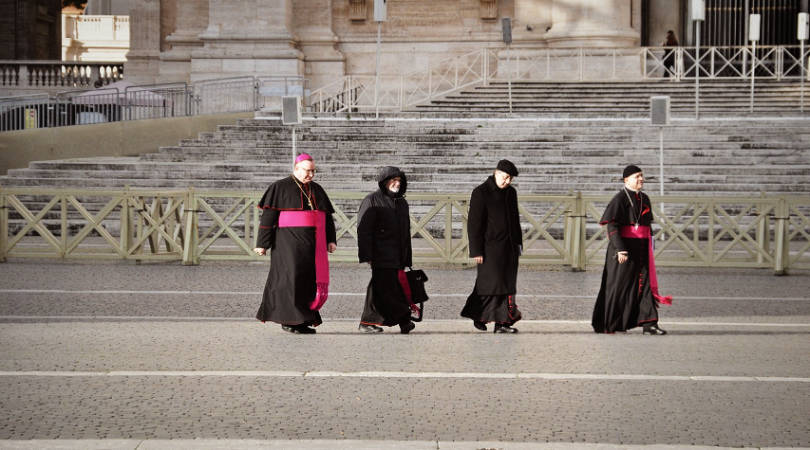