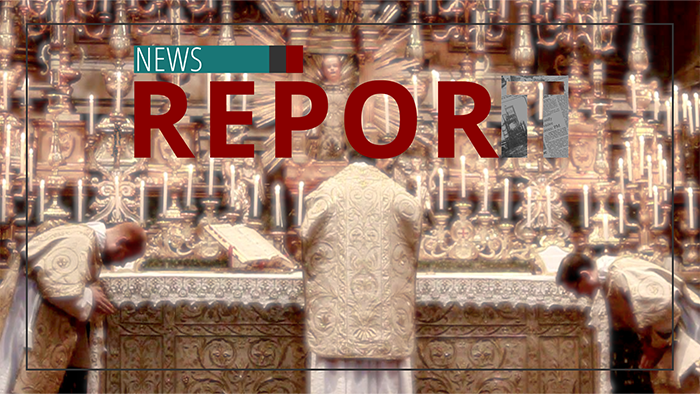 While some prelates joined Pope Francis' crackdown on the Traditional Latin Mass, or TLM, it doesn't seem to be as many as one might think. A first-of-its-kind survey of almost 5,000 TLM participants from coast to coast revealed some noteworthy trends in the burgeoning movement.

Church Militant's William Mahoney discusses the survey with the head of the group behind it.

Claudia Wert: "I think the Latin Mass kind of speaks for itself; its beauty and its eternal nature really are a natural draw to people."

Claudia Wert is the executive director of Christus Vincit Foundation, the organization that conducted the survey. Christus Vincit provides funding in matching grants worldwide for TLM parishes, projects and events.

Claudia Wert: "The best survey response we got was 'Being Catholic is one of the most important things about me/my family,' and 96.6% of people said 'yes, strongly agree.'"

In the wake of Pope Francis' crackdown on the TLM, episcopal reactions have been mixed. But roughly 20% of survey respondents noted strong support for TLM from their local ordinaries, while almost 30% noted at least some support.

Claudia Wert: "So that's a lot more optimistic, I think, than what we're hearing over social media because social media tends to amplify negative perceptions, but the reality is it's more evenly split than we had thought."

Based on this response and other conversations with Christus Vincit, it seems, after Traditiones Custodes, many bishops remain quietly supportive of the TLM.

Claudia Wert: "Most bishops were just like, 'OK, just continue what you're doing; it's status normal. You guys are the ones who are growing, so let's continue this trend. Until a direct order comes down, it's going to be situation normal.'"

We get this reputation for being an insular community, but for a good majority of people, their friends don't also attend their specific parish, so we're very open; we're very diverse. As a community, we're interested in getting out there. ... So I think that's good because that means there's a lot of opportunity for growth; there's a lot of people that you could be reaching out to.

Respondents further revealed their tithing practices. While a little more than half do not directly support their local diocese, almost 90% do support their local TLM community. A little over half also support TLM apostolates such as the Priestly Fraternity of St. Peter and the Institute of Christ the King.

Claudia Wert: "When people are making those contributions to your parish, it might also be good to remember the apostolate that's making that all possible because they're the ones who are really providing the priests, providing the sacraments, building up the infrastructure."

As a sizable number of young families are raising their children in the TLM, it looks like the burgeoning movement is poised to continue indefinitely.

Christus Vincit Foundation was founded as a response to the book Christus Vincit: Christ's Triumph Over the Darkness of the Age by Bp. Athanasius Schneider. Bishop Schneider serves as the group's spiritual advisor.