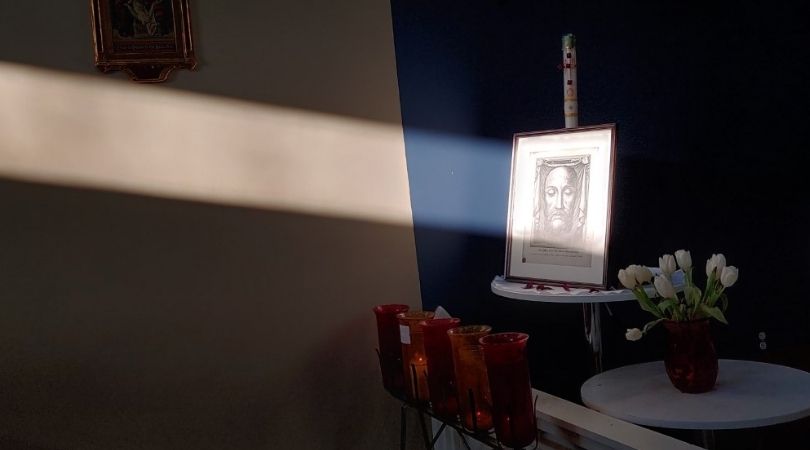 As we see the spiritual evils escalating throughout the world, one sure manner of making reparation is by devotion to Christ's Holy Face.

Adoration of the Holy Face of Our Crucified Lord goes back to that very first Good Friday when Our Lord and Savior was cruelly executed for humanity's redemption. It was then that one compassionate woman, a bystander along the road to Calvary, took it upon herself to wipe the sacred countenance of the world's ravaged Redeemer on his path to execution.

According to tradition, this woman was named Veronica. In Greek, the name "Veronica" means "bringer of victory." Some tie the Latin version of her name to a phrase meaning "true image."

Either understanding of the meaning of St. Veronica's name is appropriate for this tenderhearted woman. By following the inspiration of the Holy Spirit, she'd be forever known for having sacrificed her veil to wipe the blood and spittle from the face of humanity's suffering Redeemer. Our Lord, in turn, would gift her with the image of his ravaged Holy Face.

From the earliest days of the Catholic Church, Christians have reverenced the divine countenance of Our Crucified Lord as it was imprinted on Veronica's Veil. This image, showing Christ's anguish and pain, is a stark reminder that fallen human beings, instead of worshiping Jesus, cruelly executed him.

Because of the long passage of time and the early occupation of the Holy Land by Muslims, many gaps exist in the history of Veronica's Veil. But the continuous veneration of this holy artifact as a relic of Our Lord's Passion is perhaps as miraculous as was the original imprinting of Our Lord's Face on her veil.

Since the 12th century, there has been a renewal of devotion to the Passion of Our Lord and thus to His Holy Face. One man responsible for this renewed devotion was St. Francis of Assisi. Francis conformed himself so perfectly to Our Suffering Lord, that in his last days he was blessed with the Stigmata, a manifestation of the wounds of Christ.

As most Catholics know from their recitation of the Stations of the Cross during Lent, the Sixth Station recalls St. Veronica's tender cleansing of Our Lord's battered Face on His way to Calvary. The imprint left on Veronica's Veil recalls the image of the Suffering Servant, who Isaiah prophesied centuries earlier would redeem Israel:

[Christ was like] one from whom you turn your face, spurned, and we held Him in no esteem. Yet it was our pain that He bore, our sufferings He endured. We thought of Him as stricken, struck down by God and afflicted. But He was pierced for our sins, crushed for our iniquity. He bore the punishment that makes us whole; by His wounds we were healed.

Of all the paradoxes of our Faith, the "foolishness" of the Cross, as St. Paul describes it in 1 Corinthians 1:18–19, is a door for understanding God's gift of redemption in his Son Jesus. This so-called foolishness is the portal to help us grasp the depth of Jesus' love shown in the cruel death he suffered as man for fallen mankind.

Christ's anguish and pain is a stark reminder that fallen human beings, instead of worshiping Jesus, cruelly executed him.

One of the greatest works St. Francis accomplished during his lifetime was to focus the faithful's devotion upon the Lord's poverty and suffering. He facilitated this first by his example of living a life of poverty and second through his preaching. After Francis' death, his friars promoted his heartfelt devotion to the Stations of the Cross. This devotion commemorated Jesus' suffering on the road to Calvary.

A famous spiritual son of the saint, who lived in the 17th century, was St. Leonard of Port Maurice. Saint Leonard was principally responsible for popularizing the Stations of the Cross. During Leonard's lifetime in Italy, he was credited with erecting 571 Stations, one within the very ruins of Rome's ancient Colosseum. Each year during Lent, the pope officiates at these Stations in the Colosseum.

Mic'd Up Report: The Holy Face of Jesus

Devotion to the Holy Face would even become a spiritual weapon used by popes to combat errant philosophies arising in the post-enlightened world. In the aftermath of the American and French revolutions, philosophies contrary to the Faith came to be commonly held by many worldwide. These philosophies had dramatic effects on both civil society and on the Church Herself.

Pope Pius IX — during his long pontificate, from 1846 through 1878 — would witness firsthand the rise of numerous irreligious ideologies. He even suffered the Papal States being ripped away from control of the Church. Perhaps the worst of these ideologies in Pius IX's extended papacy was communism. This evil ideology gained notoriety with Karl Marx's 1848 publication The Communist Manifesto. On a philosophical level, Pius IX confronted head-on this atheistic ideology with the publication of his 1864 encyclical Syllabus of Errors.

As a spiritual shepherd of the Church, Pius IX also led his flock with a renewed devotion to the Holy Face of Jesus. In the winter of 1849, Pius IX ordered all the Churches in Rome to pray for God's intervention for the Papal States, which were in danger of being removed from his jurisdiction.

Today, more than ever, the ancient devotion to the sacred image of Jesus' Holy Face is needed.

During this time of fervent prayer, Pius IX had Veronica's Veil displayed in St. Peter's Basilica. On the third day of prayers, those present in the Basilica witnessed the apparition of Christ's bloody and bruised face as it was during His Passion. This image of the Divine Face appeared immediately in front of the raised reliquary containing Veronica's Veil.

In 1849, a copy of this very image promoted by the pope was sent to a Carmelite Monastery in Tours, France. One of the sisters of the convent, Sr. Mary of St. Peter, had previously experienced numerous visions of Our Lord during her short life. A constant theme in these visions was for the faithful to offer due reverence to the Holy Face of the Lord as atonement for the blasphemies and sacrileges committed throughout the world. Although Sr. Mary had passed in July 1848, the superior of the Carmel at Tours and the monastery's principal benefactor, Leo Dupont, saw in this new rendition of the Holy Face a divine confirmation of Sr. Mary's visions.

One of the most important visions Sr. Mary received occurred on the Feast of St. Louis King of France in 1843. During this apparition, Our Lord dictated what He called the "Golden Arrow" prayer for the faithful to recite in combating the many blasphemies and sacrileges committed throughout the world:

May the most holy, most sacred, most adorable, most incomprehensible, and ineffable Name of God be forever praised, blessed, adored, loved and glorified in Heaven, on earth and under the earth by all the creatures of God and by the Sacred Heart of Our Lord Jesus Christ in the Most Holy Sacrament of the Altar. Amen.

Over his lifetime, Dupont promoted Our Lord's message to Sr. Mary for increasing devotion to the Holy Face. Dupont accomplished this by setting up a chapel in his home at Tours for the faithful to venerate the icon of the Holy Face. Up to our present day, this icon remains in Dupont's chapel and continues to draw the faithful in large numbers. Dupont in 1939 was declared venerable by the Holy See.

The Archconfraternity: Join the Devotion

In 1885, Pope Leo XIII officially established the Archconfraternity of the Holy Face. This devotion spread quickly throughout the world, with many Catholics taking up the call to offer prayers of reparation and atonement. One of the earliest families to enroll were the Martins — from whom came the soon-to-be-famous St. Thérèse of Lisieux. The Martins regularly offered prayers in adoration of the Holy Face as part of their routine devotions. Saint Thérèse, upon entering the Caramel at Lisieux, added to her name the descriptor "of the Holy Face of Jesus" to highlight the importance she had for this devotion.

During this same decade, in the 1880s, my own family joined this archconfraternity. My great-grandparents, Noel and Ludivine Couturier, signed up soon after they were married. They then taught these prayers of reparation to their children, one of whom was my grandfather. The certified image of the Holy Face that my great-grandparents had obtained in the 1880s, now very old and yellowed, is still venerated by my family.

This image, although quite old, is still a visual reminder of the strong faith of my forefathers. It also calls to mind the importance of offering daily prayers of reparation for the grievous sins of blasphemy and sacrilege committed throughout the world.

In the days of my great-grandparents, things like skipping Sunday Mass and using God's most Holy Name in vain were understood as grievous sins. Today, the number and severity of sins and even blasphemies committed throughout the world have increased exponentially. My great-grandparents would be horrified by how commonplace blasphemy and sacrilege have become. They would be mortified by today's rainbow halos desecrating icons of the Blessed Mother and saints. They would be abashed by Catholic priests promoting homosexuality and gay marriage.

Today, more than ever, the ancient devotion to the sacred image of Jesus' Holy Face is needed. To help in this effort, consider joining the Archconfraternity of the Holy Face. You'll obtain a certified image of the Holy Face to enshrine in your home. The image would help you commit yourself and your family to offer up daily atonements for the numerous blasphemies and sacrileges committed throughout the world.

Pope Leo XIII in 1885 saw the urgent need to make prayers of reparation. Now, even more so, prayers of atonement need to be offered. Reversing the tidal wave of atheism and perversity is within our grasp. For our generation, it begins with the devout worship of the bruised and bloody Redeemer Who gave his life to give us life. 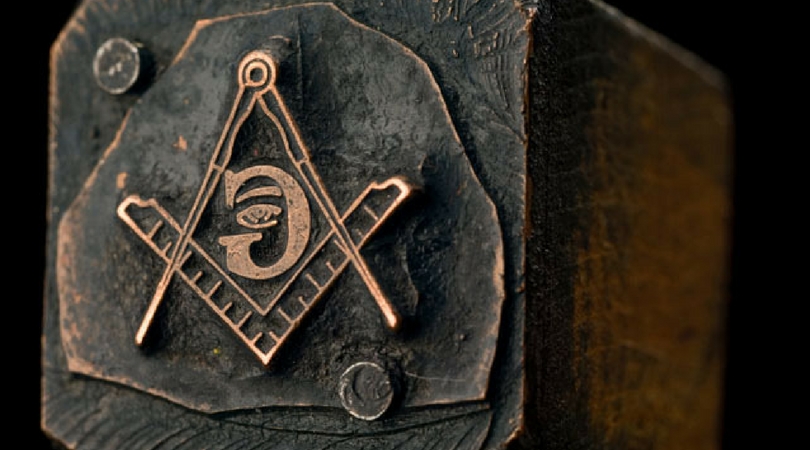