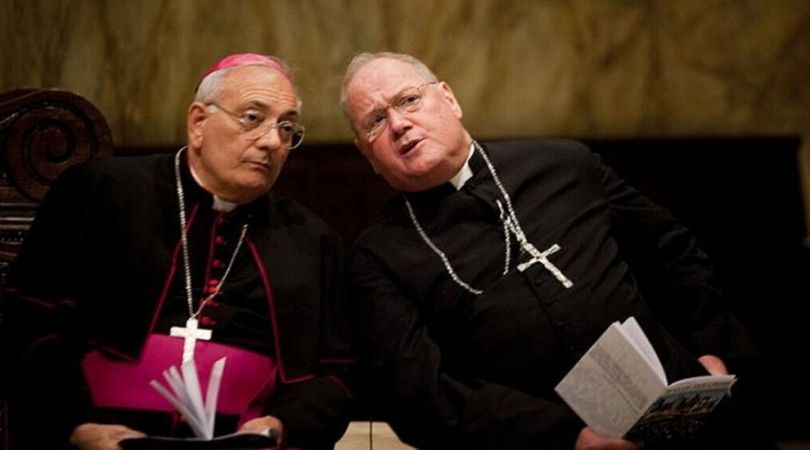 BROOKLYN, N.Y. (ChurchMilitant.com) - The tables have turned on the bishop who was assigned by Rome to investigate sex abuse cover-up in the Buffalo diocese; now he is the one being investigated.

The archdiocese of New York confirmed on Jan. 18 that Cdl. Timothy Dolan of New York has been asked by the Vatican's Congregation for the Doctrine of the Faith to investigate allegations of sex abuse lobbed against Brooklyn Bp. Nicholas DiMarzio.

It is just the second such investigation being conducted under the new norms of Vos Estis Lux Mundi, Pope Francis' 2019 motu proprio that provides new mechanisms for handling accusations against bishops.

Joe Zwilling, spokesman for the archdiocese of New York, said in a statement:

As directed by Vos Estis, Cdl. Dolan earlier notified the Holy See of the allegation that was raised concerning Bp. DiMarzio from his time as a priest in the archdiocese of Newark. On Jan. 7, 2020, the cardinal (Dolan) received instruction from the Congregation for the Doctrine of the Faith that he is to begin an investigation. As is our practice, the cardinal will rely on outside professional forensic investigators to assist him in this matter.

Because Vos Estis Lux Mundi does not require a bishop under investigation to step aside during the preliminary inquiry, DiMarzio's status as of now has not changed.

In a statement released on Jan. 19, the diocese of Brooklyn said DiMarzio had done nothing wrong and had no intention of stepping aside during the Vatican-ordered inquiry.

"Bishop Nicholas DiMarzio has categorically denied the allegation against him. He will vigorously defend himself against this false claim and is confident the truth will prevail," the statement said.

A Brooklyn diocesan spokesman added that DiMarzio "looks forward to the investigation of the allegation made against him and having his good name cleared and restored."

The allegations date back to the 1970s when DiMarzio was a priest for the archdiocese of Newark. Fifty-six-year-old Mark Matzek claims that DiMarzio and another priest, now deceased, abused him repeatedly when he was an altar boy at St. Nicholas Catholic Church.

According to the diocese, the Brooklyn chancery has been inundated with messages of solidarity ever since the allegations were made public two months ago.

He will vigorously defend himself against this false claim and is confident the truth will prevail.

"There has been a tremendous outpouring of support for Bp. DiMarzio, from here in the diocese of Brooklyn and from the people he has served throughout his 50-year ministry, including parishioners from his time as parochial vicar at St. Nicholas Church in Jersey City," the statement said.

A spokesman for the bishop focused on DiMarzio's reputation and competence, stating that he is "recognized as a leader" in combating sexual abuse within the Church.

"Even before the mandates of the 2002 Charter for the Protection of Children and Young People," the spokesman noted, "Bishop DiMarzio created protocols when he was the bishop in the diocese of Camden from 1999–2003 to ensure that children were protected and that victims received the care they need."

About his recent work investigating abuse charges, the spokesman added, "His record in fighting sexual abuse is further evident in Pope Francis' recent selection of him to conduct [this] investigation into the diocese of Buffalo."

DiMarzio had been chosen to investigate the diocese of Buffalo and all its troubles, which in December resulted in Bp. Richard Malone's stepping down.

Before Matzek's allegation surfaced, the first U.S. bishop to be investigated under Vos Estis Lux Mundi was Bp. Michael Hoeppner of Crookston, Minnesota, alleged to have knowingly kept an abusive priest in ministry.

On Sunday, a demonstration of several advocates and victims of sexual abuse gathered outside St. Patrick's Cathedral demanding DiMarzio step down as bishop of the Brooklyn diocese while the claim is being investigated.