The Pan-Amazon Synod: A Threat to Priestly Celibacy? 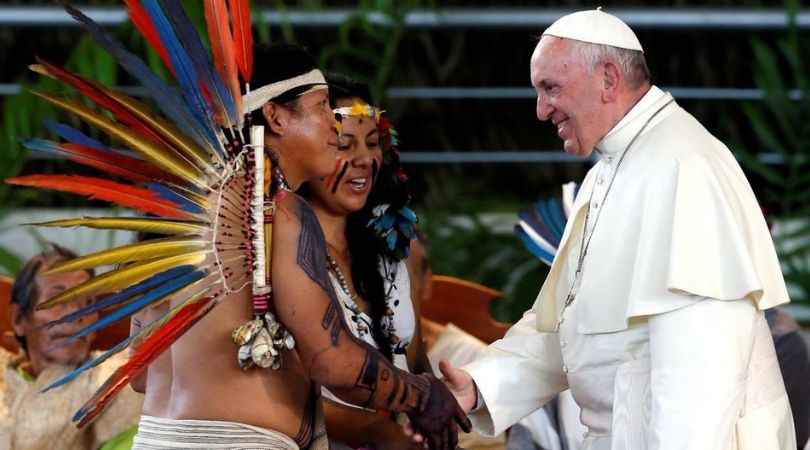 On Oct. 15, 2017, Pope Francis announced the Synod for the Amazon to be held in Rome this October. The Holy Father stated that "new ways of evangelization," especially among the Amazon indigenous peoples, should be one of its main goals — and it's becoming increasingly clear that among these "new ways" is the possibility of opening up the priesthood to married men.

Some points of the synod preparatory document are worth noting: the so-called "Indian theology" and the emphasis on ecology. The document mentions "new ways of evangelization" and the need to "rethink the ministries that are necessary today to respond to the objectives of a church with the face of the Amazon and the face of the indigenous people."

Also, it stresses the need to "identify the kind of official ministry that could be conferred to women." It also says that it is necessary to rethink new ways to give the Amazon people frequent access to the Eucharist.

This could mean that the decisions made in the synod could apply not only to the Amazon region but to the whole of the Catholic Church.

Brazilian secular media is already reporting that the ordination of married men to priesthood and the possibility of ordination of women to "official ministries" are main goals of the upcoming synod. The lack of vocations and priests and the absence of regular celebration of Masses in many regions of the Amazon forest are appointed as reasons to the permission of such ordinations.

Pope Francis himself, in a 2017 interview to German newspaper Die Zeit, said that the viri probati were a possibility. Viri probati, or "tested men," are married men with mature faith that could be extraordinarily admitted to the priesthood.

Erwin Krauter, bishop emeritus of the territorial prelature of Xingu, in the Amazon forest and current secretary of the Brazilian Bishops' Committee for the Amazon, has expressed himself to be in favor of not only the ordination of married men to the priesthood but also the ordination of women deacons and hopes these measures will be approved in the Amazon Synod.

Krauter, the Austrian-born prelate, quoted the proposal of another bishop, Fritz Lobinger, who advocates the ordination of married men and the existence of "councils of elders" on the communities where there is lack of priests.

These councils would be coordinated by a celibate priest. The Pope has also cited Lobinger before when talking about the possibility of ordaining married men. Another German bishop, Franz-Josef Overbeck, who defends changes in the Church teaching on homosexuality, said recently that the synod may cause "rupture" and "nothing will be as before" and that the role of women should be reconsidered.

Cardinal Cláudio Hummes, archbishop emeritus of São Paulo, the biggest archdiocese of Brazil, is another synod enthusiast. The Brazilian cardinal is the president of REPAM, the Intereclesial Pan-Amazonic Network.

He has recently released a book about the upcoming synod and was appointed relator general by Pope Francis. Hummes was at the balcony in St. Peter's Square when Pope Francis was elected and gave his first speech as pope.

Cardinal Hummes affirms that, since his election, Pope Francis wanted to hear the Amazon bishops. He also claims that the synod is for the entire Church and said the great events and reunions of the Church always bring advance to the whole Church. This could mean that the decisions made in the synod could apply not only to the Amazon region but to the whole of the Catholic Church.

Conservative Cdl. Robert Sarah, prefect of the Congregation for Divine Worship and the Discipline of the Sacraments, warned in a homily that the ordination of the married viri probati, would be a "breach with the Apostolic Tradition." The Guinean prelate said that to ordain married man for "pastoral reasons" would "establish a priesthood according to human criteria, but (we) would not continue the priesthood of Christ — obedient, poor and chaste."

In an interview with LifeSiteNews, he says that the ordination of married men is not the solution for priest shortages and that Brazilian Catholics would not ask for married priests and are "deeply aware of the sacredness of the priesthood." He remembers his youth in the Soviet Union where there was no Mass on Sunday, but the Faith was lived in the "domestic Church which is the family."

Questions like poverty, ecology and deforestation will be discussed in Rome this October, but the new kinds of ordination should be at the center of attention. If approved, it is hard to believe that both the ordination of married men and the ordination of women to the diaconate will remain as exceptions and will happen only in certain regions.

If the ordination of married men is approved as an exception for areas in the Amazon where there is a shortage of priests and no regular celebration of Masses, one can't help thinking about other "exceptions" that became the norm, such as Communion in the hand or the presence of "extraordinary" lay eucharistic ministers at Masses, among other novelties.

The Portuguese who arrived in Brazil in 1500 and were members of the Order of Christ brought the Catholic faith to the country. Brazil was then called Land of the Holy Cross, and the indigenous people in the country forests were evangelized without the need of married priests.

Jesuit priests, like Saint José de Anchieta, were not numerous, especially if compared to the extension of the territory, but were willing to give their lives — and many effectively gave — to announce the Gospel in these lands. They, together with religious from other congregations, built a Catholic country preaching the Gospel, converting the indigenous people and celebrating the sacraments in the wilderness. They relied on Christ and His Church, and that was enough.

Perhaps it is time follow their example to solve the evangelization problems — not only in the Amazon but everywhere.

Alexandre Sandor is a Catholic husband and father from São Paulo, Brazil.