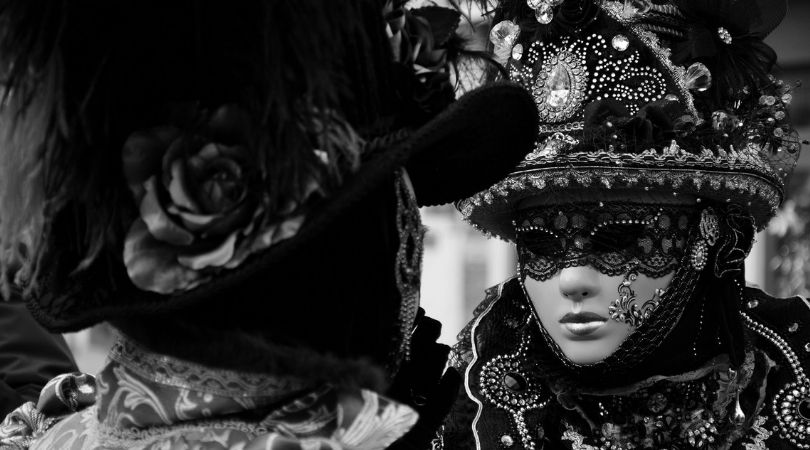 Xavier Forneret: 'During a carnival, men put masks over their masks'

For the Swiss psychiatrist Carl Jung, the persona mask was the pleasant social face the individual presented to the world, designed to make a definite impression upon others while concealing the true nature of that person's private desires and intentions.

A ski mask hides a hoodlum's identity so he can rob and maim at will. Then there's the more subtle charity mask worn by crafty officials who grandstand for generous social freebies that conceal their true vested interest: pursuing power and influence.

Consider the democratic socialists who would rob the community chest, then raise our taxes to distribute more free "bread and circuses" for arrogant illegal immigrants, safe needles for homeless, dead-beat drug addicts and child support for unwed prostitute mothers who game the system.

We comrades will become life-long slaves to a welfare system that cradles, feeds, shelters and buries us.

Their illegitimate kids without a father spoil into stay-at-home snowflake millennials who melt in the heat of the day and resort to media, gaming as nighttime zombies. Some despair to get on with their lives and go on mass killing sprees.

On top of all this, the extreme left progressives are proposing free "Medicare for All," guaranteed income, jobs for everyone regardless of merit, subsidized housing, free college tuition and free universal pre-school. This utopian la-la-land will all be free.

The squad of four preach an extreme brand of socialism, not far removed from communism, inviting illegals to enjoy lifelong dependency on their false government god.

Their basic message is: "Utopia is here and now in America. Come and see." So they have come by the millions, squatting for handouts in San Francisco, Los Angeles, New York, and in other large cities, defecating wherever they can and spreading typhoid, hepatitis A, HIV, gross disrespect of law officers and civil unrest. Europe has the same problems, even worse. It's much like the ancient barbarians getting past the gates of Rome and then sacking it.

Furthermore, this newly emerging proletariat must pledge future votes to their bourgeoisie benefactors — or lose their free-lunch handouts. We comrades will become life-long slaves to a welfare system that cradles, feeds, shelters and buries us. This vicious welfare cycle would get passed down from one generation to the next in a self-perpetuating syndrome.

The true hidden cost of all these freebies lies beyond an ever-increasing income tax and unjust wealth confiscation. Covert damage would take the form of lost motivation for financial achievement by the rich and the poor. Why work or operate a business or patent your ingenious invention when everything is free? The people become dull to any profit motivation and inimical to industrious capitalism.

Politicians masquerading as charitable are too willing to entice this horde of illegal immigrants who push for "entitlement." Consequently, we have a rabid flood of "asylum" illegals squatting here for utopia. Many adopt an arrogant attitude and can get violent competing for all those free "entitlements" earmarked for our legal citizenry.

When these illegals become documented citizens, the democratic socialist candidates will harvest more votes. Now they boldly motion against the Electoral College to remove the counterbalance to their stacking the popular vote.

Whatever happened to our tried and true immigration protocols, when it took five years learning our language, our customary civil and sanitary conduct? Teddy Roosevelt said it all: "We should insist that … the immigrant who comes here in good faith becomes an American and assimilates himself to us … in every facet American."

Note also how these corrupt politicians have put atheism planks into their political platform by removing "In God We Trust" from schools and Christian crosses from public places. Theirs is a blatant attempt to replace free will Christian charities with an atheistic welfare state, one that imposes high taxes for the supposedly equal distribution of goods and services.

Disregarding abortion, adultery, sodomy, addiction, contraception and euthanasia, they also ignore the ancient Christian work ethic: "If anyone is unwilling to work, let him not eat" (2 Thess. 3:10).

Catholic politicians and political bishops all wear the same mask of charity in their masquerade of hiding an inordinate desire for power and influence. In a mirror, they see a pleasant social face, unaware of the masked desperado lurking beneath.

Catholic politicians and political bishops all wear the same mask of charity in their masquerade of hiding an inordinate desire for power and influence.

The bishops dare not excommunicate Catholic politicians who might influence those in Congress sitting on key committees who can stop financial grants to charitable NGOs or who could take away the tax-free status of church income and property.

Victor Hugo in his novel Les Misérables defended his choice of the Catholic Bishop Myriel as a pure and lofty figure of the true priesthood. It was his most savage satire on the corrupt clergy of his day. His bishop's compassion and uncomplicated charity toward a homeless vagrant was to let the man eat and sleep in his house, knowing he might steal his silverware. After he stole it and the police arrested him, the bishop forgave him.

We do not see today's politicized bishops opening their mansions to the unwashed homeless: "Open homeless shelters, but not on untaxed diocesan property."

However, we hear their demands for politicians to legislate a complex web of charitable freebies for illegal immigrants who brazenly disregard the language, laws and customs of our land.

Our once-Christian nation is turning neo-communist. The distribution of wealth for charitable purposes is no longer voluntary but dictated by progressive tax rates.

Neither high-ranking politicians nor cardinals can leave their masquerade ball and remove their masks without admitting to the ugly hypocrisy lying beneath. Consequently, many of our elected Catholic politicians and ordained princes remain willfully ignorant of their own Judas betrayal of America's Judeo-Christian values.

I fear the end of America is near, that glorious nation we oldtimers knew and loved.

Pity America's youth despairing of God's habitual grace that once blessed this land.

Richard M. DellOrfano in his youth spent 10 years on a cross-country pilgrimage following Christ's instruction to minister without possessions and is now completing his autobiography: Path Perilous, My Search for God and the Miraculous. New Oxford Review anticipates his weekly blog essays in its Narthex website.