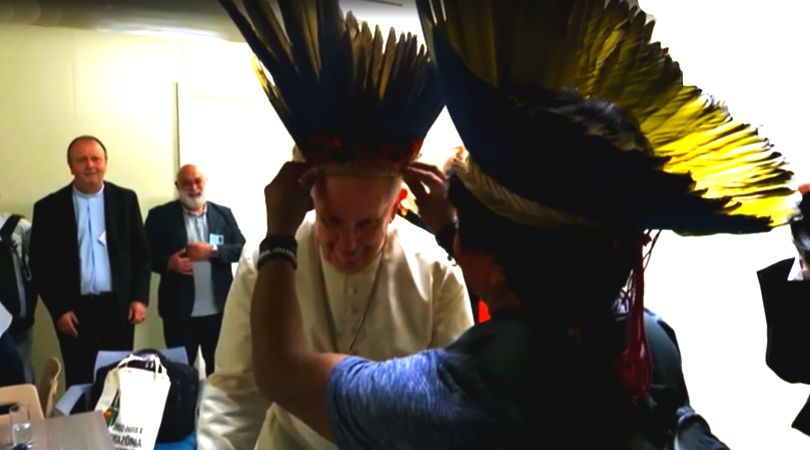 VATICAN CITY (ChurchMilitant.com) - Pope Francis met with indigenous people from the Amazon and warned against the dangers of "new forms of colonization."

Accompanied Thursday afternoon by Abp. Roque Paloschi of Porto Velho, Brazil and Cdl. Cláudio Hummes, general relator of the synod, the Pope met with a group of about 40 natives that included some participants of the Amazon Synod.

The group was singing songs in different indigenous languages such as Maragua as the Pope entered the room with the two prelates.

The group brought presents, signs and letters that the pope put in his bag made of natural fibers.

The meeting began with a man and a woman reading a short speech thanking the Pope for calling the Amazon Synod and asking him to help them realize their desire to guarantee a peaceful and happy life as well as protect their land and waters for their descendants.

Italian TV network TG2000 reported that the group "brought presents, signs and letters that the pope put in his bag made of natural fibers."

As the gift-giving came to an end, a member of the group placed an indigenous feather headdress on the pontiff's head while Francis smiled approvingly.

The Pope then spoke to those present, emphasizing how the Gospel is like a seed that falls to the earth and grows with the characteristics of the land where it falls.

With reference to the Amazon, the Holy Father warned against the dangers of new forms of colonization.

Pope Francis ended his presentation by talking about the origins of Christianity, which began in the Jewish world, developed in the Greek-Latin world and then reached other lands such as the Slavic, Eastern and American ones.

Based on these reflections, the Pope said that the Gospel must be inculturated since "peoples receive the message of Jesus with their own culture."

Journalist Ed Pentin asked Paloschi a question Thursday about how the Brazilian bishops and Catholic communities could accept money from the Ford Foundation, which sends millions of dollars towards promoting abortion and gender ideology.

He responded by saying that CIMI (the Brazilian Bishops' Conference Indigenous Missionary Council) is "transparent" and the information is available on the internet.

The Church must listen to the cry of the earth and that of the poor.

Hummes, whom the Pope chose personally to lead the synod, once summarized the controversial aspects being discussed by saying the Church "must listen to the cry of the earth and that of the poor."

It was reported Thursday that evidence suggests Hummes and other officials invited a communist group led by Deputy Helder Salomão of the Brazilian Workers' Party (BWP), a communist group. At the meeting, attended by several bishops, Jandira Feghali — a pro-abortion, pro-infanticide politician — delivered a document on human rights to synod leaders.