The Silence of the Shepherds

In pre-World War II Germany, most Protestant and Catholic Church leaders remained silent and failed to speak out against the truly non-Christian policies implemented by Adolf Hitler and the Nazis. Denouncing these fellow ministers and priests as vendors of "cheap grace," German Lutheran pastor and theologian Dietrich Bonhoeffer helped to found the Confessing Church, whose adherents refused to compromise their Christian beliefs even under threat of persecution and martyrdom.

Even though Adolf Hitler was baptized Catholic, he was honest enough to recognize that the policies he promoted clearly placed him outside the Church. Nowhere is it recorded that he presented himself as an adult for Communion. However, had he done so, it is safe to say there probably would have been German bishops and priests who would have administered the Eucharist to him. While Germany's bishops conference was forced to admit some 85 years later the embarrassment of their predecessors' complicity with evil, it appears the lessons of the past have not been learned by Rome and the U.S. episcopate.

When President Joe Biden met recently with Pope Francis, he left the closed-door meeting by telling Reuters that Pope Francis told him "to keep receiving Communion" despite his open support for abortion. Questioning this claim, Bp. José Ignacio Munilla of San Sebastián, Spain tweeted, "These incredible statements reveal the moral character of those who are capable of compromising and manipulating the pope with the intention of washing their conscience stained by the blood of so many innocent lives unjustly eliminated."

While Biden's statement appears to be a source of scandal, particularly for those who believe in the Catholic Church's teaching on the sanctity of human life from conception to natural death, many Catholics are also scandalized by the pope's silence and the Vatican's refusal to deny Biden's claim. In keeping with the legal maxim, Qui tacet consentire videtur ("Silence renders consent"), one would be led to conclude that the pope in fact said what Biden asserted.

Why the silence on the part of the pope and the Vatican? One explanation is that admitting to having offered Biden such encouragement would seem to violate canon 915 of the Code of Canon Law. It provides that Catholics "obstinately persevering in manifest grave sin" are to be denied Communion. The silence of the chief shepherd amidst the slaughter of the lambs may portend the outcome of the United States Conference of Catholic Bishops' upcoming meeting in Baltimore.

Many Catholics are also scandalized by the pope's silence and the Vatican's refusal to deny Biden's claim.

At that meeting, one of the topics for "debate" is whether pro-abortion politicians including so-called "good Catholic" Biden should be denied Holy Communion. America's Catholics will soon find out whether their bishops will follow suit with Francis, Vatican officials and over 60 U.S. prelates perceived to be contradicting the longstanding guidance from the Congregation for the Doctrine of the Faith that Catholic politicians who advance abortion are in a state of grave sin and should not receive the Eucharist.

News Report: Not a 'Good Catholic'

This is not the first time Pope Francis has failed to confront someone who engages in or supports practices considered to be seriously sinful. In recounting his meeting with the pope, Biden told reporters his respect for Francis stems in part from the pope's infamous remark, "Who am I to judge?" The truth is that the pope was not asked about his position on "homosexuality," but rather about the homosexual behavior of his friend, Msgr. Battista Ricca, who allegedly cohabitated in Paraguay with a Swiss homosexual, Patrick Haari; was caught with a gay prostitute in an elevator; and was severely beaten up in a gay bar.

Francis told reporters that, with regard to Ricca, there was an "investigation [and] there was nothing of what had been alleged."

In like fashion, when Bp. Gustavo Zanchetta got caught up in a scandal wherein nude selfies and obscene pictures of homosexual sex were discovered on his cell phone, Pope Francis accepted the bishop's excuse that these materials were uploaded by someone else. Zanchetta will face a criminal trial in February of 2022 for alleged "aggravated continuous sexual assault" of two adult seminarians.

It will be interesting to note the feelings of Catholics who joined the Church in the past because of its strong pro-life stance and its defense of marriage as the life-giving union between one man and one woman. A number of Protestant ministers became Catholics over the past decades when their denominations began endorsing same-sex "marriages" and ordained gay, lesbian and transgender bishops. These converts, perceiving the Catholic Church's moral and doctrinal teachings to be more authentically Christian, believed that the denominations in which many of them were raised had compromised biblical truths by caving to the political and social philosophies of the present age.

What will future generations of Catholics have to say about their shepherds who stood silent when faced with a moral crisis?

In light of the compromises many Catholic leaders are making on issues like abortion and homosexual behavior, it should not come as a surprise that "every major American church that has taken steps toward liberalization of sexual issues has seen a steep decline in membership."

With a decrease in the number of heterosexually oriented bishops, priests and seminarians — who have historically supported the Church's pro-life and pro-family teachings — it comes as no surprise that the U.S. Catholic population has decreased by over 3 million since 2018.

It may be too little too late that more orthodox young priests are coming up through the ranks because so many faithful are already fleeing. In fact, parishes in the United States have been closing at an average rate of 93 per year since 1990. Currently, over 30 million Americans — some 10% of the U.S. population — now identify as former Catholics. That makes them the second-largest faith group in the United States.

The fact that the USCCB will "debate" the nonnegotiable relationship between the sanctity of life and the Eucharist in Baltimore next week reveals an appalling lack of courage. Is the American Catholic Church joining the ranks of those Protestant denominations whose members have fallen away after being scandalized by their pastors' endorsement of moral evils? What will future generations of Catholics have to say about their shepherds who stood silent when faced with a moral crisis? 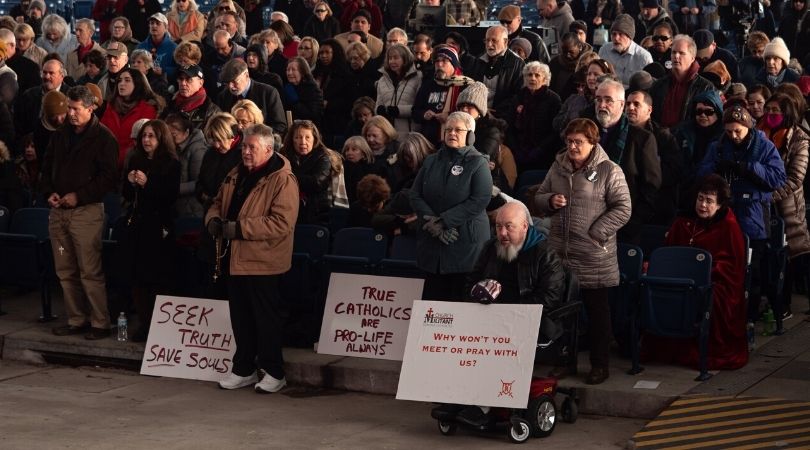