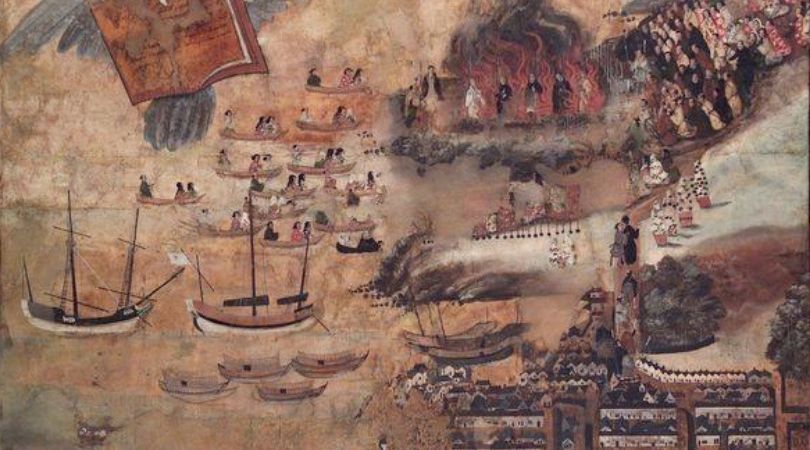 On Martyrs Hill in Nagasaki

Given the whirlwind of troubles afflicting the Church today — the worship of pagan idols at the Amazon Synod, the ongoing cover-up of clerical sex crimes, the theft of half a billion dollars from Peter's Pence — some of the faithful might be tempted to throw up their hands, drop all pretense of being truly Catholic, and join the gulled masses on their merry ride to Hell. Thank God we have the witness of the martyrs.

In the last week of November 2019, Pope Francis trod the soil baptized with Catholic blood in one of history's cruelest persecutions. While visiting Tokyo, Hiroshima and especially Nagasaki, our first Jesuit pope has likely recalled St. Francis Xavier, who brought Christ to Japan on the Feast of the Assumption in 1549. Hopefully, the modern Francis has also contemplated the agonies and privations that his forebears lived and breathed in the centuries of that great darkness.

Hopefully, the modern Francis has also contemplated the agonies and privations that his forebears lived and breathed.

When that first Jesuit mission reached Japan, they found her in a state of civil war. It was thus providential that they landed in Kagoshima, whose powerful lord gave them safe haven where they could learn about the Japanese and plant the Gospel seeds that would root in countless Japanese hearts. Saint Francis Xavier reported:

The people whom we have met so far, are the best who have as yet been discovered, and it seems to me that we shall never find among heathens another race to equal the Japanese. … They are a people of very good will, very sociable, and very desirous of knowledge; they are very fond of hearing about things of God.

After trekking much of Japan, the saint departed in November 1551, leaving two Jesuits behind to carry on the superhuman task ahead. He would fall ill on Nov. 20, 1552 and die 12 days later on an island south of China, carrying to Heaven his unfulfilled dream of getting into that closed country, converting its emperor and returning to Japan to do the same.

Yet the seeds he had planted did thrive, so much so that the warlord Toyotomi Hideyoshi, whose power grew to compass all Japan, became jealous of the priests of that religion that had stolen the hearts of tens of thousands of his people. In 1587, Hideyoshi banned the Faith; a decade later, to drive in his point, he crucified 26 Catholic men and boys on a slope called Nishi-zaka overlooking Nagasaki Bay. His death in 1598 gave the Church a needed respite.

And yet it was short-lived. In 1614, a new persecution shook Japan. The Tokugawa shoguns who succeeded Hideyoshi made the very life and breath of every human in Japan contingent on his willingness to spurn the Catholic Faith and betray all known believers to the murderous regime.

But some preferred a holy death in public view to Hell and dishonor. One such fearless believer was yet another Jesuit, a humble lay brother named Leonardo Kimura.

In November of 1619, Brother Leonardo was confined in Nagasaki's jail, where he had spent three grueling years. Japanese prisons of this period were deathly hellholes, their prisoners crammed like sardines into dark, dank, unvented wooden cages whose dirt floors bred vermin while the air stunk beyond description. Disease and infestation were rampant, and many died, their bodies sometimes left in place for days on end until official permission could be gotten by the guards to remove them.

However, neither dankness nor lice nor stench nor filth nor inhuman cramping nor lethal illness was sufficient to deter Brother Kimura from saving souls. Within the confines of his pestilential earthly Hell, he lived a holy life along with three fellow-prisoners in his spiritual charge. Their regimen is documented in François Solier's Histoire:

They started every day with an hour of silent prayer; next they prayed the Litany of the Saints aloud followed by other prayers, a second hour. They did spiritual reading until mealtime, after which each applied himself to some edifying activity. Evenings, another hour of prayer. All fasted at least three days a week, during which they also scourged themselves. They prayed five hours on Fridays in honor of the Five Wounds of Christ. Every month they did the Forty Hours devotion to bring Heaven's help to the persecuted Christians and the preachers of the Gospel.

Eventually the warden, seeing that this Jesuit had turned his jail into a house of prayer, moved him to a separate cell whose ceiling was so low that he couldn't raise his head while squatting on the floor; but he still evangelized. By the time they led Leonardo out of prison to meet his death, he had 86 baptisms under his belt, numbering both prisoners and guards.

Yet in dying he proclaimed Christ more boldly than ever. While being marched toward a death-cage at the edge of Nagasaki Bay along with four other faithful believers, this indomitable Jesuit proclaimed the Gospel at the top of his lungs to the thousands lining the roadside, watching from boats offshore, and blanketing the mountainside opposite the bay: a message of hope for all the truth-starved ears of benighted Catholic Nagasaki.

But this was only the prologue.

Freed of his stake, he bent to earth, took up two burning embers in his hands, and held them aloft as if they were heavenly jewels.

The five were tied to stakes; the wood was lit; a cloud of smoke enveloped the martyrs — and then a marvel. The smoke cleared to reveal Leonardo wrapped in flames, his face exuding joy, waiting for his ropes to burn away. Then, freed of his stake, he bent to earth, took up two burning embers in his hands, and held them aloft "as if they were heavenly jewels," singing Laudate dominum omnes gentes.

Nagasaki's thousands, astonished, "made the air ring with the sacred names of Jesus and Mary" while a children's choir began singing praises from a boat offshore.

The martyrs' bones and ashes would be chopped to bits, bagged up and sunk into the deep as if to wipe the dazzling truth from history, a futile stab at the invincible. For history cannot forget.

Perhaps, back in Rome, Pope Francis will reflect, having looked out on that water from atop Nishi-zaka, better known as Martyrs' Hill — where so many faithful Jesuits shed their lives.

Luke O'Hara became a Roman Catholic in Japan. His articles and books about Japan’s martyrs can be found at his website, kirishtan.com.