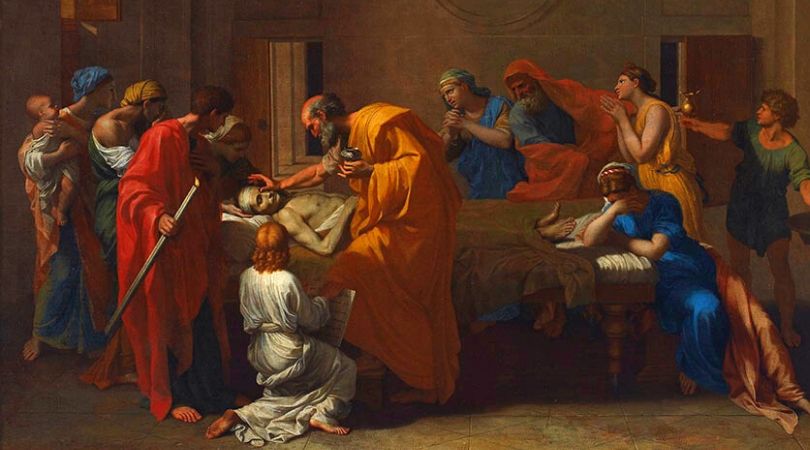 After a lifetime of giving donations to the collection basket, Catholics are increasingly outraged at finding themselves deprived of that minimum and essential pastoral care that they expected all their lives would be offered to them by their spiritual fathers — the one sacrament that a Catholic needs the most on his deathbed: extreme unction, also known as anointing of the sick.

With word slowly filtering out of Italy and France in the past month of hospitals outright banning priests from entering patients' rooms and intensive care units, the conventional wisdom of clergy here in the United States was, "That could never happen here in America."

Here in the United States, the bishops have taken the initiative to show their faithful just how much they are taking measures "to protect" their flock from contracting the coronavirus. If anything, one gets the impression that some bishops are competing with others to show just how draconian they are.

Consider the diocese of Springfield in Massachusetts. On Friday, March 13, Mark Dupont, the secretary for communications for the diocese, e-mailed an "important message" to all parishes, priests, deacons and staff of his diocese, communicating the "directives" of Bp. Mitchell Rozanski suspending all Masses "until further notice," and ordering that "all pastoral in-home and nursing home visits" be discontinued "unless the individual is in critical condition."

One gets the impression that some bishops are competing with others to show just how draconian they are.

A few days later, on March 16, Dupont informed the priests and deacons of the diocese that the bishop was ordering "all churches and chapels" to be closed until further notice, stating, "I had no choice but to take this additional truly painful step."

Lest he be accused of lack of imagination, on March 25, Bp. Rozanski then decided he was "allowing the assigned Catholic hospital chaplains, standing outside a patient's room or away from their bedside, to dab a cotton swab with holy oil and then allow a nurse to enter a patient's room and administer the oil." While nurses were administering the holy oil, "prayers [on the part of the hospital chaplains] may be provided via telephone," the bishop further decreed.

Suffice it to say that the holy oil-dabbing nurse idea was not appreciated by Vatican officials, which, it appears, "after further discussion and review" convinced the bishop that the idea of "rescinding [his] previous directive" was a better one.

On March 27, Bp. Rozanski notified all priests, deacons and parishes of his diocese of his change in pastoral policy, only to compound matters a thousand-fold by additionally announcing that he was "temporarily suspending the anointing of the sick in all instances" (ephasis added).

In the same e-mail, Bp. Rozanski announces that regarding confessions, "I have taken a number of suggestions under advisement." For Catholics inquiring to know, all bets are that the bishop's next decision will be to ban, if not severely restrict, the individual confession of sins.

What, one may rightly ask, does the moral treasury of the Church provide as "directives" in these matters to her bishops?

The shepherd, by reason of office, is held under pain of mortal sin to give [extreme unction] to those who ask, unless a just cause might excuse [doing so]: even in a time of plague, in such a manner that he might avoid danger to [his] life ... If those infected with plague might have confessed, one can omit [extreme unction] without sin. [emphasis mine]

The pastor, unless a just cause (which can be danger to life) may excuse, is held in justice, by reason of his office (and really under pain of mortal sin) to confer [extreme unction] to his subjects who ask for it. Can. 939 [Code of Canon Law of 1917]. On the contrary, in every case, assuredly not even excepting danger to [the priest's] life, he is held to this, if the sick one has not confessed for a long time and it is probable that he would be judged [to be] in the state of mortal sin, and due to his privation of the senses one could not absolve except sub conditione [under condition]. (VI, 729; H.Ap., VII, 28; XVII, l.c.). Another priest, by reason of the same canon in a case of necessity is held to do the same out of charity […] on the contrary under pain of mortal sin, if the sick one be greatly in need of this sacrament, for example, if otherwise he would die without any sacrament (VI, l.c., 12o). (emphasis added)

According to St. Alphonsus de Ligouri, the above teaching constitutes the common doctrine of theologians of the Catholic Church. Cf. Theologia Moralis, Lib. VI, n. 729.

To be or not to be a priest — that is the question that all priests have to decide in these darkest of days for them and for all faithful, above and beyond whatever a diocesan bishop may decree.

What this all means is the following: a bishop who forbids his priests from administering extreme unction/anointing of the sick to dying Catholics who are not or have not been able to confess their sins due to physical or moral impossibility commits a most grievous sin, a terrible sin of injustice, not just lack of charity.

To be or not to be a priest — that is the question that all priests have to decide in these darkest of days for them and for all faithful, above and beyond whatever a diocesan bishop may decree. For it says in John 10:13–15:

The good shepherd giveth his life for his sheep. But the hireling, and he that is not the shepherd, whose own the sheep are not, seeth the wolf coming, and leaveth the sheep, and flieth: and the wolf catcheth, and scattereth the sheep: And hireling flieth, because he is a hireling: and he hath no care for the sheep. I am the good shepherd; and I know mine, and mine know me. As the Father knoweth me, and I know the Father: and I lay down my life for my sheep.

Every priest will have to render a grave account to the Almighty Judge, including the shepherds who abandon their flock in their greatest time of need.