Wednesday night, the Newark archbishop bewildered followers by tweeting, "Supposed to be airborne in 10 minutes. Nighty-night, baby. I love you."

As news of the post spread, the Associated Press reports Tobin deleted the message because "it was being misinterpreted."

Free clip from CHURCH MILITANT Premium
WATCH MORE LIKE THIS
According to archdiocesan Director of Communications Jim Goodness, the tweet was accidental.

Goodness is suggesting "Nighty-night, baby. I love you" was a private message intended for the 65-year-old archbishop's sister. 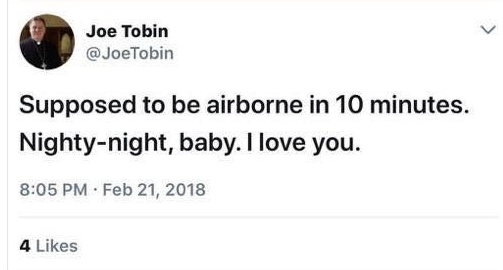 Tobin has eight younger sisters, and "they're all his baby sisters," he explains.

As one user noted on Tobin's page, if text notifications are enabled on Twitter, it is easy to accidentally tweet a message that's intended to be a text message to someone else. One-time Democratic N. Y. Congressman Anthony Weiner can attest to this.

The archbishop's Twitter account @JoeTobin shows he posts infrequently, with the last message — after Wednesday night's was deleted — dated November 18.

A spiritual son of Cdl. John Dearden, the Detroit native has distinguished himself as a leading liberal inside the U.S. Catholic Church. From 2010-2012, Tobin servedas Secretary of the Congregation for Institutes of Consecrated Life and Societies of Apostolic Life.

As head of the Newark archdiocese, Tobin has allowed his cathedral, the Cathedral Basilica of the Sacred Heart, to serve as a gay pilgrimage site.

But the stint was short-lived. After just two years, Pope Benedict XVI removed Tobin from his Vatican post and redirected him back to the United States to serve as archbishop of Indianapolis. To Vatican insiders, the transfer was a step down on the career ladder. 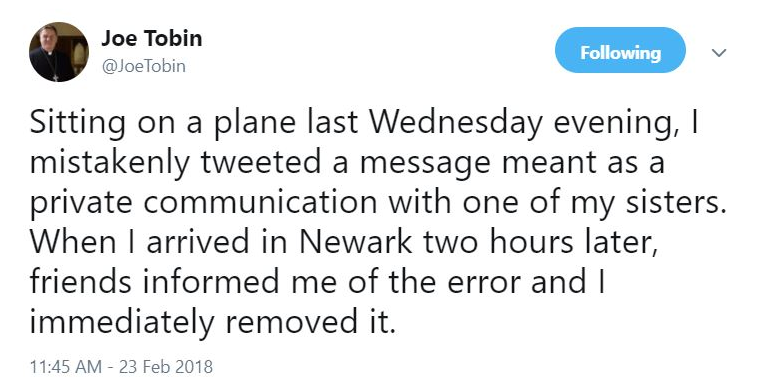 Some suggest Benedict's move was an attempt to safeguard the Holy See's investigation into the U.S. Leadership Conference of Women Religious, whose theological dissent is legendary. Tobin is known to sympathize with calls for women priests and even likes the idea of female cardinals.

Under Pope Francis, Tobin has resumed his rise in rank. Elevated to the rank of cardinal in November 2016, he was named archbishop of Newark the following January.

As head of the Newark archdiocese, Tobin has allowed his cathedral, the Cathedral Basilica of the Sacred Heart, to serve as a gay pilgrimage site.

In April 2017, he gave his blessing to an "LGBT pilgrimage and Mass" at Sacred Heart. When asked if the event would promote chastity among participants, organizers refused to give a clear answer. 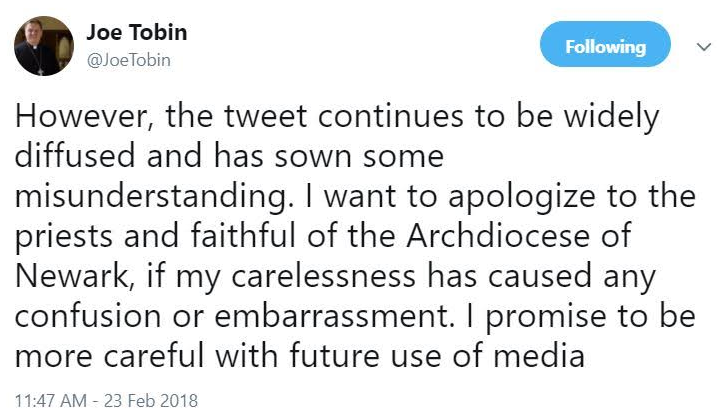 Tobin is among a handful of prelates who have publicly lauded the work of homosexualist Jesuit Fr. James Martin. In a statement praising Martin's 2017 book Building a Bridge, Tobin he said, "Fr. Martin's brave, prophetic and inspiring, new book marks an essential step in inviting church leaders to minister with more compassion and in reminding LGBT Catholics that they are as much a part of our Church as any other Catholic."

Tobin is also among the few prelates to publicly criticize the dubia cardinals, denouncing critics of Amoris Laetitia as "naive at best."