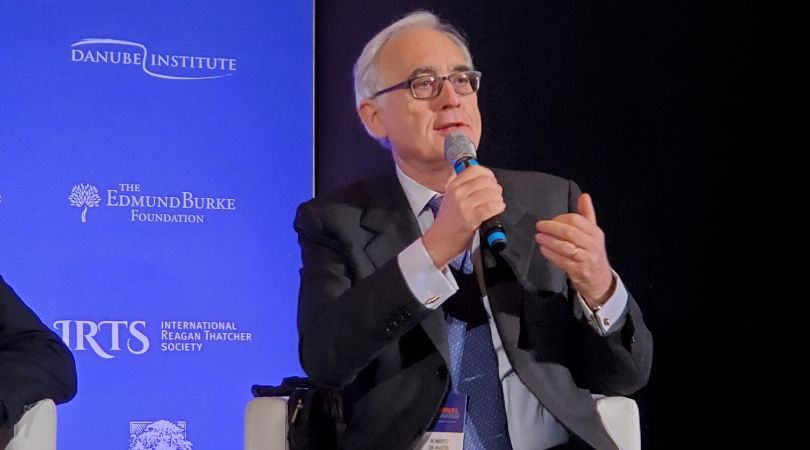 ROME (ChurchMilitant.com) - A distinguished Catholic historian is calling for communism to be put on trial in a moral and legal process analogous to that of the Nuremberg trials held after World War II to prosecute Nazi leaders who planned, carried out or participated in war crimes and the Holocaust.

Speaking on the theme of "God, Honor, Country: President Ronald Reagan, Pope John Paul II and the Freedom of Nations," at the National Conservatism Conference in Rome last Tuesday, Prof. Roberto de Mattei told a packed audience of politicians, academics and journalists that communism had "never been seen as an 'evil,' not even after its political collapse."

"The 'dictatorship of the proletariat' has been replaced with the 'dictatorship of relativism' that comes from the same poisoned well of dialectical materialism," the author of La dittatura del relativismo (The Dictatorship of Relativism) explained, but "not only has there not been a trial, there has not even been a cultural debate," on the horrific crimes of communism.

"I am convinced that in the 20th century there was no crime comparable to that of communism, in terms of the length of time that it lasted, the geographical territory it embraced, and also the amount of hatred that it knew how to generate. For this reason, communism should be brought to trial," the director of the Lepanto Foundation insisted.

I am convinced that in the 20th century there was no crime comparable to that of communism.

"We must not be afraid to say that communism is still alive," Mattei lamented, pointing to the survival and mutation of the "communist virus" in "Western culture, media, politics and also the Church."

In a thinly veiled polemic against Pope Francis, the historian lashed out at "the accord signed by the Holy See with China's communist government," noting that Cdl. Joseph Zen, the highest prelate in China and the leading voice for persecuted Catholics, recently wrote to the College of Cardinals "imploring them to denounce this agreement."

The pontiff had "renounced being a spiritual leader" in order to focus more on political and social issues, such as global climate change, making Pope Francis "the political leader of the international Left," said Mattei, referring to Francis' encyclical, Laudato Sí.

"It is for this reason that we say that communism is not dead, and we will continue to call for a trial of communism analogous to the Nuremberg trials," urge Mattei, chief editor of Radici Cristiane.

The historian also lambasted the homage to Karl Marx in 2018 paid by Jean-Claude Juncker, then-president of the European Commission, at the bicentennial celebrations of Marx's birth.

When Pope Francis visited Bolivia in 2015 he accepted from Morales a crucifix adorned with a hammer and sickle.

"That same year, the New York Times celebrated the bicentennial with an editorial in which it treated Marx like a prophet. And today communism is flourishing not only in China and Latin America but also in Europe, where the Communist Parties have disappeared but the ideology survives," Mattei commented.

Subtly contrasting Pope Francis with Pope John Paul II, the historian explained that President Ronald Reagan and John Paul II were able to defeat communism because both "made a moral judgment about the political movements of their day."

"Pope John Paul II, in his last book Memory and Identity, asserted that 'the ideologies of evil are profoundly rooted in the history of European thought,' especially the French Enlightenment, the radically atheist Marxist revolution, National Socialist ideology, abortion and gay rights conferred by the European Parliament," Mattei remarked.

The historian also excoriated "the new Europe, which has expelled the name of Christ and every reference to Christianity from its founding treaty" and "is fully realizing the Gramscian plan of the secularization of society."

Citing Soviet dissident Vladimir Bukovsky, Mattei lambasted the "gulag in the European Union" as an "intellectual gulag known as political correctness" which ostracizes anyone who tries to "to speak their mind on race or gender" with views that differ from the officially approved views.

Last October, through the initiative of Bukovsky and Prof. Renato Cristin, a group of intellectuals from various nations of the world launched an appeal for a new Nuremberg Trial on communism, which he supported, Mattei said.

The historian said he was renewing this demand as such a process was possible even though decades had passed since the fall of the Berlin Wall and many of those responsible for communist crimes were dead or had apparently converted to democracy.

This trial "before being understood as a legal process ought to be seen as a cultural and moral process that denounces the responsibility of the architects of communism and their accomplices before history and before public opinion, just as happened for National Socialism," Mattei stated.

The recently deposed Bolivian leader Evo Morales was, de Souza writes, "the Holy Father's favorite leader in the Americas," and Francis met with the demagogic Morales six times in six years, considering the man to be his friend.

In an act never explained by the Vatican, de Souza comments, when Pope Francis visited Bolivia in 2015 he accepted from Morales a crucifix adorned with a hammer and sickle.