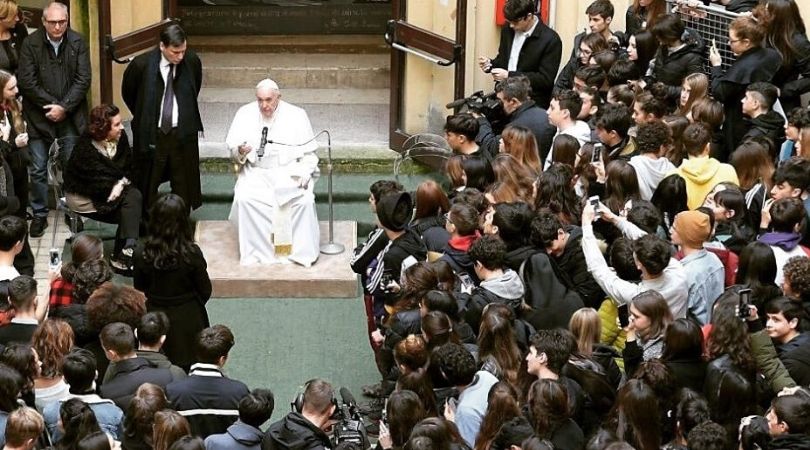 ROME (ChurchMilitant.com) - A distinguished authority on Islamic jihad has excoriated Pope Francis for equating the evangelization of Jews and Muslims with the Crusades.

"The Pope is purveying historical fiction," Dr. Robert Spencer, author of The Politically Incorrect Guide to Islam and the Crusades, told Church Militant.

"The Crusades were not an exercise in forced conversion. In reality, they were a small-scale defensive response after 450 years of Islamic jihad aggression had conquered over half of Christendom, and an attempt to protect Christian pilgrims in the Holy Land," Spencer asserted.

Spencer, who argues in his work The History of Jihad: From Muhammad to ISIS, that the Roman Catholic Church "was at the forefront of efforts to resist jihad aggression in Europe," was responding to Francis' remarks to high school students not to convert Jews or Muslims to Catholicism.

During the Holy Father's surprise visit to the Pilo Albertelli High School on Friday, two pupils, Damiano and Francesco, asked the pontiff how he would respond to "people of other religious beliefs" and what he would say if an atheist came to him and asked him "for a fundamental reason to start believing."

Francis replied that his experience of growing up in Argentina, with its phenomenon of migration, had led him to "respect believing children of other religions," because in the public school he attended he "always had companions from other religions."

"We were educated to co-exist. This taught me a lot, that we are all the same, all children of God, and this purifies your gaze, it humanizes it," he said.

The pontiff went on to upbraid "a small group of narrow-minded Catholics" in Argentina, "who do not want Jews, do not want Muslims, but I never liked this group; it is a fringe group ... and when I used to teach I saw them for what they were."

Francis insisted that a Christian should never try to convince others of the truth of Christianity:

It didn't occur to me and it doesn't have to be like saying to a boy or a girl: "You are Jewish, you are Muslim: come, be converted!" You be consistent with your faith and that consistency is what will make you mature. We are not in the times of the Crusades.

The Pope is purveying historical fiction. The Crusades were not an exercise in forced conversion.

As he did last month, Francis proceeded to cite the 11th-century French fictional epic poem La Chanson de Roland as an example of how Catholics tried to convert Muslims by the sword:

It is an ugly thing but it made me suffer so much, a passage from La Chanson de Roland, when the Christians, the crusaders had defeated the Muslims and then all the Muslims were lined up and at the front of the line was a priest and a soldier. The priest stood in front of the baptismal font and as each one approached, he would ask: "Baptism or the sword?" This happened in history!

Spencer, author of 18 books, including The Truth About Muhammad, told Church Militant that the Pope's version of history is pure historical revisionism:

The states that were set up as a result [of the Crusades] were so hospitable to non-Christians that a Muslim of the time, Ibn Jubayr, lamented that many Muslims who lived in the region preferred to live in the Crusader states, which were stable, rather than in their own turbulent lands. Those who did so were not forced to convert.

He continued, "Pope Urban II, who called for the First Crusade at the Council of Clermont in 1095, was calling for a defensive action — one that was long overdue."

Extensively quoting Urban II, Spencer noted that "the pope says nothing about conversion or conquest" but pleads for Western Catholics to rescue their "brethren who live in the East" from centuries of Muslim occupation of Christian lands and intense persecution of Christians.

Pope Urban didn't envision the Crusades as a chance for gain. He decreed that lands recovered from the Muslims would belong to Byzantine Emperor Alexios I Komnenos and the Byzantine Empire.

"The pope saw the Crusades as an act of sacrifice rather than profit," writes Spencer.

Director of Jihad Watch and co-founder of Stop the Islamization of America (SIOA) and the American Freedom Defense Initiative (AFDI), Spencer also clarified the context of La Chanson de Roland:

The Song of Roland was enormously popular and inculcated in the Christians who sang and celebrated it in what came to be known (in the European Middle Ages) as knightly virtues: loyalty, courage and perseverance, even in the face of overwhelming odds. These were virtues that would be needed if Europe was to hold out against the ever-advancing jihad.

In 2016, Spencer was accused of being "a dissenter from the papal magisterium" for disagreeing with Francis' 2013 declaration that "authentic Islam and a proper reading of the Koran are opposed to every form of violence."

"But is the affirmation that Islam is a religion of peace really a matter of Catholic faith or morals?" Spencer responded. "I don't see how; it's a statement about the teachings of a different religion altogether. Is the content of the Buddhist or Hindu faith also a matter of Catholic morals?"

"Must Catholics go with Francis and reject Callixtus as a 'dissenter from the papal magisterium' because he believed Islam to be diabolical?" he asked. "What authority does Francis have that Callixtus did not have? Or does Francis trump Callixtus solely by virtue of being of the present day and not forgotten?"