Tradition and Revival in Mexico 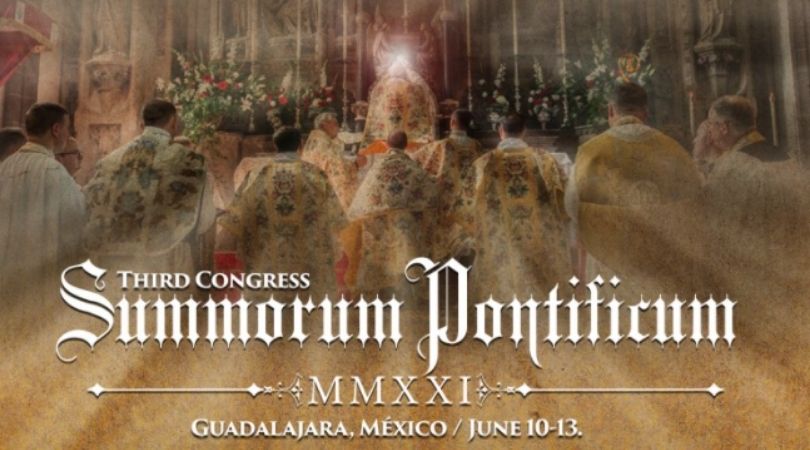 Conference on traditional liturgy in June

Organized by the Priestly Fraternity of St. Peter (FSSP), the Third Conference on Summorum Pontificum will incorporate a series of events for "Catholics who want to learn more about the richness of their liturgical, artistic, theological and spiritual traditions," according to the conference's website.

Ahead of the conference, Fr. Daniel Heenan (of the FSSP) told Church Militant he hopes the rebirth of the Latin Mass will restore the failing Church in Mexico, where young people and the poor thirst for traditional worship and devotions.

"Many Catholics don't know the traditional Mass, traditional music and traditional thought," said Fr. Heenan, adding that the conference will help all Catholics enrich their faith. "The devotion and solemnity of the Traditional Latin Mass," he noted, "can also enrich the ordinary form of the Mass."

Speakers and participants include Cdl. Raymond Burke, Fr. Javier Olivera Ravasi, Dr. Peter Kwasniewski and Dr. John Pepino. All of the speakers are notable for their enthusiasm for encouraging the use of the Traditional Latin Mass and the celebration of the sacraments according to time-honored practices.

Cardinal Burke is a member of the Apostolic Signatura, the Vatican's highest tribunal. He was prefect of that body until being removed by Pope Francis in 2014. Burke was one of the four cardinals responsible for the Dubia (questions) seeking clarity about the Pope's apostolic exhortation Amoris Laetitia.

Pope Francis removed Burke from the Congregation for Divine Worship in 2016. A notable defender of holy Tradition, Cdl. Burke has called pro-abortion Catholic politicians — including Joseph Biden and John Kerry — "apostates" who should refrain from Holy Communion.

Dr. Peter Kwasniewski is a theologian and composer who formerly taught at the Franciscan University of Steubenville and Wyoming Catholic College. He is the author of 10 books and more than 1,300 academic and popular articles.

Dr. John Pepino is a professor of Greek, Latin, history and Patristics at FSSP's Our Lady of Guadalupe Seminary in Nebraska. Father Javier Olivera Ravasi is an Argentine priest, attorney and writer and vlogger on theology, Church history and the Latin Mass.

Summorum Pontificum is a 2007 apostolic letter issued by Pope Benedict XVI, which gave priests broad permission to celebrate Mass in the Extraordinary Form — also called the Traditional Latin Mass. Pope Benedict wrote, "In parishes where a group of the faithful attached to the previous liturgical tradition stably exists, the parish priest should willingly accede to their requests to celebrate Holy Mass according to the rite of the 1962 Roman Missal, under the governance of the bishop."

The beauty of traditional liturgies, art and chant lead people to the best and thus to the holy.

Benedict XVI noted in Summorum Pontificum that Pope St. Gregory the Great (A.D. 540–602) had encouraged the use of the Roman rite throughout Western Europe, writing:

The sacred Liturgy, celebrated according to the Roman usage, enriched the faith and piety, as well as the culture, of numerous peoples.  It is well known that in every century of the Christian era, the Church's Latin Liturgy in its various forms has inspired countless saints in their spiritual life, confirmed many peoples in the virtue of religion and enriched their devotion.

Despite the promulgation of Summorum Pontificum, bishops and priests in many countries have not encouraged the celebration of the Traditional Latin Mass. For example, Fr. Thomas Reese, S.J., suggested recently the Tridentine Mass should be limited to elderly people and that children should be banned.

Many Mexican bishops and laity, Fr. Heenan said, appear to believe the Traditional Latin Mass is celebrated only by those no longer in communion with the Pope. "They think it is the sede vacante Mass," he said, in reference to the belief that the current occupant of the Chair of Peter is not the true pontiff.  This misconception, he said, has led to a dearth of offerings of the Traditional Latin Mass in Mexico and Latin America as a whole.

Father Heenan said the conference in Mexico will serve as a "showcase for some important speakers in the traditional movement," in the hope of making the Traditional Latin Mass more accepted worldwide, but especially in Latin America. "As an exposition of traditional Liturgy and traditional thought, it will offer a place for traditional Catholics from all over the Americas to gather," he added.

He said Cdl. Burke will celebrate three pontifical Masses, and will ordain Rev. Joel Pinto Rodriguez of Guadalajara as an FSSP priest.

Because of church closures due to COVID concerns and people falling away from the Faith, Fr. Heenan said there are concerns about whether Catholics will return to their parishes. He observed the beauty of traditional liturgies, art and chant lead people to the best and thus to the holy.

The priest deplored statistics recently released by Mexico's census, which revealed a precipitous drop in the number of Catholics with a concomitant rise in the number of atheists and non-believers. He pointed out that Vatican nuncio Abp. Franco Coppola told Mexican bishops last month that they had "lost not just one out of 100 of the flock but a fourth of them!"

The 2020 Mexican census showed the numbers of Catholics dropped by 5 percentage points (from 82.7 to 77.7%) since 2010, due to the advance of secularism and Protestant sects. Father Heenan noted Mexico became Catholic back when the Traditional Latin Mass was universal and suggested that the Church might flourish again with traditional Liturgy and devotions. "Research shows that [Traditional Latin Mass] is overwhelmingly popular with young people, which is contrary to some perceptions," he observed.

He added that this is particularly the case among Mexico's poor and indigenous peoples, where traditional forms of worship and devotion remain popular.

Guadalajara is the capital of the state of Jalisco, at the center of a region that revolted against the atheistic government that rose to power after the Revolution of 1910. In 1926, after seeing churches seized by the government, priests jailed and sent into exile and believers persecuted, armed Catholics barricaded themselves in a Guadalajara church and confronted government troops. When they ran out of ammunition, they surrendered but saw their priest and his vicar murdered by soldiers.

The ensuing conflict lasted for three years and became known as the Cristero War or La Cristiada. Thousands of Catholics died defending their Faith, including 13-year-old St. José Sánchez del Río, who was raised to the altars by Pope Francis in 2016, and Fr. Miguel Pro, S.J., both of whom were executed by Mexico's army.  Of 31 Mexican saints, 26 were martyrs of La Cristiada. Father Heenan told Church Militant it is poignant that the coming conference will be held in the state of Jalisco, where so many died for their Faith and where Mexico's renewal might now begin.