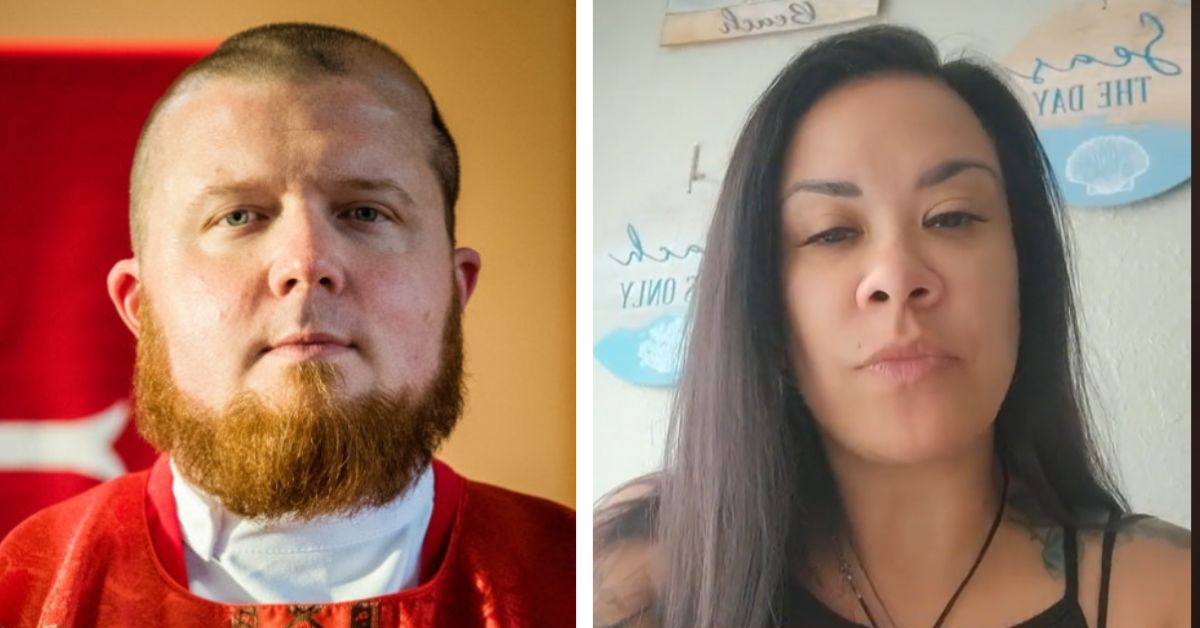 SAGINAW, Mich. (ChurchMilitant.com) - A traditional priest is being accused of sexual relations with an adult woman.

Father Edwin Dwyer of the diocese of Saginaw, MI was reportedly outed by a woman named Gigi Lozano in a series of recent Tik Tok videos captioned "I accidentally hooked up with a Catholic priest."

Lozano first explains in a June 11 video how their tryst came about.

"I go to one of the local spots here on the island in Corpus Christi, TX, called the Boathouse," she begins. "Immediately, there's a guy next to me, and he notices me, and he starts trying to make conversation."

"All of a sudden, religion starts popping up into the conversation, like traditions and things like that," she said, after Dwyer asked her to go outside on the balcony. "Anyways, long story short, we're vibing, and I tell him, you know what, let's go to the beach."

They proceeded to go swimming at night. According to Lozano, Dwyer invited her to his apartment to dry off, and they ended up having sex: "Then something ends up going down between him and I."

He asked her out to dinner the next day, and during the conversation she asked him why he was never married: "It turns out this motherf***er was a Catholic priest, here on a sabbatical, on a vacation. A Catholic f***ing priest."

@gigilozano513 Now at this point nothing can surprise me!! #wtf ♬ original sound - GiGi Lozano

"He did the craziest, freakiest things to me," she added. "That was somebody who was very experienced, not somebody who's been celibate for however long."

In a June 13 video, Lozano says she confronted Dwyer and called him a "hypocrite." He later told her he regretted his actions and would be confessing his sins at a local Catholic church.

That was somebody who was very experienced, not somebody who's been celibate for however long.

A letter to Church Militant dated June 21 purporting to be from Fr. Dwyer states:

I must say, I have messed up and disappointed many people by living a double life while on vacation last week. I know you like to call out priests who live a double life and have gay relationships. I too have had several relationships but with women, and I finally got caught and was called out on social media. ...

My bishop is upset with me and so to [sic] are many others.

Dwyer has told Church Militant, however, he did not author the letter and he believes it may have been sent by an unnamed Saginaw priest: "I did NOT write the letter."

Asked whether he had any comments on the scandal, he remained silent. He did not deny Lozano's allegations.

In follow-up videos, Lozano, a lapsed Catholic, discussed the impact the encounter has had on her, her anger at his deceit and how his hypocrisy has confirmed her reasons not to stay in the Catholic church.

"If I was a devout Catholic, can you imagine what that would've done to my faith?" Lozano asks in a June 18 video. "Now, I was born into the Catholic religion. Why? Because my grandparents were born Catholic, my mother was Catholic, they had us baptized as Catholics."

According to Lozano, Dwyer was alarmed when she told him she had exposed him on social media: "And immediately he was like, 'What? On what platform? Did you use my name? Did you say where I'm from? Did you tell people what church I'm from?'"

Church Militant has previously provided positive coverage of Dwyer, after he offered a highly praised homily in 2018 urging a return to Tradition in order to restore the Church.

The next year, after Dwyer implemented more traditional liturgical practices at his parish, Our Lady of Peace church in Bay City, then-apostolic administrator Bp. Walter Hurley sidelined him.

In February 2019, Hurley announced the removal of Dwyer, after a handful of older parishioners complained. As Church Militant reported at the time:

Dwyer has corrected liturgical abuses at the parish, reducing the number of extraordinary ministers of Holy Communion, as mandated by Church law, which only allows such ministers when the number of communicants is so large that the priest needs assistance. He also slowly introduced more traditional practices, including, among other things, using Latin for the Agnus Dei and Sanctus, placing two candlesticks on the altar, ringing bells during the consecration and using incense. These changes took place primarily at one Sunday morning Mass; the other Masses remained largely as they had before he arrived.

Even so, a handful of parishioners complained to the diocese about the changes. Dwyer's homilies were also a cause for complaint by some older Catholics, unaccustomed to the orthodoxy and sound teaching that marked his preaching. The younger parishioners and families, however, welcomed the changes.

At his final Mass, Dwyer noted:

It is very important for all of you to know that it was not due to any allegation of misconduct of any nature on my part that Bishop Hurley decided to revoke my appointments as chaplain of SVSU and as Parochial Administrator of Our Lady of Peace Parish. My appointments have been revoked, I am not being removed for any wrongdoing.

It led to upset Catholics holding Rosary protests outside the chancery during Hurley's priest personnel meetings, objecting to his treatment of tradition-minded clergy.

They held signs reading "Embrace Tradition," "Modernism Is Destroying the Church" and "Embrace Our Good Priests."

Church Militant contacted the Saginaw diocese to ask about the status of Fr. Dwyer's priestly ministry, but received no response.