BUENOS AIRES, Argentina (ChurchMilitant.com) - Proclaimed by local media as an act of "inclusion," a bishop presided over a Mass commemorating the patron saint of the Argentine province of San Luis that included a reading of prayer intentions by a well-known LGBTQ campaigner.

San Luis is the name of the capital city and a province in the center of Argentina, which has been dominated since the early 1800s by the powerful Rodríguez Saá family. On Aug. 25, at his cathedral, Bp. Gabriel Barba celebrated a Mass commemorating St. Louis, the only king of France to be raised to the altars, whose name was lent to the province 426 years ago.

Various politicians representing the pro-abortion Peronist Party were in the congregation. For the first time in many years, guitars accompanied the choir, which sang modern hymns of praise and worship.

Reports are mixed as to whether Bp. Barba had extended an invitation to Francia López, a man who identifies as a transgender woman. López called for prayers for "our common home," a formulation favored by environmentalists and those who attended the Amazonian Synod last year.

[The Mass] will allow LGBTQ people to 'attend all the [Church] celebrations just as they are, without having to lie.'

Local media reports suggest that the bishop called on López to attend the Mass and read the intentions, while a report by Crux penned by Argentine native Inés San Martín claimed that the bishop was surprised by the development.

Local television interviewed López, who said he had been invited initially by local civil authorities, who traditionally assist in preparations for the commemorative Mass. According to López, when Barba became aware of the city's invitation to López on the prior evening, he decided to have the LGBTQ personality participate actively in the Liturgy. López said he was "very happy" to be invited "as a trans person" and "social referent."

The Mass, López said, was "very symbolic and conveys clear messages that the Church wants to open its doors and bring in diverse families and the [LGBTQ] collective." He added that this was not a "personal achievement" but something that will allow LGBTQ people to "attend all the celebrations just as they are, without having to lie about having a 'heteronormative' life that they don't have."

The Catechism of the Catholic Church, in paragraph 2357, teaches that homosexual acts are of "grave depravity" and "intrinsically disordered" because they are contrary to the natural law, close the sexual act to the gift of life and do not proceed from a genuine affective and sexual complementarity. Paragraph 2359 calls to chastity anyone with homosexual desires. Likewise, paragraph 2393 calls "each of them, man and woman," to "acknowledge and accept" his birth-assigned sexual identity.

According to Crux, Fr. James Martin, S.J., the pro-LGBTQ editor-at-large of the Jesuit-run America Magazine, applauded López as a "child of God, a baptized Catholic and a full member of the Church," and added that it is "not a sin simply to be transgender person."

Moreover, Martin told Crux that "LGBTQ people" should be included in the Prayers of the Faithful. He added that the bishop is a "true pastor" for having welcomed a "transgender woman to pray in the cathedral." Crux referred to López as a "transgender woman" using female pronouns in reference to him.

According to Télam news service, López said that his appearance at the Mass was a "historic occasion that is very hopeful because it will allow us to build a Church as human beings, where the life choices of diverse families have encountered many obstacles to living their spiritual life."

Referring to Barba, López said the prelate's "message was so pastoral, with a gaze that is fixed on the poor." The LGBTQ advocate said that he is glad to belong to a Church that is a "place of inclusion and love for others."

The bishop is a 'true pastor' for having welcomed a 'transgender woman to pray in the cathedral.'

López runs a school and is also a well-known radio personality in San Luis. In 2016, a local court granted him guardianship of a 5-year-old boy. He also reportedly operates a soup kitchen for the poor.

Sister Monica Astorga, a friend of Pope Francis from his days as cardinal archbishop of Buenos Aires, told Crux that Bp. Barba did not know that López would participate in the Aug. 25 Mass. She congratulated Barba, saying that the bishop did not object once he learned of the invitation to López, whom he reportedly did not know identifies as transgender, saying that he was concerned about the optics of a prominent LGBTQ campaigner speaking from the pulpit.

Having long worked to aid the poor and marginalized, Astorga runs a shelter for "transgender" prostitutes in Neuquén, a province in southern Argentina, which was opposed by her congregation and the local bishop.

She told an Italian newspaper earlier this year she received support for her mission from Pope Francis, who wrote a letter just before the inauguration of the shelter that read, "God, who didn't attend seminary and didn't study theology, will reward you generously. I pray for you and your daughters." The pope reportedly told her that "transsexual" people are the "lepers of today."

Back in April, the pope reportedly sent money to a parish in Rome to aid "transsexual" prostitutes who were left without customers because of COVID-19 social distancing guidelines.

God, who didn't attend seminary and didn't study theology, will reward you generously.

San Luis has been notable for its traditionalism among Catholics, many of whom did not warmly greet the news about López. On his Facebook page, writer Tomás González Pondal predicted that Bp. Barba's supporters would commend charity toward López by referring to Jesus' ministrations to fallen women and prostitutes.

"Perfect. But that's not Barba," he wrote. "For him, there is no 'go and sin no more,' the merciful command of the Redeemer, but a pseudo-charity, an insidious enablement and effrontery that allows this unnatural ideology to be expressed from the altar steps by a transsexual."

Days after arriving in San Luis, Barba told the media that baptism is available for the children of single mothers, but also the children under the guardianship of homosexual partners.

"I have done so in the past," he said, "Every human being has a right to baptism."

The Vatican, however, says otherwise. A 1980 instruction on infant baptism issued by the Congregation for the Doctrine of the Faith (CDF) addresses the need to delay an infant's baptism when assurance is lacking that the child will be raised in the Catholic faith.

"But if these assurances are not really serious there can be grounds for delaying the sacrament; and if they are certainly non-existent the sacrament should even be refused," directs the CDF.

The instruction further clarifies, "In fact the Church can only accede to the desire of these parents if they give an assurance that, once the child is baptized, it will be given the benefit of the Christian upbringing required by the sacrament."

Many Catholics fail to see how homosexual partners can truly impart the Catholic faith to children when they preach a message contrary to it by their very lives.

While Bp. Barba has proclaimed that Holy Communion can be distributed optionally in the hand or the mouth, he said that distribution by mouth risks spreading the Wuhan virus. Until he came to the diocese, distribution was commonly by mouth until government authorities mandated that it be distributed by hand as a hygiene measure.

Much to the consternation of lay Catholics, Barba has also instituted in his diocese female altar servers — a custom introduced to the Latin rite of the Church during the pontificate of St. John Paul II that remains controversial.

Barba has told his flock that the Church places a priority on "the poor, the sick and the wretched of the earth." He called on believers to translate their spirituality into works of charity and the "love and ability to forgive" that characterize Christians who are on a journey toward "saintliness."

For him, there is no 'go and sin no more,' the merciful command of the Redeemer, but a pseudo-charity.

Barba was nominated to his post in July by Pope Francis, who had named him bishop of Gregorio de Laferrere — a suffragan diocese of the archdiocese of Buenos Aires — in 2013. He succeeded Bp. Pedro Martínez Perea, 64, from whom the Vatican reportedly demanded a resignation despite having not reached the mandatory age of retirement of 75 years.

Martínez Perea was named to the diocese during the pontificate of Benedict XVI, and his principal consecrator, Bp. Héctor Aguer, a conservative who is now the bishop emeritus of La Plata, Argentina. According to Church Militant sources, Martínez Perea is no fan of Amoris Laetitia, the pope's encyclical exhortation that has sparked controversy over whether it changed Church teaching regarding the admission to Holy Communion on the part of divorced couples who have civilly remarried. The sources theorized that the bishop's differences with Pope Francis may have cost him his seat. 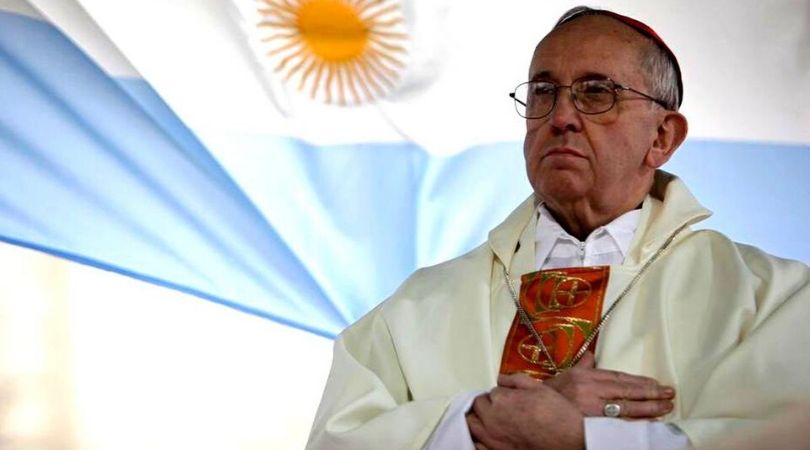