WASHINGTON (ChurchMilitant.com) - President Donald Trump's legal counsel announced yesterday that he will not cooperate in the Democrat effort to impeach him.

Pat Cipollone, the lawyer for President Trump, said in an eight-page letter addressed to Democrats, "Your unprecedented actions have left the president with no choice," adding, "In order to fulfill his duties to the American people, the Constitution, the executive branch and all future occupants of the office of the presidency, President Trump and his administration cannot participate in your partisan and unconstitutional inquiry under these circumstances."

The letter was addressed to prominent House Democrats Nancy Pelosi, Adam Schiff, Eliot Engel and Elijah Cummings, who are spearheading the effort to impeach Trump.

Cipollone's letter asserts, "[Y]ou have denied the President the right to cross-examine witnesses, to call witnesses, to receive transcripts of testimony, to have access to evidence, to have counsel present, and many other basic rights guaranteed to all Americans."

"You have conducted your proceedings in secret. You have violated civil liberties and the separation of powers by threatening Executive Branch officials, claiming that you will seek to punish those who exercise fundamental constitutional rights and prerogatives," it adds.

The letter goes on to declare:

Put simply, you seek to overturn the results of the 2016 election and deprive the American people of the President they have freely chosen. Many Democrats now apparently view impeachment not only as a means to undo the democratic results of the last election, but as a strategy to influence the next election, which is barely more than a year away. As one member of Congress explained, he is "concerned that if we don't impeach the President, he will get reelected."

Pelosi called the letter "manifestly wrong" and wrote it off as an attempt to avoid answering Democrats' claims he violated his oath of office by allegedly asking the government of Ukraine to investigate Joe Biden's ties with a Ukranian power company.

"The White House should be warned that continued efforts to hide the truth of the President's abuse of power from the American people will be regarded as further evidence of obstruction," adding, "Mr. President, you are not above the law. You will be held accountable."

Schiff, however, has a history of lying, especially when it comes to President Trump, who accused him of lying regarding the contents of his conversation with the president of Ukraine.

Trump exclaimed, "[Schiff] was supposedly reading the exact transcribed version of the call, but he completely changed the words to make it sound horrible, and me sound guilty. HE WAS DESPERATE AND HE GOT CAUGHT."

He went on to say, "Adam Schiff therefore lied to Congress and attempted to defraud the American Public. He has been doing this for two years. I am calling for him to immediately resign from Congress based on this fraud!"

It was also subsequently revealed that Schiff and his staffers at the House Intelligence Committee spoke with the supposed whistleblower who came forward with second and third-hand information claiming Trump was colluding with Ukraine to destroy former Vice President Joe Biden.

Adam Schiff therefore lied to Congress and attempted to defraud the American Public. He has been doing this for two years. I am calling for him to immediately resign from Congress based on this fraud!

Besides that, members of the so-called deep state changed the rules determining what kind of information whistleblowers can use. It no longer requires whistleblowers to have first-hand knowledge of potential wrongdoing and allows intelligence employees to report even if they have only "heard about [wrongdoing] from others."

This has prompted a second anonymous whistleblower to step forward, claiming first-hand knowledge of collusion between Trump and Ukraine.

Since he won the 2016 presidential election, Democrats have been waging a multi-front war against Trump, working to obstruct all his legislation, attacking his legitimacy as president and attempting to impeach him.

Pelosi and the Democrats have accused him of colluding with Russia to win the election, paying off ex-lovers, cheating on his taxes, declaring he is a white supremacist for enforcing Obama-era immigration laws and hating women for taking taxpayer money away from Planned Parenthood.

So far, all of their efforts to unseat him from the presidency have born no fruit. While the liberal mainstream media pushes this impeachment push as the bombshell of all bombshells, it's turning into little more than one more effort among many that may end in futility.

Trump is building a team to help fight against the Democrat onslaught. Trey Gowdy, the conservative South Carolina former congressman and former federal prosecutor, is being tapped to be on Trump's legal team.

Some are wondering, however, if Democrats have thought about the full implications of launching impeachment hearings since both Joe and Hunter Biden would be required to answer questions regarding their relationship with Ukraine.

In September, Senate Judiciary Committee Chairman Lindsey Graham called for the U.S. Department of Justice to investigate Joe Biden, who, in 2016, admitted in a panel sponsored by the Council of Foreign Relations that he did, indeed, exert pressure on Ukraine to end an investigation relating to his son. 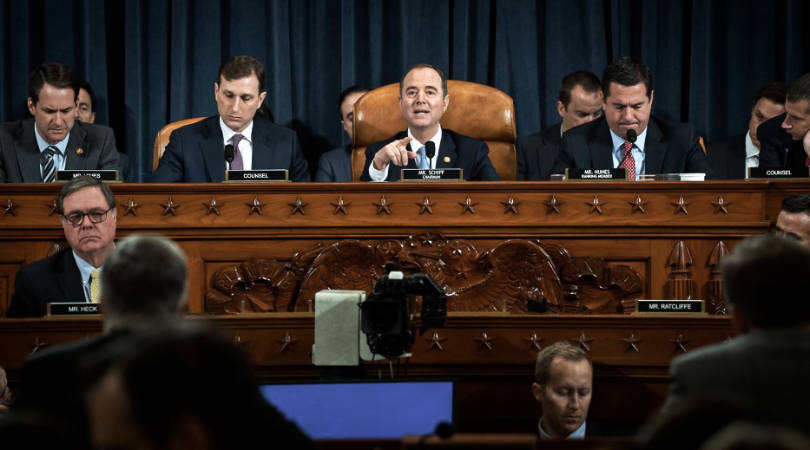