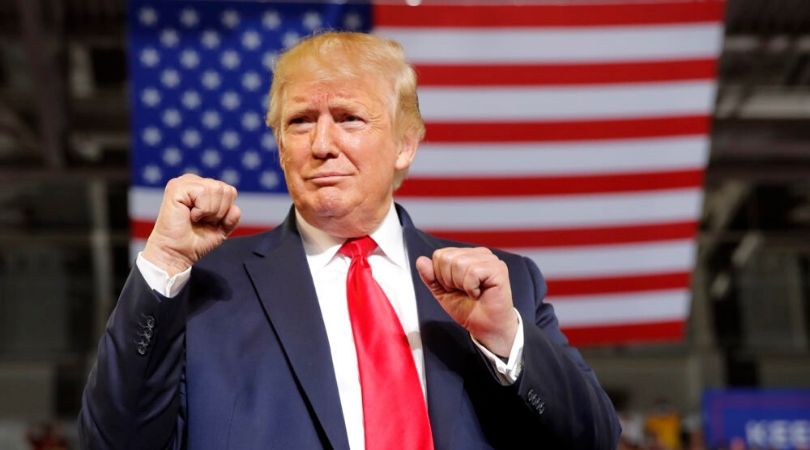 Trump announced his decision on Thursday at the Dana factory in Warren, Michigan during his visit promoting the trade deal he signed with Canada and Mexico a day earlier. The president told Dana personnel he'd made up his mind to help Michigan's Iraqi Christians, virtually all of whom are Catholic, earlier that day while en route to Michigan for his fifth visit as president.

We're going to make sure that we do everything we can to keep people who have been good to this country out of harm's way.

"We have some Chaldeans that are working here," said Trump. "And we talked about it long and hard on the flight in, and we're going to make sure that we do everything we can to keep people who have been good to this country out of harm's way."

"When I get back [to Washington] we're going to give those who need it an extension to stay in our country," he added.

Earlier in the day, Trump discussed with lawmakers efforts that had been underway to deport hundreds of Michigan Iraqi Christians. Yet Trump asked that they focus on creating an exception for those who are hard-working, have no criminal record and face persecution in their homeland should they be forced to return.

In 2017, the president authorized the U.S. Immigration and Customs Enforcement (ICE) to resume deporting from Michigan Iraqis with criminal records. Obama stopped deporting Iraqi immigrants with criminal records in 2010. But Trump recently learned that many law-abiding Iraqi Christians, who face persecution if deported, were also being sent back to their home country.

While traveling with the president, two Michigan lawmakers made the case for these Iraqis. Republican Rep. John Moolenaar and Democratic Rep. Andy Levin proposed a bipartisan bill that would pause deportation for Iraqi nationals for two years.

Levin blamed Trump for causing the deportation problem in Michigan.

"It should be noted that Iraqi nationals face these precarious circumstances only because President Trump broke with past administrations and started aggressively deporting Iraqis," he claimed.

Levin, however, wants Trump to extend his assistance to all Iraqi nationals.

"The president's words inspire me with cautious optimism, but let me be extremely clear — relief must be extended to all Iraqi nationals who would face danger if they are deported against their will," he said.

I know you have a wonderful Iraqi Christian community in Michigan.

Trump said on the plane ride earlier that day, Michigan lawmakers laid out a persuasive case for these law-abiding Iraqis.

"I said to them, 'I know you have a wonderful Iraqi Christian community in Michigan,'" he said. "And the congressmen were telling me on the plane how rough it's been for them. It's been a very tough time for a lot of Christians all over the world."

Trump didn't lay out any specific plans yet but did promise to start working on the issue when he returned to Washington. He did speak, however, of expanding their ability to legally stay in the country.

"And so we're going to be extending them," he said. "And a lot of people in Michigan have been asking for that. So we'll work with that when we get back with your great congressmen."

Trump said his overhaul of the North American Free Trade Agreement (NAFTA), signed the previous day, will add many new jobs for workers in Michigan. The new deal will allow Iraqi nationals looking for work to remain in the state, as it's projected to create 76,000 new jobs in the U.S. automotive sector alone.

"Over the next five years, USMCA is projected to increase purchases of American auto parts by $23 billion a year, and automotive investment by at least $34 billion," Trump told Dana workers. "And it's the very first trade agreement in decades endorsed by American labor."

The president said the creation of new jobs was a result of ending NAFTA.

"We just ended a nightmare known as NAFTA," stated Trump. "They took our jobs for a long time. It's a whole different ballgame, and it's going to be great for this plant."

Many Iraqis in the Detroit area look forward to being able to stay in the area, owing to the president's promised immigration protection and his creation of local jobs.