Trump Team: It’s Not Over 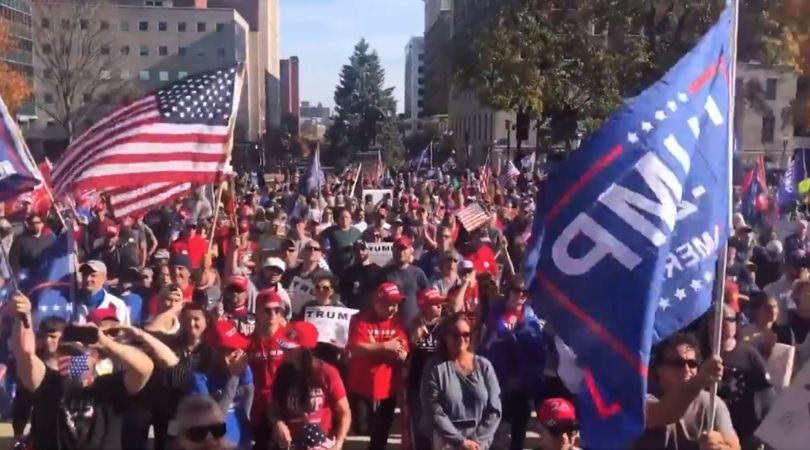 Trump fights on amid documented cases of voter fraud, irregularities

WASHINGTON (ChurchMilitant.com) - As ballots continue to be counted in several states and numerous lawsuits are being filed alleging voter fraud, President Trump's team has made clear: The fight is not over.

Various mainstream news organizations declared Joe Biden the projected winner of the election Saturday, referring to him as "president-elect," even though no electors have yet cast their votes nor has a single state officially certified its ballots. Ballots must be certified by Dec. 8, and electors cast their votes on Dec. 14.

The election isn’t over until all legal votes are counted and certified. There are still serious legal challenges that have been made, and until that process is resolved, the election is not final.

The American people deserve a fair and transparent process.

"The election isn’t over until all legal votes are counted and certified. There are still serious legal challenges that have been made, and until that process is resolved, the election is not final," tweeted House Republican Whip Steve Scalise. "The American people deserve a fair and transparent process."

President Trump was ahead in Pennsylvania by nearly 800,000 votes as of late Tuesday night, and was also leading in battleground states like Michigan, Arizona, North Carolina and Georgia — only for a number of these states to stop counting without explanation a little after 11 p.m. Counting resumed around 4 a.m., when no poll watchers were observing, as required by law.

Former New York City mayor Rudy Giuliani, now serving as Trump's lawyer, announced at a press conference in Philadelphia Saturday that they had an army of attorneys going to court Monday with as many as 10 lawsuits over voting irregularities in multiple states.

He focused in particular on the refusal of officials at Philadelphia Convention Center to allow Trump's team to observe the vote count for nearly two days.

Up early working on PA.

@realDonaldTrump election night 800,000 lead was wiped out by hundreds of thousands of mail in ballots counted without any Republican observer.

Why were Republicans excluded?

Tweet me your guess, while I go prove it in court.

"We have no way of knowing because we were deprived to inspect if a single one of those ballots was legitimate," he said. "That is unheard of, it's illegal, it's unconstitutional, and we will be bringing an action challenging that."

"And I emphasize to you it's only one of the many other infirmities in this election," he explained.

He noted that Joe Frazier and Will Smith's father, both deceased, somehow voted in the election after their death.

"In Philadelphia, they keep the votes of dead people secret," he said. "I'm not attacking the people of Philadelphia. I'm attacking a decrepit Democratic machine."

And on Maria Bartiromo's Fox News Show Sunday, Guiliani said, "There is strong evidence that this was an election that in at least three or four states, and possibly 10, it was stolen. In other words, it was based on false votes. Now, you can't let an election go into history without challenging that."

There are upwards of 50 witnesses, and this will be the subject of a lawsuit that we file tomorrow for violating civil rights for conducting an unfair election, for violating the law of the state, for treating Pittsburgh and Philadelphia different than the rest of the state, which is an equal protection violation, which goes under Bush v. Gore. We're at now 450,000 definite mail-in ballots that they separated from the envelope, threw the envelope away. We can never tell if they're valid or not.

The tally as of Sunday in Pennsylvania is approaching the margin that would trigger an automatic recount. Biden is ahead at 49.7% compared to Trump's 49.1%, leaving a margin of 0.6%. A margin of 0.5% is needed for a recount.

The Trump team is also filing a lawsuit in Arizona, claiming in-person voters' ballots were rejected in Maricopa County, which went for Trump by 62% on Election Day.

In Nevada, Trump's attorneys filed a federal lawsuit after a woman claimed she was not allowed to vote in person after someone else had mailed in her ballot with her forged signature. A political commentator on TV also claimed he was denied the chance, per federal law, to observe ballot counting. A federal judge tossed the lawsuit Friday, claiming there was no evidence of voter fraud.

In Georgia, where Trump was leading on Election Night but has since trailed behind Biden by a slim margin, the team demanded a recount. The Georgia secretary of state announced last week the margin was sufficiently narrow to trigger a recount.

Pennsylvania is also the subject of an impending U.S. Supreme Court case, which will look at the State Supreme Court's ruling allowing mail-in ballots to be received up to three days after Election Day without a postmark.

As Church Militant reported, with newly confirmed Justice Amy Coney Barrett on the bench, that case will likely result in a 5–4 ruling declaring the Pennsylvania Supreme Court's ruling a violation of the U.S. Constitution, resulting in every mail-in ballot received after Election Day being thrown out and subtracted from Biden's totals.

In Michigan, a major software glitch caused 6,000 votes — a quarter of the population of Antrim County, a place that typically votes red — to go to Biden. When the error was resolved, Trump came out in the lead.

The same software used in Michigan, Dominion Voting Systems, was used in Georgia and also caused votes to falsely flip for Biden.

Marcia Ridley, Spalding County elections supervisor, told Politico that the companies had "uploaded something last night, which is not normal, and it caused a glitch."

"That is something that they don't ever do," she said, admitting she did not know what the update contained. "I've never seen them update anything the day before the election."

Dominion is used in 47 counties in Michigan, and is also used in 30 states — including key swing states. If the glitch caused a quarter of the population of one Michigan county to falsely go to Biden, it is unknown how many countless ballots across hundreds of counties in 30 states — including battleground states crucial to determining the victor — erroneously took away votes from Trump.

The errors have led to growing calls to investigate Dominion.

1. I am calling on @dougducey to call a special session of the AZ Legislature under Article IV of our state constitution to investigate the accuracy and reliability of the Dominion ballot software and its impact on our general election. @Leo4AzHouse @FannKfann

"I am calling on Doug Ducey to call a special session of the AZ Legislature under Article IV of our state constitution to investigate the accuracy and reliability of the Dominion ballot software and its impact on our general election," tweeted Rep. Paul Gosar, House candidate in Arizona's fourth district. "No election results should be certified until a complete audit of the Dominion machine tallies is made."

Further, Dominion has ties to Democrat House Speaker Nancy Pelosi. The voting software company is represented by Brownstein, Farber, Hyatt and Schreck, a firm that includes Nadeam Elshami, who once served as Pelosi's chief of staff.

Republicans in Michigan confirmed Saturday they are contacting election officials in multiple counties that used Dominion software to investigate, while also recommending investigations in Nevada and Arizona, where the software was used.

All the glitches go in the same direction.

Saturday night, Georgia's secretary of state sent a team to Fulton County — which gave Biden a large share of votes — after an "issue" was found with its vote count.

"Fulton County has discovered an issue involving reporting from their work on Friday," said Brad Raffensperger. "Officials are at State Farm Arena to rescan their work from Friday."

A clerical error in Oakland County, Michigan caused Republican Adam Kochenderfer, running for the county board of commissioners, to lose to his Democratic opponent — only to find out later he had actually beat her by 104 votes.

Project Veritas published footage proving postal workers were being told in both Michigan and Pennsylvania to backdate ballots to Nov. 3 — a felony.

Richard Hopkins, one among two Pennsylvania whistleblowers, confirmed Thursday that he had spoken with federal investigators. His affidavit is now in the hands of Senate Judiciary Chairman Lindsey Graham.

Former Republican Speaker of the House Newt Gingrich says he is "the angriest" he has ever been in the entire six decades of his career.

"You have a group of corrupt people who have absolute contempt for the American people," he said on Fox News on Sunday, "who believe that we are so spineless, so cowardly, so unwilling to stand up for ourselves that they can steal the presidency."

Gingrich was referring to the Philadelphia Convention Center, where GOP pollwatchers from Trump's team were prohibited from entering the building for nearly two days. He was also referring to Cobo Hall in Detroit, where workers put up cardboard on the windows to prevent observers from seeing the vote count taking place inside.

One Detroit pollwatcher said the ballot counting stopped when GOP observers were present.

Trump's lawyers were not allowed inside the Philadelphia Convention Center until a court order was obtained mandating they be allowed entry. Even then, some attorneys were still being thrown out, while other GOP observers were being pushed back beyond the required six feet.

Democrats went to court to fight the order allowing Trump's team to enter the building.

Does anyone even try to make an argument why there is a good faith reason to block GOP poll watchers, or are we just supposed to ignore how highly suspicious that seems? https://t.co/7jlmdaGNy6

"Does anyone even try to make an argument why there is a good faith reason to block GOP poll watchers, or are we just supposed to ignore how highly suspicious that seems?" asked Buck Sexton, a former CIA analyst.

Representative Matt Gaetz of Florida is calling for a "full audit" of the votes, also blasting fellow Republicans who have remained silent and are refusing to speak up and fight for Trump.

"A full audit is absolutely necessary. We should get injunctions if necessary. And if I have to do it, I'll fight on the floor of the House of Representatives to stop the Electoral College from being certified." pic.twitter.com/D6SQChnTAQ

A number of Stop the Steal rallies were held at state capitols across the nation Saturday, including large ones in Phoenix, Arizona; Harrisburg, Pennsylvania; Atlanta, Georgia and Lansing, Michigan, among others.

Trump supporters continue to gather peacefully outside Maricopa County Election Headquarters in Arizona as well as Cobo Hall in Detroit insisting on transparency during the counting process.

While Christians around the nation continue to pray that voter fraud and Democrat interference in the election be exposed, Catholics specifically are urging that Americans pray the Rosary and offer various novenas to spare our nation.

Church Militant is offering a Novena for Our Nation beginning at 8 a.m. ET Monday, Nov. 9. It is a "special appeal to Our Lord and Our Lady, and particularly the Holy Spirit, to help President Trump and the nation through the embattled post-election season." The novena, followed by Rosary and Morning Prayer, will be livestreamed from the homepage daily.